Three brands are set to enter the wearables fray in June. 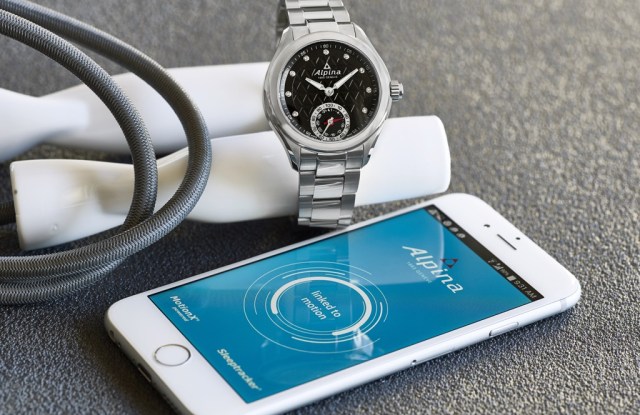 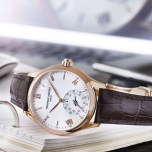 Frederique Constant, Alpina and Mondaine said at an event Thursday evening here that they have partnered with a new technology platform, MotionX, to produce smartwatches under their respective brands.

The three companies are a boon to Geneva-based Manufacture Modules Technologies Srl, developer of the MotionX technology platform that gives the watches their smarts. MMT is the result of a joint venture between Santa Cruz, Calif.-based Fullpower Technologies and Swiss company Union Horlogere Holdings that’s aimed at integrating its technology with Swiss watches.

More than 15 watch styles running on MotionX will become available globally in May. They’ll boast features such as more than two years of battery life, activity and sleep tracking, and backup via cloud storage.

The apps for the watches will work on both iOS and Android devices.

The new watches could help bridge the gap between high-tech wearables and fashion with what Mondaine chief executive officer Ronnie Bernheim called a “silent technology” play.

“We are in the watch business; we are not in the tech business,” he said. “It’s very subtle, so you don’t destroy the fashion by overriding it with this technology.”

Mondaine’s watches retail for around $200 to $1,000, and the new smartwatches are expected to be priced at the higher end of that range, Bernheim said.

With the technology and watch styles unveiled, Bernheim said it opens the conversation to integrate the technology in watches under brands such as Givenchy, Esprit and Puma, for which Mondaine affiliate Marlox Group has the licenses. Pierre Cardin, which Marlox acquired last year, is also up for branded smartwatch consideration, Bernheim said.

For sports-watch brand Alpina, the move into an intelligent device may help it nab more female customers, who are more likely to act on the personal-improvement measures the device promotes than men, said ceo Guido Benedini.

Men account for about 95 percent of Alpina wearers, he said.

“But we’re changing this,” Benedini said. “We saw a big opportunity with the ladies’ smartwatches….”

Alpina is expected to initially roll out four smartwatch styles for women and four for men that will be consistent with retail prices of its watches on the market, ranging from $500 to $1,000.

That’s the same range for Frederique Constant pieces and where its smartwatches will start, with later price reductions possible, said cofounder Peter Stas.

The disconnect between the buzz over wearables and actual adoption among manufacturers of apparel or accessories has largely been the technology itself, but that’s changing, Stas said.

“It is because of technological issues,” he said. “A lot of brands want to do [wearables]. Now the technology, it becomes small enough. Power consumption becomes good enough…and it still looks like a horological Swiss watch.”