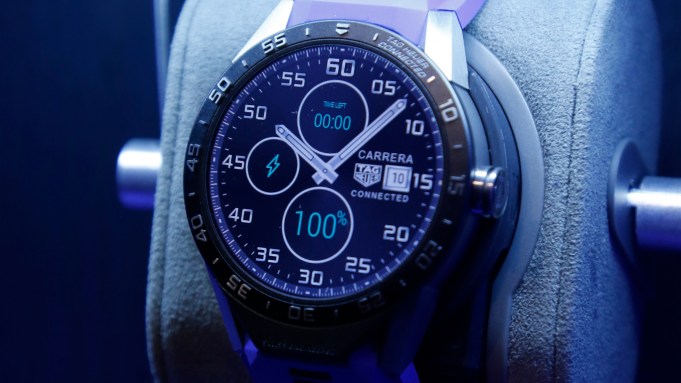 NEW YORK — “This is a marriage of Watch Valley and Silicon Valley.”

So proclaimed an ebullient and energetic Jean-Claude Biver, president of the watch division of LVMH Moët Hennessy Louis Vuitton and chief executive officer of Tag Heuer, as he unveiled Tag Heuer’s new Connected smartwatch developed in conjunction with Intel Corp. and Google. The press conference Monday morning on the 24th floor of the LVMH Tower on 57th Street made Tag Heuer the first Swiss watch company to take on Apple and jump into the smartwatch category.

The importance of the $1,500 Tag Heuer Connected watch was indicated by the attendance of LVMH chairman and chief executive officer Bernard Arnault, as well as Brian Krzanich, ceo of Intel; David Singleton, vice president of Android engineering at Google, and Andre Schaller, consul at the Consulate General of Switzerland of New York City.

“I tried [the watch] this morning,” Arnault said, flashing his wrist. “So far, so good.”

Later, he proudly showed off an employee’s smartphone photo of the Tag Heuer store on Fifth Avenue. “Look, there are already lines forming outside the store to buy one,” he said, smiling.

The watch, a collaboration with Intel and Google, was first teased at this year’s Baselworld Fair in March, but details about the timepiece were kept under wraps until today’s release.

Arnault connected the launch to creative efforts throughout the group, pointing to the LVMH Tower itself as well as the Fondation Louis Vuitton in Bois de Boulogne in Paris created by Frank Gehry. “The watch is a good expression of what we do in the group,” the luxury titan said. “This watch is an illustration — as well as this building or the foundation we did in Paris with Frank Gehry — of the most important values of the group, one being creativity, architecture.

“The second value which is illustrated today is quality. Quality is key in everything we do — quality of the products, quality of the watch….Jean-Claude Biver’s done for many years with us, starting with Hublot,” Arnault said of the first connected watch to be brought to market by a luxury Swiss watchmaker. “The last illustration of what we do together — and Jean-Claude is a good example — is perseverance, of obstinacy. When he [Biver] told me when he saw companies doing [smart]watches, ‘Look, we are going to do a watch, we’re not going to do a computer. Even if we have a computer inside, it’s a real watch.’”

The Tag Heuer Connected watch went on sale at 20 doors in the U.S. immediately following the press conference at noon, including the flagship, Macy’s Herald Square and Tourneau Time Machine. The oversize timepiece is 46 mm in diameter, and has a face, back and lugs that are fashioned from grade 2 titanium. Modeled after the brand’s classic Carrera watch, a textured black, rubber strap can be switched out for six other colors (sold separately).

“The biggest challenge was to make a connected watch that didn’t look like a connected watch,” Biver told WWD Monday during an interview before the conference, explaining that the point of differentiation between Tag Heuer’s device and other smartwatches, including the Apple Watch, is “optics.”

He said he can always spot the connected watch — no matter what the brand — and pointing to his wrist, he called Tag Heuer’s version the first that’s not discernible as a piece of technology.

Google’s Singleton named it the “world’s smartest luxury watch” and Intel’s Krzanich aptly called the partnership a “marriage between Silicon Valley and Swiss craftsmanship.” It took roughly a year to bring the idea from conception to market. Biver said the Intel technology used in the timepieces will be exclusive to Tag Heuer for a period, but he wouldn’t say for how long.

No one can argue that Apple solidified its position as a luxury brand after revealing in September that it had partnered with Hermès on an Apple Watch. The three products in the collection, which came out early last month, range from $1,100 to $1,500.

Biver said there are two reasons why Tag Heuer is the first Swiss watchmaker to launch a smartwatch. The first is that he wants the brand to retain market share and not send customers to another brand to buy Tag Heuer’s products, such is the case with Hermès and Apple. Secondly, he hopes that getting into the smartwatch category will bring a new customer to the 155-year-old legacy brand, one who is tech savvy and is looking to invest in a connected timepiece.

But what about the skeptics who think that fashion brands will never be able to play in the smartwatch space — or that the category itself will never live up to expectations? Biver said there will always be skeptics — and he welcomes, if not appreciates, their take on the nascent category because it gives him perspective and makes him think even harder when making decisions.

Biver told the audience at the event (which was also live-streamed on YouTube) that in the several weeks that he’s been wearing a Tag Heuer Connected, no one has ever asked him if it was a smartwatch. For him, that is the best result he could have possibly asked for.

He did predict that in the next two years, 10 to 20 percent of the brand’s watch sales will consist of smartwatches — never a majority of sales, but a large enough portion to make smartwatches a substantial sector of the businesses.

Biver is not at all bothered by the fact that the device is not entirely Swiss made (in order for a watch to be “Swiss made,” 100 percent of the movement, production and assembly must occur in Switzerland). The first batch of Tag Heuer Connected was actually assembled by Intel, but the second run will be manufactured in Switzerland.

He consistently emphasized that the watch is not like other smartwatches in that it will never be obsolete. Unlike other devices of its kind, there is an option to turn the smartwatch back into a mechanical timepiece for $1,500 — ensuring that a Tag Heuer Connected can’t be rendered obsolete in two or three years or even a decade’s time.

This circles back to Biver’s obsession with the notion of “eternity.” When the executive proclaimed he wanted to get into smartwatches and was met with criticisms, such as going the tech route will erode a traditional timepieces’ lifespan or that the technology becomes outdated every few years, he came up with a solution.

If a consumer owns a connected watch from Tag Heuer and they don’t wish to buy the next generation — but don’t wish to dispose of it either — they can go to one of the brand’s stores and have the watch transformed into a mechanical one. The fee for the service is $1,500 and only applies to Connected watches being made into traditional timepieces. If one wishes to own a newer version of a Tag Heuer Connected, they have to purchase one at the same price, as one would have to replace a smartphone with a newer version.

Following the presentation, the three executives fielded questions about topics ranging from battery life — 18 to 20 hours, but it depends on usage — to how the proceeds of the watch will be divvied up (Krzanich indicated the deal is similar to Intel and Google’s other supplier arrangements). While Google has developed the Android system for smartphones, the watch also will work with the iPhone as well.

Biver said although the brand started with men’s — men’s timepieces dominate 67 percent of the business — a woman’s Connected watch is something the brand must do and quickly. He seemed to indicate one was already in development and would have to be launched within three years.

As the event wound down, Biver proceeded to cut a massive wheel of cheese by hand, made at the farm he owns in the Swiss Alps, to give everyone in the audience a present. Arnault was so bemused by the process that he snapped a photo of Biver with his smartphone. Biver called the cheese a present for everyone in attendance, and went as far as to present Arnault, Singleton, Krzanich and the event’s host Ben Clymer, founder of watch Web site Hodinkee, with ornate, Tag Heuer branded cowbells which Arnault sheepishly accepted.

Biver then enthusiastically worked the crowd as they oogled the new device, at one point spotting the leather-clad Peter Marino, who had been sitting front row beside Arnault. “Peter!” Biver exclaimed, hugging the interior designer. “I didn’t know you were here.”

“I came just for you,” Marino replied. “I wouldn’t come for anyone else.”

To Biver, the launch was proof that Tag Heuer — and the Swiss watch industry — is as much about the future as it is about the past. And he soon will have some competition from another Swiss watch brand: Breitling has revealed plans to launch its own smartwatch on Dec. 16 in Manhattan.

Regardless, Biver doesn’t think his company is late to the smartwatch game.  “If we [are] too late after six months [since Apple launched its watch] then it would [means] that Connected watches are dead. You cannot be late on such a project in six months,” Biver said. “We’re very early. We’re the first Swiss watch brand to have Intel Inside, so it’s not late at all.”