On Thursday, Tiffany will launch the Tiffany CT60, a collection of watches inspired by founder Charles Lewis Tiffany. 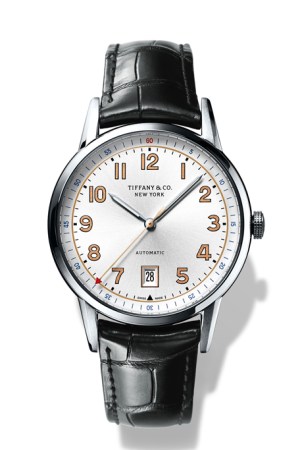 NEW YORK — Tiffany has a long history in the men’s watch business, but for the past several years, the jewelry retailer hasn’t emphasized the category. That’s about to change.

This story first appeared in the April 1, 2015 issue of WWD. Subscribe Today.

On Thursday, Tiffany will launch the Tiffany CT60, a collection of watches inspired by founder Charles Lewis Tiffany. The watches are patterned after a Tiffany & Co. gold watch given to President Franklin Roosevelt in 1945, but with a modern twist in design as well as marketing. The retailer is planning to launch the collection with a social media campaign.

“We wanted to reach out to men and let them know there’s something for them at Tiffany,” said Linda Buckley, vice president of public relations for Tiffany North America. She said the company had started selling men’s watches in 1847, “but it’s a while since we focused on them.”

Tiffany’s recent history with watches has been sketchy. In 2013, a Dutch arbitration court ruled that the retailer had to pay $448.79 million in damages to Swatch Group after a partnership formed in 2007 to develop watches under the Tiffany name was unsuccessful. What had been planned as a 20-year deal ended in 2011.

This time, Tiffany is taking on the men’s market itself with CT60. To promote the new collection, it has turned to four influencers — Victor Cruz, wide receiver for the New York Giants; Alexander Gilkes, cofounder of auction house Paddle8; Marcus Samuelsson, chef and owner of the Red Rooster and Streetbird Harlem restaurants, and Nick Wooster, former fashion director of Bergdorf Goodman. The men were shot by Ann Street Studio for a digital look book and a video docuseries, where in 15 seconds they speak on the importance of time and what it means to them.

The concept came from Charles Lewis Tiffany’s catchphrase of a New York Minute, which he coined in 1853 when he erected the nine-foot Atlas clock above his store in New York City. The clock is still ticking above the store on 57th Street today.

Cruz said his relationship with Tiffany dates back to 2012 when the Giants won the Super Bowl. “At the ring ceremony, I found out that not only did Tiffany make our championship rings, but also the Lombardi trophy,” he said. “I remained in contact and when they reached out to me about the release of a men’s watch, it was a no-brainer.” He added that he’s bought Super Bowl memorabilia at the store in the past, as well as a piggy bank and necklace for his daughter Kennedy’s first birthday.

Cruz said the Tiffany CT60 collection is similar to his own personal style, which he described as “very sleek and stylish. It has a very clean aesthetic, which is what I love the most.”

With the watch, he added, he’ll be able to make sure he sticks to a schedule. “I am an extreme stickler for time,” he said. “Playing for a head coach like Tom Coughlin has made this more apparent for me, as every clock in our facility is five minutes ahead. Working hard every day has truly given me a sense of how time is so precious and you can’t get any seconds, minutes or hours back. Therefore, you have to make every moment count.”

Wooster said watches are one way men can “make a mark. It’s a style thing and a functional thing. And in this age of smartwatches, this is the best time to launch something beautiful. I’ll never give up my watch, I’m naked without it.”

Unlike Cruz, Wooster said he’s a “loosey-goosey guy forced to conform to a schedule, and the only way I can do it is by looking at my wrist. I’m busier than ever these days and time is the ultimate luxury — I don’t have enough of it.”

The Tiffany CT60 will include 23 styles ranging in price from $4,250 to $19,000. The top-of-the-line model is an 18-karat rose gold calendar watch with a 42-hour power reserve, shock-absorption system and sapphire crystal display back; it’s available in a limited edition of 60 that is numbered on the case.