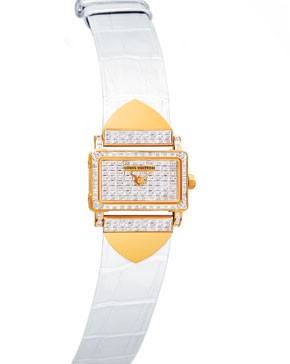 PARIS — Marc Jacobs actually designed his first watch for Louis Vuitton 12 years ago, but only luxury titan Bernard Arnault saw the sketch. It was part of a submission to LVMH Moët Hennessy Louis Vuitton that ultimately won Jacobs the job as Vuitton’s artistic director.

The designer revisited some elements of his original design for the Emprise watch he unveiled on Sunday after the Vuitton fall fashion show here, including placing the LV logo at 5 o’clock. The square, dressy timepiece is slated to arrive in Vuitton stores starting in June, retailing from 6,950 euros to 90,000 euros, or $10,425 to $135,000 at current exchange rates. The watch comes in four sizes for women and men; the most elaborate version is pavéd with diamonds.

“It’s really chic and really modern,” said Jacobs as he wound a chunky, plain-gold style around his wrist. “I like jewelry-type watches.”

In fact, Jacobs, who recently started wearing diamond earrings, rings and necklaces, said that he sometimes wears two watches — and not because he needs to. “Nobody really needs to wear a watch these days, because we all have cell phones and BlackBerrys,” he explained. “But I’d rather wear two watches than one that tells time in two places.”

Indeed, some of the models parading in Sunday’s Vuitton show wore an Emprise on each wrist, demonstrating their potency as jewelry. Yet the design is firmly rooted in Vuitton’s heritage, the distinctive hardware on the crocodile strap recalling the corners of its trunks.

“The form and the shape of the watch came from the trunks,” Jacobs said. “I wanted it very clean and contemporary-looking. Ultimately, I think it should become iconic.”

Vuitton entered the watch category in 2002 with the sporty, drum-shaped Tambour style. The timepiece met with strong demand and was followed up in 2003 by a version by Japanese artist Takashi Murakami and an 18-karat gold collection aimed at women. In 2005, Vuitton expanded its timepiece offering

with the Speedy. The Swiss-made Emprise is expected to expand the franchise in the dress category.

Jacobs is certainly a watch aficionado, owning more than half a dozen styles, including new and vintage Van Cleef & Arpels, a Rolex, a vintage Cartier, a Solange Azagury-Partridge and now an Emprise.

“I love looking through those watch catalogues from the auction house,” he said. “It’s just something I’m into right now.”