The Giorgio Galli S1 Automatic timepiece is the first to bear the name of the group’s design director.

Celebrating its 165th anniversary, Timex is emphasizing the expertise of its design director Giorgio Galli, who started collaborating with the company in 1996.

The Giorgio Galli S1 Automatic timepiece has made its debut on the company’s online store with a price tag of $450, slightly above the usual price range for the company’s watches.

The 41-mm stainless steel timepiece encapsulates a Japanese Miyota 9039 automatic movement, visible from the see-through back case, which Galli said he pioneered in 1996. A black synthetic rubber wristband gives the object a casual and understated look.

“This project was not born out of a marketing or commercial proposition, rather it aims to celebrate the iconographies and traits that are my signatures,” Galli explained. Among them, the designer cited a small ruby gem mounted at the center of the watch’s dial.

“I wanted a product with subtle details that never go out of fashion, as generally I get bored after two weeks wearing the same watch,” he contended.

Galli didn’t want to tap into nostalgia, rather he “wanted the watch to be sleek and modern,” he noted. Informed by his passion for photography and the sharp contrasts between lights and shadows, a double-curved mineral glass and grooves on the sides of the case reflect the light enhancing the watch’s sculptural effect.

For the launch, Timex opted for an online-only approach. Galli noted the move reflects the company’s desire to tell a story. “If we had decided for the traditional wholesale channel, the message would have been diluted, disappearing among other watches.” 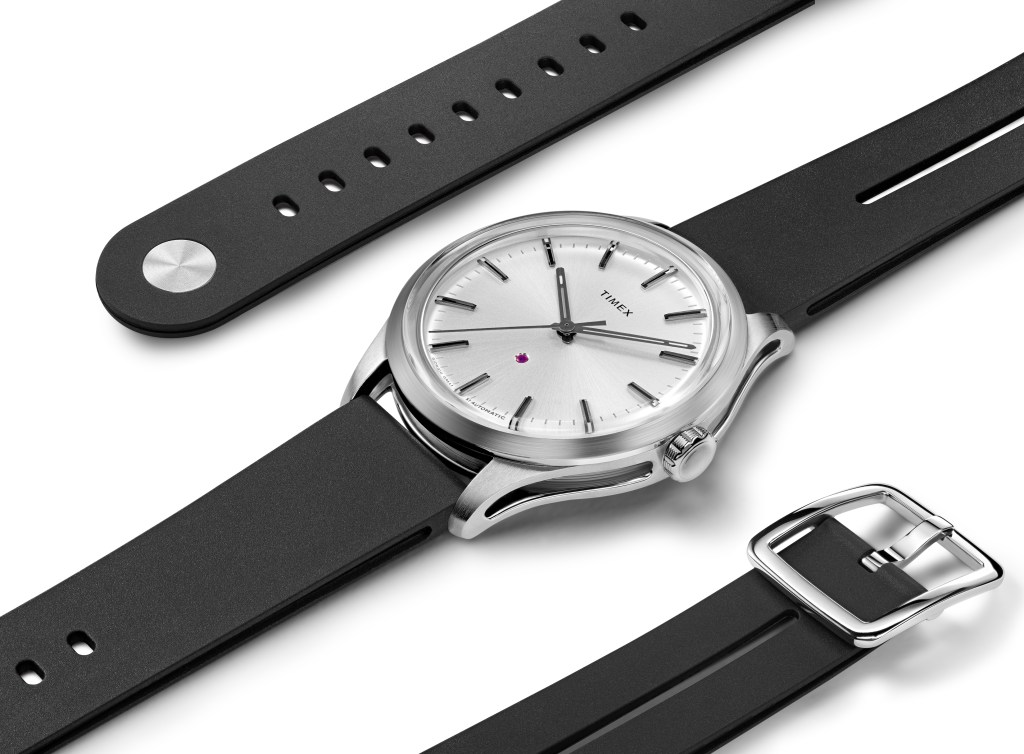 The upscale design is to be the first of a series of S-labeled automatic timepieces, which Galli said could be evolutions of the first iteration or new styles for a range of watches that celebrate the pioneering approach of Timex.

“Timex has always put innovation at the core of its value proposition,” Galli noted. The designer said the company was the first to set up a production line for wall clocks and to use industrialized materials, in addition to introducing the first smartwatch in partnership with Microsoft in 1989.

Although he was cautious about forecasting sales for the timepiece, Galli said it was a brave move for a company that “has championed the mass-market watch category since its inception with the ‘$1 watch’ slogan.” In 1896, Timex, then known as Waterbury Clock Co., supplied Ingersoll Watch Co. with the first dollar pocket watch.

After a two-year stint at the Swatch Group serving as art director for the Swatch brand in the Nineties, Galli founded his own design firm dedicated to watch, industrial and product design, as well as corporate identity in 1994, backed by Benetton’s holding company 21 Investimenti. In the watch industry, Galli has worked for several companies including the Movado Group, Seiko, Citizen and Timex Group.