Contemporary watch collection will sell on brand’s Web site, and at Liberty, Selfridges and Nordstrom. 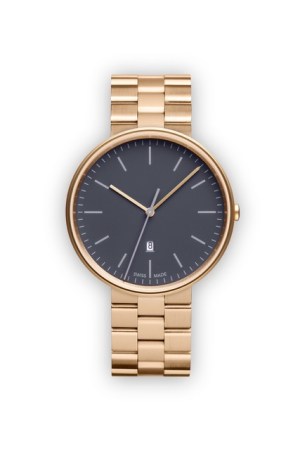 LONDON — The London-based contemporary watch label Uniform Wares is expanding its offer with a collection for women.

Known for its modern aesthetic, the label began with collections that were unisex, but mostly geared toward men.

Following a shift in production to Switzerland, the label’s founders Oliver Fowles and Patrick Bek decided to eschew the unisex tag and create a collection that experimented with new details and materials, specific to the brand’s female audience.

“We didn’t want the collection to be a dilution of what we’re doing with men’s, or to feel like we’re doing it half-heartedly,” said Fowles.

The brand extension was a result of both research and feedback from customers requesting a women’s collection. That’s why Fowles anticipates the launch will appeal to “the woman who has been stealing her boyfriend’s Uniform Wares watch all along.”

The collection took two years to create and comprises 18 styles across two families known as the C-Line and the M-Line. The C-Line styles feature soft curves and dome-shaped glass, while the M-Line stands out for its symmetrical design and wider cases.

Fowles and Bek worked closely with their label’s design director Michael Carr to refine key styles for the women’s collection.

According to Carr, the focus of his design process was the architecture of the watch, and making a series of subtle, technical changes that made it lighter and more compact.

“The art of watch design is being able to fit everything into a really refined, compact space. We took the chronograph that we had designed for men’s and tried to reduce it down to make it 3-mm. (0.12 inches) smaller,” he said.

Carr also worked on refining the triple-link bracelet. “The refinement took three years to develop; the triple link is a really unique construction for a bracelet and we shaped the thickness down to half a millimeter,” he said.

“Creating something smaller or thinner is more difficult in terms of production so in many ways, the women’s collection was a bigger challenge,” he added.

Developing a women’s collection also presented an opportunity for the label to use new materials, such as alligator skins and grosgrain leather sourced from Florence. They were also able to introduce polished surfaces.

Additionally, they worked with a more playful palette that included dust pink and brown to complement the new rose gold and natural finishes. The men’s wear collection is mainly focused around gunmetal finishes.

Despite the addition of more feminine materials and colorways, the brand was looking to maintain the androgynous feel for which it’s known. “We wanted to feminize the watch without being obvious or patronizing,” said Carr.

The collection will be stocked at a number of the brand’s existing retail partners including Liberty, Selfridges, Nordstrom and The Bay in Canada, as well as the label’s Web site. E-commerce is a key channel for the brand, with fifty percent of sales coming from online.

Fowles and Bek also said choosing a contemporary price point was a conscious decision aligned with customers’ mentalities about spending their money on a considered design product, rather than buying into the status a watch can offer.

“We never aspired to be a luxury brand because luxury is kind of disproportionate. The actual value of the product is based on heritage and experience or craftsmanship, and we didn’t want to be one of those brands that create false luxury around products. Our watches are premium products, priced accordingly, and you are paying for the product, not status,” said Fowles.

“One of the reasons we are in watches at the moment was to fill that void in the watch industry which had always been frustrating to us as consumers.”

Having studied product design alongside Bek — and specializing in furniture — the duo launched the brand in 2009 to fill what they saw as a gap in the market.

Their designs got positive responses from retailers, and their first collection is currently on display at the Museum of Modern Art in San Francisco.

The label is looking at the women’s collection as the first step in an ongoing growth arc. They plan to expand their offer around products such as leather goods and eyewear, with a number of collaborations set to roll out in the next year.

“We find a lot of common ground with brands like APC, which are not cheap but by no means disproportionately expensive. It’s that middle ground that resonates with a lot of people,” said Fowles.