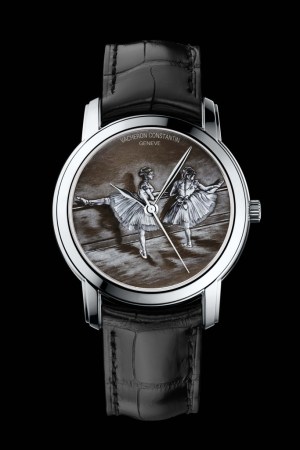 NEW YORK — Vacheron Constantin is hitting the ballet. The Swiss watchmaker will unveil three one-of-a-kind watches at this evening’s New York City Spring Gala, held at Lincoln Center. The company will also serve as leading corporate sponsor of the gala, part of a three-year partnership initiated in 2013.

The three pieces, which each cost $140,800, are part of the brand’s Hommage à l’Art de la Danse series within the Metiers d’Art collection. Each watch face depicts its own Edgar Degas painting; this collection includes “Dancers Practicing at the Barre” (1877); “Dancers Near a Set” (1888), and “Two Dancers Entering the Stage” (1877). Each depiction is crafted by an individual master enamelist, and may take up to two-and-a-half months to complete. “It’s an art of technicality,” said creative director Christian Selmoni. “The enameler creates layers and layers with different effects. To be an experienced enameler, you have to have at least 10 years of experience. It’s demanding from an artistic point of view, as well as technically.”

To create each piece, the enameler uses the grisaille painting technique, a term for painting done entirely in monochromatic or near-monochromatic shades. The technique is typically applied to black enamel, but the house artisan instead selected a translucent brown enamel to increase the level of depth to each etching. After applying the base, the artist adds touches of Limoges white enamel, a rare powder mixed with oils. Each layer must then be fired at a specific heat for a certain amount of time.

“Each enamel or pigment doesn’t melt at the same temperature, so you have to know which needs to start when,” said Selmoni. “It’s very tricky — if you make any mistake, you just ruined the entire piece…and you cannot industrialize this art form.”

Vacheron Constantin founded Metiers d’Art in 2007 as a platform to showcase artisanal traditions of fine watchmaking, such as enameling. In order to keep the values of the collection going, the brand limits the number of pieces released each year. “It’s important for us to keep our collection very low,” Selmoni said. “We don’t want to lose their value. That’s very important. We can easily double the collection, but we simply don’t want to.”