As the sector continues to struggle, brands at Baselworld focused on mechanical watches and vintage-looking styles. 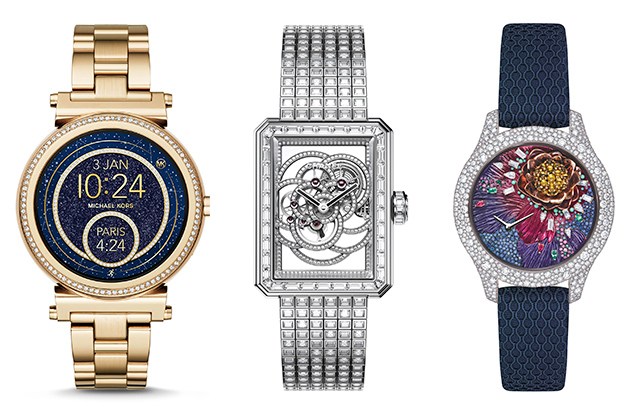 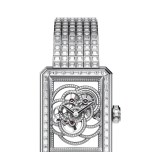 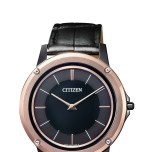 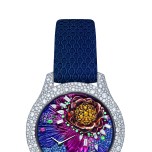 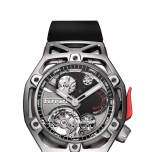 BASEL — Going back to their roots.

That seemed to be the main trend at the Baselworld fair here as watch and jewelry brands — suffering the impact of the turmoil in U.S. retailing, especially among department stores — emphasized vintage-looking styles and mechanical watches, as well as thinner movements.

Watchmakers also explored lower price points through simpler models, amid criticism that top Swiss brands had pushed too far upmarket and let prices soar. As at SIHH in Geneva in January, the “vintage” and “classic” designs omnipresent throughout Basel were intended to reinforce consumers’ sense of acquiring items of cachet and value. “Not everyone can afford a $20,000 watch,” said Jeffrey Cohen, Citizen’s president.

“We’ve seen the more classical returning, compared with the extra- or oversized. But that’s been going on for a while. And vintage is a response to buyers’ search for timelessness and value,” said Marc Hayek, head of Swatch Group’s luxury watch brands.

Other conspicuous design trends included the rise of mechanical watches with transparent backs — allowing buyers to appreciate and show off their complex workings. “An open back shows the mechanism and gives value to the watch,” said Ricardo Guadalupe, chief executive officer of Hublot. Transparent backs also discourage counterfeiting, as buyers can see more of what’s inside.

Thinner movements for men, and ever more dedicated mechanical watches for women, were two other key trends. At just 2.98 millimeters (including its 1 millimeter thick movement) Citizen’s light powered Eco-Drive One came tops for slimness. Bulgari’s Octo Finissimo claimed the same for mechanical automatics.

Meanwhile, the shakeout in fashion watches was an opportunity for couture houses with more genuine horological credentials to shine. Nicolas Beau, international director of watchmaking at Chanel, said his company regarded Baselworld as a showcase for the brand’s 30 years of watchmaking.

“Back in 1987, there was no such thing as a genuine feminine watch, just ‘ladies” sizes of men’s models. In 1987, we were nowhere. Today, our stand is on the ground floor of the Basel fair. You don’t get placed there just by paying money,” he said.

Having established manufacturing and product prowess, Chanel wants to persuade more people about its watchmaking abilities and avoid being eclipsed by its better-known fashion and beauty activities. Introducing its new in-house Caliber 2 movement into the new Première Camélia Skeleton helped convey that message.

Likewise, Christian Dior celebrated its 70th anniversary by stressing creativity had made it a genuine watchmaker. Having introduced its own watches in 2001 after previously licensing them, the company demonstrated its confidence with its Grand Soir Botanic and Grand Bal Galaxie Pavo limited editions priced up to 285,000 euros, or $302,000 at current exchange.

Some watchmakers tried to downplay February’s disappointing 10 percent drop in exports, which was the 20th straight month of decline. François Thiébaud, ceo of Swatch Group’s Tissot brand and head of the Swiss Exhibitors’ Committee at Baselworld, noted distortions caused by the timing of this year’s Chinese New Year. But even taking January and February together, exports remained down a discouraging 8 percent year-over-year — albeit less than the 9.9 percent drop in 2016, which followed a 3.3 percent decline the previous year.

“I can’t say for sure exports will be positive this year. But the two biggest markets — Hong Kong and the U.S. — both had political issues in 2016. I have the feeling Americans in particular will be readier to spend now. Let’s wait until May or June before making predictions,” said Thiébaud.

Given the continuing tough times for the sector, few were surprised to see 200 fewer exhibitors at the 100th edition of Baselworld, where optimism generally was scarce. Even lower priced, non-Swiss watch brands, which have advanced amid increasingly price-conscious consumers, warned of the impact of online commerce on traditional U.S. retailers, particularly the big department store chains that account for a significant portion of the sales of lower-priced fashion watches and jewelry.

“The digital landscape has changed things,” said Efraim Grinberg, chairman and ceo of Movado. “The U.S. fashion watch business is now challenged as retail in general, and department stores in particular, are going through a cycle.”

Among absentees this year were fashion brands, many smaller pearl companies and even some bigger names, like Timex, manufacturer of Ferragamo and Versace watches under license. Some blamed the large sums required for a Baselworld presence, ever harder to justify in strained circumstances. Reflecting such criticism, next year’s show will be two days shorter, at six rather than eight days, reducing exhibitors’ outlays. Visitor numbers were also down, at 106,000, 4 percent below 2016.

Whether conditions for jewelers and watchmakers will improve by March 2018 is another matter. Jewelers, as at SIHH, were more upbeat than watch brands. But both bemoaned the decline in traditional retailing in the U.S. And makers of Swiss mechanical watches in particular remained unsure whether falling exports were just a prolonged cyclical factor (albeit the longest on record) or indicative of deeper changes in consumer habits with the rise of “connected” timepieces from disruptive outsiders.

February’s watch data was particularly uncomfortable for managers, like Thiébaud, from the Swatch Group — easily Baselworld’s biggest exhibitor before Rolex. The data came just days after group ceo Nick Hayek had predicted group sales would climb by 7 percent to 9 percent this year.

“What our group chief executive said is right for Omega. Business in Asia and China is much more positive and we’re looking at a lot of orders,” said Raynald Aeschlimann, boss of Swatch Group’s Omega brand. “The market seems reasonably good” with the U.S. in particular offering considerable potential, he observed. “Omega this year could grow strongly because we still aren’t at the market share we’d like in the U.S.”

Others were more cautious, if still positive. Jean-Claude Biver, head of watches at LVMH Moët Hennessy Louis Vuitton, which owns Tag Heuer, Hublot and Zenith, agreed the absence this year of big political events like the U.S. presidential election offered recovery potential. “I can be slightly more optimistic than in 2016. If everything goes really well, the market could pick up by 3 to 4 percent,” he said.

However, Biver differentiated between his three brands. Tag Heuer, which has pushed strongly into “connected” timepieces, expects another record year. Likewise, Hublot envisages further gains after record volumes and revenues in 2016. Reflecting its confidence, Hublot launched its Techframe — a limited-edition collection celebrating an alliance with Ferrari and the 70th anniversary of the legendary Italian sports car marque, which designed the new timepiece. “When your name is associated with a brand like Ferrari, it’s a transfer of prestige to your brand,” noted Guadalupe.

Zenith remains a problem, though. The Swiss brand performed less well last year than the industry in terms of sales, revealed Biver. After numerous changes of ceo, he has now taken control, promising wholesale renewal. Renowned for its El Primero movement, Zenith had become a “prisoner of the past,” he acknowledged. “You must bring your tradition to the future.” But while sales by the end of February had moved into line with the market, even the ebullient Biver was unsure whether Zenith would record higher sales and revenues by year-end.

Thierry Stern, head of family-owned Patek Philippe, was also cautious, in spite of an ongoing 500 million to 550 million Swiss franc, or $495 million to $545 million, expansion at the group’s Geneva base, due to open by the end of next year. “The market? I don’t know. Maybe we’re reaching bottom. We saw a slight improvement coming, but it’s really not clear. I hope things will at least be stable in 2017,” he said, revealing Patek would limit this year’s production to 2016’s 58,000 pieces. “Maybe I’m too low, but I don’t have any shareholders pushing me.”

Lower-priced watchmakers were more sanguine. Bulova, owned by Japan’s Citizen, reported a successful 2016, largely on the resilience of the $200 to $500 price range on which it concentrates, explained Robert Christiano, executive vice president of marketing.

Many of the lower-priced brands have led the push into connected and smartwatches — more apparent than ever this year. Skepticism remains high, though, particularly in Switzerland. “Do you remember your first mobile phone?” asked Thiébaud. “But I bet you remember your first watch,” he added, alluding to the emotional role of traditional timepieces.

Others highlighted the plummeting resale values of connected timepieces because of the sector’s frequent product cycles. So while Swatch Group’s Tissot and Swatch brands will introduce more connected watches, they will remain only a small proportion of its total production, said Thiébaud.

Tag Heuer unveiled its second-generation connected model, with sales this year targeted to reach 150,000 after 56,000 of the first iteration were sold in 2016. “We want to be the prestigious offer among connected watches,” said Biver, revealing the new version would cost 1,650 Swiss francs, or $1,634. That is 150 Swiss francs, or $149, more than its predecessor, but the new model now includes GPS and near-field communications. The updated model also offers greater design flexibility through modular construction and, like the first version, can be swapped for a mechanical timepiece on obsolescence.

Breitling, whose first connected model, the B55 Exospace, appeared shortly after Tag’s debut, also appeared content. “There has been an encouraging level of sales, and we will continue to present new versions with specific functions and applications,” said Jean-Paul Girardin, executive vice president.

Meanwhile, Movado introduced its first connected watch, developed with Google and Qualcomm. The newcomer, priced from $495 and going on sale in August, will offer five different dial designs and assorted color permutations. Michael Kors, made under license by watch group Fossil, unveiled “Sofie” and “Grayson” to complement “Dylan” for men and “Bradshaw” for women, its first two connected watches that premiered at Baselworld last year. The new couple, costing $350 to $395 when sales start in September, add full round displays and updated Android 2.0 software. All future men’s watches will incorporate some smart technology, the brand added.

While smartwaches may not suit all, digitization is palpable across the industry. “Connectivity and functionality are definitely part of the future for part of the watch industry,” admitted Hayek. He said Breguet and Blancpain, Swatch Group’s most prestigious brands, would “stay mechanical.” But, while unlikely, certain features could one day be incorporated onto watch straps or bracelets, he acknowledged.

Even skeptics recognized the upheavals in retailing that smartwatches have encouraged. Omega last January tested the waters by using Instagram to sell a 2,012-piece limited edition of its Speedmaster classic. Although priced above 5,000 Swiss francs, or $4,950, the timepieces sold out in barely four hours. “We can’t ignore it anymore. It’s a way of getting to the people we want,” said Aeschlimann. “Speedy Tuesday” had shown how closely Omega fans followed the brand online and that at least ordering over the Internet was “an avenue we can pursue further in 2017.”

The turbulence in watches contrasted with the relative calm among Baselworld’s jewelers. Most expressed satisfaction with the previous year and predicted further consolidation and brand awareness in their fragmented industry.

“Branded jewelry is catching up with non-branded,” agreed Karl-Friedrich Scheufele, co-head of family-owned Chopard. Though arguably known more today for jewelry than watches, the company only launched jewelry in 1985. “Last year, our jewelry sales grew by 20 percent, compensating largely for lower sales of watches. We continue to see more opportunities for growth in jewelry this year too,” he added.

The brand this year unveiled its new Paris est une Fête collection and revealed the U.S. would be its main focus for 2017. Roberto Coin, which celebrates its 21st anniversary this year, unveiled Sauvage and the Baraka bracelet alongside its signature animal designs.