PARIS — Turbulence in the watchmaking industry shows no signs of letting up.

Just over a year into the sector’s recovery, high-profile defections from trade fairs have laid bare challenges facing watchmakers, and prompted questions over the usefulness of such events in an increasingly digital world.

Upheaval has been most acute at Baselworld, where change has reached the highest levels of the organization, including the replacement of its managing director as well as the chief executive officer of its parent company, MCH Group. In September, the Swiss company pointed to lower earnings from the event as the main reason for a 17 percent drop in first-half profit.

Swatch group, the world’s largest watch company and Baselworld’s largest exhibitor with its namesake brand as well as Longines, Tissot, Breguet and Omega, pulled out from the event in July, saying the format was ill adapted to faster-moving and more transparent times.

For Peter Stas, a veteran industry executive who is president of Frédérique Constant Group, a label he built with his wife Aletta Stas-Bax and sold to Japan-based Citizen Watch Co., the trade fair’s struggles are a dozen years in the making.

Asked if the disagreements between brands and show organizers were simply a case of inside bickering, Stas said he sees larger issues.

“It’s frankly much more troublesome than that in my opinion. I think that the seeds of the problem were put in the ground 12, 15 years ago already,” he said.

The fair focused too much on larger brands, pushing up prices to levels that were too high for smaller ones.

“They started to decide to focus and support only the big brands — their idea was then that if we support the big brands, they will pay a lot, we’ll give them more space; actually we demand that they take bigger stands — three-story stands, bigger space, costs going up,” he said.

“But by doing this, they suppressed actually the smaller companies and I told them at the time…you are suppressing creativity that comes from the smaller brands. People come not only to see the same high street shops they see everywhere around the world, they come to Basel just to look around and discover something new,” he continued.

“They thought I was crazy. And this went on and on to the point where the big brands don’t want to pay anymore because they see that it has become very stale, there’s no excitement in it and this is very bad for the entire industry, because no brand by itself, not even a big brand, not even a group, is strong enough to support the whole industry,” he added.

The rise of the Apple watch is forcing traditional watchmakers to rethink their strategies to secure relevance with consumers; but so, too, is the growth of digital commerce. Many brands that had initially shunned online commerce as too impersonal for their high-end wares are hastily reconsidering their initial reticence, especially as they seek to tap into wealth offered by a growing class of younger consumers. The digital world also offers increasing transparency, another element disrupting traditional ways of conducting business.

“The advent of digital platforms like Chrono24 is like a giant magnifying lens, highlighting the shortcomings of many watch brands,” said Luca Solca, head luxury goods analyst with Exane BNP Paribas in a recent research note to clients.

“Middle-of-the-road distribution — retail plus wholesale plus digital — risks escalating channel conflict. Most brands don’t seem to have a clear vision on how to go about distributing their products,” he said, pointing to the tumult at Baselworld as an example.

“The piece-by-piece demise of Baselworld is a testament to that,” he added.

Movado chief executive Efraim Grinberg, for example, opted out of Baselworld last year, taking the company’s brands and licenses including Coach, Tommy Hilfiger, Juicy Couture and Lacoste, to a summit in Davos, Switzerland, days before the Basel event. The ceo had concluded that trade shows have lost relevance, and said the move would save 80 percent of the cost that would have gone to Baselworld — he planned to invest the money instead in the digital sphere.

Feeling the pressure, Baselworld organizers doubled down on their own digital efforts for this year’s edition, positioning itself as a communications platform and channeling news to its web site, an app and social media, as well as introducing a chat-bot based news channel in Facebook Messenger, Skype and Telegram called “Baselworld Live News.” 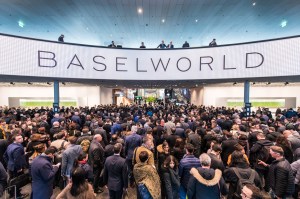 Addressing criticism over soaring prices for lodging in the city during the event, the new show director Michel Loris-Melikoff last month announced he has forged a deal with local hotels to reduce costs for visitors of the fair. Two thirds of local hotels have signed up for the deal, which sets maximum prices, requires no minimal length of stay and no requirements for additional consumption. But in a sign show organizers remain on the defensive, Baselworld last week sought to address critics with the argument that hotel prices are higher during trade shows and noting that prices had been decreased by between 10 and 30 percent.

Baselworld organizers are also bringing jewelers closer to the main hall, with a catwalk and giant LED screen for close-ups of jewelry on display. But, not immune to the changes buffeting its watchmaking counterparts, the jewelry sector is also turning to new ways of interacting with potential clients. This has resulted in a dramatic decline in exhibitors at La Biennale Paris, for example, which included only one jewelry maker this year, Lorenz Bäumer. At the same time, Christian Deydier, who used to preside over the organization of that show as head of the Syndicat National des Antiquaires, is trying to gather high jewelers together for an alternative event called Sublime but has had a hard time getting it off the ground. Initially planned for October, it is said organizers are seeking to set it up in the coming months.

Baselworld is using space previously occupied by Swatch group brands to address another criticism: the lack of food offered on the sprawling trade show floor. The next edition of the fair will include dining and meeting lounges in the center of the main exhibition hall.

Despite all the attention focused on Baselworld, however, other trade shows are also showing signs of disruption.

The Salon International de la Haute Horlogerie, known as SIHH, which is dominated by labels from Compagnie Financière Richemont including Cartier and Van Cleef & Arpels, as well as Kering brands Ulysse Nardin and Girard-Perregaux, could be seen as benefiting from Baselworld’s woes last year when Hermès quit the Basel event for the Geneva show. But just over a month ago, Audemars Piguet and Richard Mille announced they are quitting the show following the next edition in January.

Both brands cited an evolving relationship with clients as the reason, with Richard Mille emphasizing its focus on its own stores while pulling back on selling timepieces through multibrand retailers.

As watchmakers continue to seek the right mix for selling timepieces, Stas notes that the most successful retail examples come in the form of both online and physical showrooms.

“Even Amazon is opening bookshops at the moment,” he said, also citing Warby Parker, as an example. The eyewear brand pairs its online offer with a strong showroom presence.

“You have to have both, so I truly believe there is a place for Basel but they have to go back to their roots. It used to be a prototype fair; everybody was going there to put their prototypes on the table to get feedback, get some first orders and this is completely gone. They abandoned that and they have to get some of that back again,” he said.

An injection of excitement would help, he added:

“For people to come and discover what is new, instead of only having the same watches in the windows as you can see in 1,000 high streets around the world,” he said.