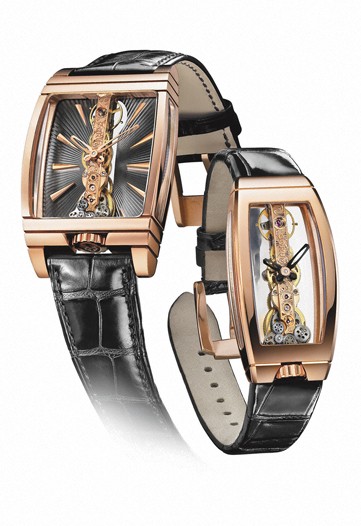 Despite tentative signs of recovery, luxury watch brands still face challenging conditions going into Baselworld, with many feeling the annual Swiss watch and jewelry fair will make or break prospects for 2010.

Baselworld director Sylvie Ritter said the watch sector’s worst crisis in 30 years had strengthened the position of the show, which starts today and runs through March 25, as many brands had cut back attendance at other trade events in a bid to trim costs.

“Market players have never staked as much on the show as this year,” she said. “Everybody is awaiting the opening of the show to be able to sweep away the last 24 months and start again on a solid basis.”

Recent results from leading players, including Swiss watchmaker Swatch Group and luxury group Compagnie Financière Richemont, indicate that sales picked up in the fourth quarter of 2009 and have continued to increase through the beginning of this year.

Swatch chief executive officer Nicolas Hayek said sales at the company, which owns brands such as Omega, Longines and Breguet, jumped 40 percent year-over-year in January and February and were even compared with 2008, a record year for the firm.

The Federation of the Swiss Watch Industry, however, has been cautious in its forecasts, predicting that foreign sales of Swiss watches will recover this year after falling 22.3 percent last year, but that any uptick would be modest and most likely would be felt in the second half.

“We are relatively confident for 2010,” said Jean-Daniel Pasche, president of the federation. “Last year was difficult, but not catastrophic. The drop has brought us back roughly to 2006 levels.”

Francesco Trapani, ceo of Bulgari, said he expected the wholesale channel to continue underperforming retail through 2010, although to a lesser degree than last year.

“The rebound should be driven in particular by the Asian market, excluding Japan,” Trapani said. “Therefore, the mood seems to be much better than it was this time last year and we are very optimistic about Basel.”

Challenging conditions are set to benefit brands with a strong heritage and purge the market of the excesses of the last five years, said Luc Perramond, ceo of La Montre Hermès.

“The recovery will not be the same for everyone,” Perramond said. “There is going to be a lot less bling-bling. I think people are saturated with overdesign and gratuitous elements.”

Brands will have to get used to an increasingly demanding customer, noted Michele Sofisti, ceo of Gucci Group Watches.

“Although there now seems to be evidence of an economic pickup, it is fair to say that what is still lacking is evidence of a sustained improvement in consumer confidence at retail,” Sofisti said. “Even when that confidence does return, we should expect [the watch sector to grow] at rates that are significantly lower than before the downturn. Consumers will be more prudent and more value-driven. Securing their loyalty will be more challenging.”

“The key stat that we found from our research was that 85 percent of the respondents told us that they will spend the same or more for their next watch purchase,” Block said. “That’s a good sign that they’re not going to come back to the market and spend less.”

Nonetheless, Vincent Perriard, ceo of TechnoMarine, predicted even high-end brands would lower their entry-level prices following the euphoria of the past decade.

“Sales of $10,000 watches have flattened noticeably in the last 12 months and will continue to suffer for the next 12 months,” he said. “Consumers today want to be able to put $2,500 on the table and get the same quality, the same finishes and the same funky features as for a $10,000 watch.”

Perriard expected attendance at Baselworld to be strong, but it was too early to talk of a recovery.

“The real recovery in the watch sector will take place when people start hiring again and that is not at all the case at present,” he pointed out.

In a bid to boost visitor numbers, Baselworld organizers have stepped up efforts to attract retailers and press, with more distributors from China and India expected to make the trip. China was one of the only markets to record growth in the second half of 2009 and many brands are banking on the Asia region, excluding Japan, to power sales this year.

“There is a lot of room to develop,” said Nicolas Beau, international director of watches at Chanel. “Having said that, I think watchmaking is a craft that is still not well understood by the public, even in developed countries.”

Corum, which opened its first boutique in Hong Kong in December, expects to open another five to 10 new points of sale in Asia this year, according to ceo Antonio Calce. “The Asian market represents 40 percent of our turnover and still offers great potential,” Calce said.

Christian Dior will open its first Chinese store dedicated exclusively to watches and jewelry at the Plaza 66 shopping mall in Shanghai in April. Laurence Nicolas, president of Christian Dior watches and fine jewelry, said the brand would be focusing more than ever on its fashion heritage.

“The deeper the brand’s roots, the more you work on them, the more you really express the DNA of the brand, the less vulnerable you are to the crisis,” she said.

Ritter noted around 40 brands have invested in larger stands at Baselworld in the hopes of making a bigger impact on buyers. These include U-Boat, which will be unveiling a 5,500-square-foot stand on the ground floor of Hall 1, having previously shown in Hall 5.1. Owner Mounir Moufarrige said the brand usually does 30 percent of its annual business at the show, but he is gambling that the new stand could boost sales, which dropped 30 percent last year on a like-for-like basis.

Other brands are maintaining their existing stands, but cutting back on the number of products they are presenting, mindful that many distributors are still sitting on piles of unsold stock.

Fawaz Gruosi, founder of Swiss jewelry and watch firm de Grisogono, said he would be showing fewer jewelry lines this year and just one new watch, the Instrumento Grande Chronograph.

“Apparently, we used to confuse people,” Gruosi said. “They didn’t know what to buy. There were too many collections. This is an opportunity to find out if this is true or not.”

Gruosi predicted that, despite the focus on heritage values in the wake of the crisis, novelties would continue to drive the market.

Meanwhile, watchmakers including Boucheron are placing the emphasis on women’s timepieces. Boucheron will be unveiling two new watches, Ma Jolie and Ava Deco, which it says herald a return of small watches with pure gold bracelets.

“There is a need for more femininity in the women’s market,” said Jean-Christophe Bédos, ceo of Boucheron. “Our latest collections have been developed to answer this new demand for more sensuality.”

Several anniversary events also are set to energize the event, including a party on Saturday to mark the 150th anniversary of Chopard. (For more on Chopard’s anniversary plans, see page 14 of this section.)

Tag Heuer is celebrating 150 years in business with a special event showcasing a sports vehicle developed with electric carmaker Tesla Motors. The car, which houses a concept watch, will be driven across the world by celebrities and influencers in conjunction with a traveling exhibit.