Disruption in the city — an important market for the industry — comes as the sector struggles to adapt to the rise of the digital channel.

A style from MVMT's new Gritty Glow collection, to be shown at Davos.

It’s been a rocky ride for the traditional watch sector, which is coping with rising competition from connected timepieces — especially the Apple watch — a fast-moving digital landscape that is upending consumption habits, and new generations of consumers who seem more interested in traveling than acquiring a badge of prestige for the wrist.

Add to that the unrest in Hong Kong, one of the sector’s most important markets. The series of street demonstrations that have swept the city since the spring have disrupted retail business — adding to the forces drawing many Chinese, top consumers for the industry, to make their luxury purchases in Mainland China.

Growth in exports of Swiss watches — a key industry measure, closely eyed for clues about the overall health of the luxury market, as well as demand for timepieces — has slowed to a rate of 2.7 percent so far this year, compared to 13.4 percent for the same January-to-July period past year, according to figures from the Federation of Swiss Watch Industry. 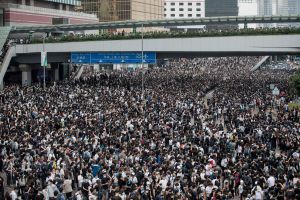 The global slowdown comes amid a slump in the Hong Kong market. The largest for Swiss watch exports, Hong Kong represents revenues of 1.7 billion Swiss francs, or $1.7 billion, so far this year, a 5.8 percent decline, a sharp contrast with last year’s 21.7 percent rise, according to federation statistics.

July watch exports showed an improvement in demand in Hong Kong compared to June, but they declined nonetheless, at a pace of 1.3 percent.

Meanwhile, the global watch market continues to show a diverging performance from pricy watches and less expensive counterparts — with business for lower-end watches most affected by competition from the Apple watch. July’s Swiss watch figures showed the sharpest monthly drop in volumes in three years — while, in value terms, a rise in sales of watches priced at more than 3,000 Swiss francs pushed the monthly export figure into positive territory.

The industry has already been grappling with a rise in digital commerce, a disruption that is prompting many labels to seek tighter control of their distribution networks and splash out on elaborate new store formats.

Audemars Piguet, for example, has given itself a three-year deadline to take distribution channels in the U.S. into its own hands. The label’s chief executive officer François-Henry Bennahmias has explained to WWD that the brand wants to be in charge in “every single sale of an Audemars Piguet watch.”

The label, along with Richard Mille, revealed last year that it would quit the annual Salon International de la Haute Horlogerie, known as SIHH, in Geneva — a high-end watch fair dominated by Compagnie Financière Richemont, owner of Cartier and Van Cleef & Arpels, among other labels.

The announced departure came a few months after Swatch Group pulled out of rival fair Baselworld, sending shock waves through the industry and prompting the resignation of the show organizer’s top executives.

The industry had been rethinking the traditional trade show formats of grouping together to attract crowds of buyers and potential clients — the speed and convenience of the Internet has changed how watchmakers reach and interact with consumers.

Richemont, for example, last year ditched its site-by-site approach for its brands. With the acquisition of Yoox Net-a-porter Group, Richemont aims to secure itself a position among actors disrupting the industry, and is handing over management of web brand flagships to YNAP.

Faced with declining participation numbers, Baselworld and SIHH organizers banded together and changed their show dates to run back-to-back, allowing attendees from abroad to grab both fairs in one trip to Switzerland. Geneva-based SIHH has moved from January to April 25 to 29, followed by Baselworld on April 30 to May 5.

Baselworld heavyweight LVMH Moët Hennessy Louis Vuitton, with labels Tag Heuer, Hublot, Zenith and Bulgari presiding over the entrance of the show, is backing organizers with plans to take part in drafting new presentation formats for 2021, but has flagged intentions to reconsider future participation at a later date.

Movado, which owns its namesake brand along with Los Angeles-based MVMT watches and fantasy timepiece label Olivia Burton, as well as licenses for Coach, Tommy Hilfiger and Lacoste, was one of the early players to make the jump from the watch fair circuit, opting instead to use the funds to host retail clients and guests at a summit in Davos. Funds saved from the move are being invested in bulking up the company’s digital channels.

Longines, a Swatch Group label, has been focusing on introducing watch models market-by-market, at different times of the year, in contrast to the Baselworld days when different models would be shown at once.

Meanwhile, Baselworld has been reinforcing ties with the jewelry sector, and last month became a member of the international jewelry confederation CIBJO, which counts national trade organizations from 45 countries, with an eye to serve as a business platform for the industry.