The Salon International de la Haute Horlogerie, one of the world's two premier watch shows, was always going to be a light and shadows story this year. 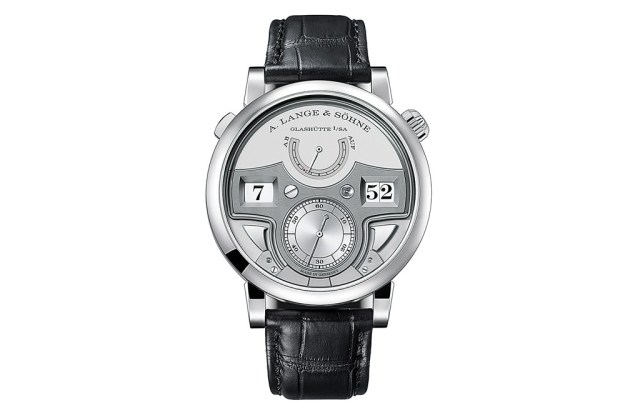 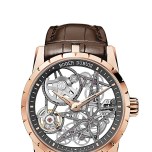 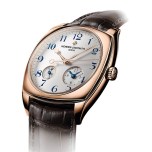 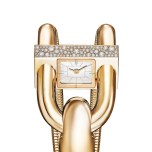 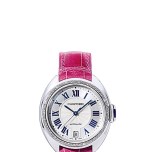 GENEVA — The Salon International de la Haute Horlogerie, one of the world’s two premier watch shows alongside Baselworld in March, was always going to be a light and shadows story this year. Swiss watch exports climbed 2.3 percent to 20.4 billion Swiss francs, or $22.44 billion at average exchange, in the first 11 months of 2014 — not bad after a string of annual records. And key markets have advanced, notably the U.S.

But China’s increasingly important watch market is shrouded in uncertainty as its economy slows and the government cracks down on gift-giving; Hong Kong, Swiss watchmakers’ single biggest market, remains opaque, and Russia and parts of the Middle East are swathed in geopolitical worries. Even closer to home, much of Europe is near stagnant amid political differences over economic austerity.

If all that weren’t enough, four days before the show, the Swiss National Bank dropped a bombshell with its decision to end a three-year informal currency peg against the euro, sending the Swiss franc — a traditional haven — rocketing, and Swiss watchmakers scratching their heads over what to do.

With 14,500 dealers, reporters and other attendees all looking for answers, it took Compagnie Financière Richemont SA, the driving force behind the SIHH, some time before indicating prices for its watch and jewelry brands like Cartier and Piaget would rise by 5 to 7 percent in euros. Separately, archrival Swatch Group, Baselworld’s main exhibitor, said prices would increase by about the same, and possibly up to 10 percent, though it would be more cautious for entry-level brands.

The storming franc, which has settled around 15 to 20 percent up against the euro since the bank move, has come at a particularly delicate time for Swiss watchmakers. The industry is in the throes of sustained heavy investment to meet projected demand and respond to expected shortages of key components sourced from third parties. Many are spending heavily on “internalizing” production of specialties like dials, cases, bracelets or even entire movements previously sourced elsewhere. Vacheron Constantin, one of Richemont’s premium watch brands, in August will open a big expansion to its Geneva base. The expansion at Piaget, another premium Richemont label, will be finished about a year later. Just before the show, privately owned Patek Philippe said it would spend 450 million Swiss francs, or $513 million at current exchange, on its Geneva site.

Watchmakers’ decision not to pass on the full impact of the franc’s rise to euro-zone dealers reflected a choice to accept lower margins rather than endangering long-term market growth and relations with retailers. Transferring the full impact would have hit sales in big euro-zone markets. Doing nothing, by contrast, would have encouraged parallel, or “gray market,” imports into Switzerland, as euro-priced watches undercut identical products at home.

Not surprisingly, currencies overshadowed everything at the show, including discussion of Apple’s smartwatch, which had been expected to be a big topic but was barely mentioned. The foremost topic was when the price increases would bite: some brands said they would act immediately; others suggested waiting until February or even March to let euro-zone dealers clear existing stocks and, just possibly, benefit from a potential brief sales boom as buyers locked in pre-rise prices.

“For the moment, we’ll do nothing,” said Jean-Marc Jacot, chief executive officer of independently owned Parmigiani. He justified sharing the pain of squeezed margins with dealers, noting that Parmigiani’s Swiss dealers still enjoyed 50 percent margins, compared with the 40 percent that applied to certain other brands.

“Often the best thing to do is nothing and let time pass. This is not a crisis, it’s a currency adjustment,” agreed Juan Carlos Torres, Vacheron Constantin’s veteran ceo. Torres used SIHH to launch the limited-edition Harmony collection, celebrating its 260th anniversary, with prices from $43,800 for a dual-time watch to $314,600 for a tourbillon chronograph.

Another big talking point was how sensitive customers would be to the price increases. All agreed flexibility was the least in the low- to midprice bracket. Opinion differed about how wealthier customers would react. “It’s very difficult at the moment to estimate the consequences. Will fewer rich Chinese visit Switzerland? Will more people buy in Paris or Frankfurt? To be quite honest, I have no idea,” admitted Jean-Marc Pontroué, ceo of Richemont’s exclusive Roger Dubuis brand.

With models often selling for hundreds of thousands of Swiss francs, he suggested Roger Dubuis’ customers would not be too price-sensitive, provided the product was right. By contrast, Stephen Forsey, cofounder of even more upmarket Greubel Forsey, was cautious. Unveiling a new “entry-level” watch at 290,000 Swiss francs, or $330,600, (compared with the brand’s previously cheapest 320,000 Swiss francs, or $364,800) Forsey noted: “We’re trying to bring to collectors something they can’t resist. But we also have to offer value. They all know how to count.”

Executives noted Switzerland had withstood shocks before and that, reassuringly, all were in the same boat. Even Wilhelm Schmid, ceo of Richemont’s A. Lange & Söhne brand, which is unusual in being made in Germany, not Switzerland, expected some currency impact, as some of his components were Switzerland-sourced. Giving form to the faith that recently prompted Lange to also invest in new facilities, Schmid unveiled the Zeitwerk Minute Repeater, an unusual watch combining traditional hands with a mechanical digital display and costing 440,000 euros, or $501,600. “We wouldn’t do it if we weren’t confident about our future,” he said.

“Switzerland, as usual, will cope. We have very high productivity, a very qualified and very flexible workforce, a liberal economy and a track record of overcoming adversity,” reckoned Georges Kern, ceo of Richemont’s fast-growing IWC subsidiary. He, like others, noted the euro’s latest slump against the franc continued a progressive decline. “We went from 1.60 Swiss francs to 1.20 Swiss francs to the euro and we adjusted. Whatever the problem, it’s always overcome if you have appropriate products,” added Philippe Léopold-Metzger, Piaget’s ceo.

Many stressed the fundamental trend of a steadily wealthier clientele throughout the world would continue to support watch demand. “Medium- and long-term, we remain very positive,” said Nicolas Bos, ceo of Richemont’s Van Cleef & Arpels high jewelry and watch marque.

“The market will not grow that much in 2015. It will be stable and may even decline, so market share will be the battle ground,” warned François-Henry Bennahmias, ceo of independently owned Audemars Piguet, one of many executives to note the stronger franc would inevitably force renewed attention to costs.

But Bennahmias was confident demand would remain robust as long as the product was right. “If you take all the top brands — roughly those priced above Rolex, Omega and Breitling — total sales were probably no more than 600,000 to 700,000 pieces last year. So there are still a huge number of potential buyers out there. If you do the job right, it remains a very untapped market,” he reckoned.

The new models unveiled confirmed the greater sobriety, with more women’s watches and more jewelry products, which also were identified as trends at last year’s show. Cartier, Richemont’s powerhouse watch and jewelry brand, unveiled more than 100 new items, notably the Clé de Cartier women’s watch collection. Stressing simplicity, the range, distinctive for its novel shape and a new automatic movement, comes in two sizes and finishes, including yellow gold on a leather strap costing 13,500 euros, or $15,120, and a baguette diamond-studded model costing more than 850,000 euros, or $952,000. “In the next year and more than ever, creativity will be key,” predicted Pierre Rainero, Cartier International’s director of image, heritage and style.

IWC devoted space to the new midsize versions of its Portofino range, launched in the fall. With diamonds on the bezel, a moon face and automatic movement, the collection marked an important diversification toward the women’s market for a brand best known for technical, masculine products. In fact, half of sales in Asia, where the line was launched, have been to men, underlining Kern’s comment that the product had enjoyed a “brilliant” start. He hinted IWC could develop more products for women — including, perhaps, a version of its top-selling Portuguese range, celebrating its 75th anniversary this year.

Ralph Lauren also launched a predominantly women’s collection with the Tuxedo range, coming in two sizes. Highlighting another trend, the brand showed an Art Deco-inspired diamond-studded choker on a black suede strap designed to complement the diamond version of the Tuxedo. That growing interplay between watches and jewelry was also evident at Audemars Piguet, which spotlighted its innovative streak with its “Diamond Punk” high-jewelry watch. Priced at $879,200, the diamond-encrusted piece, said to be inspired by the craggy landscape of the brand’s surroundings, takes nine months to produce. “It’s a statement. We wanted to show we break rules,” Bennahmias said.

Van Cleef & Arpels launched the Cadenas range, reviving a creation dating back to 1935, with a collection priced from 18,000 euros, or $20,160, for a simple gold watch to 130,000 euros, or $145,600, for a fully jeweled version. “Ladies’ watches remain a strong growth sector. It was underdeveloped and there’s still a lot of potential,” predicted Bos. “But it was particularly important for us to come up with an element of surprise and emphasize the traditions of a jewelry house integrating watch functions into a piece of jewelry.”

“The ladies market shows great potential, and jewelry will continue to outgrow watches,” confirmed Piaget’s Léopold-Metzger. While using SIHH to unveil variations of its ultrathin Altiplano range, including a $27,500 model with a first-time gold bracelet, rather than a conventional strap, he confirmed the brand would push further into jewelry. Two new collections are due this year, following the two launched in 2014, including further pieces playing on Piaget’s established “Rose” theme.

For men, there was ever more emphasis on stripped-down “skeleton” models, exposing their mechanics and, in the most extreme cases, akin to mini sculptures. Roger Dubuis, a skeleton specialist, unveiled innovations including a cheaper addition to its Excalibur range, which, with an automatic movement but no tourbillon, will sell from a relatively modest 54,000 Swiss francs, or $84,040. Women also should expect more skeletons: among others, Parmigiani showcased its Tonda 1950 Skeleton, a big, rose gold model with diamonds priced from $42,500, which ceo Jacot modestly called “the most beautiful technical watch available for women.”