WWD Basel: Fun at the Fair 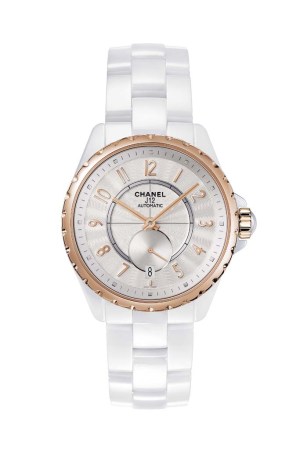 This story first appeared in the March 27, 2014 issue of WWD. Subscribe Today.

The new timepieces take the pillar line in a more feminine direction, with slenderized horns, a slimmed down case and a softer version of the bracelet featuring pyramid-shaped links. Whereas the Dior VIII came in two sizes — 33 mm. and 38 mm. — the Dior VIII Montaigne is available in 25 mm., 32 mm. and 36 mm.

Laurence Nicolas, president of Christian Dior watches and fine jewelry, noted it was a departure from the sporty black ceramic models that made up the core of the Dior VIII collection.

“Steel is essentially a way for us to talk about the Dior gray,” she said. “No doubt, it will also allow us to attract customers looking for something more understated, particularly with the 25-mm. watch. It has a very timeless feel, a refined but discreet elegance, especially with the alligator strap, which is also a novelty for us this year.”

The collection consists of 20 references ranging from stainless steel quartz watches to a limited-edition Grand Bal automatic timepiece featuring a pink gold oscillating weight on the dial decorated with mother-of-pearl marquetry and set with diamonds.

The ad campaign, shot by Patrick Demarchelier, will break on June 20.

Chanel hopes the new version of its cult J12 watch is the kind women won’t want to take off.

It has dubbed the timepiece J12-365 to reflect its appeal as a more feminine spin on the sporty black and white timepieces launched in 2000, which have been credited with popularizing the use of ceramic in watch manufacturing.

Nicolas Beau, international director of watches at Chanel, said the case has been made slimmer and slightly smaller, with a diameter — coincidentally — of 36.5 mm., compared with 38 mm. to 42 mm. for the previous versions.

“Originally, the J12 was a unisex and rather sporty watch,” he noted. “We wanted to create a totally feminine version.”

The watch has been stripped of its rotating bezel, giving the dial a fresh feel, accentuated by guilloché finishing and a running seconds subdial at six o’clock. Diamond settings are now placed inside the case, instead of on the bezel.

“Opening up the dial makes the watch feel quite big. It is 36.5-mm. wide, but the visual perception is almost identical to a 38 mm.,” Beau said. “That remains an important element of the J12, which has always had a strong presence, both visually and on the wrist. Only now, you have the comfort of a small watch.”

The watches come in black or white ceramic with accents of stainless steel or beige gold, a new alloy exclusive to Chanel.

NEXT: Emporio Armani Swiss Made >>

Emporio Armani is taking its watches upscale with the launch of Emporio Armani Swiss Made. The 51-piece range, which goes on limited release today, will be officially unveiled in Basel and start shipping globally in July.

Giorgio Armani said the timepieces, inspired by the Thirties and Forties, were “not overly precious” and designed for everyday use.

“Designer watches are usually just beautiful objects. I strive instead for something more,” the designer said. “I have created a new watch collection for Emporio Armani that while being elegant, streamlined and subtle, is also wonderfully functional.

“I wanted to create the most precise watches — when it comes to technology and manufacturing — and to match this precision with the most precise design, which is where my expertise comes in,” he added.

“Throughout his career, he has melded old-world craftsmanship with modern technology to create indelible images in the fashion and design industries. The creative process for this collection was fascinating,” Kartsotis said.

The launch is part of a broader move by Fossil to bring Swiss technology to its fashion brands, specifically by increasing its production capacities for watch movements and cases in Switzerland, with an eye to catering to Asian demand in particular, said Luis Samaniego, senior vice president of luxury brands at Fossil.

NEXT: Baselworld at a Glance >>

BASELWORLD AT A GLANCE

Baselworld Village, 14 Binningerstrasse: With its restaurants and bars, Baselworld Village is an evening  meeting place for show visitors in the heart of the city.
Open March 27 to April 2, 6 p.m. to 2 a.m.