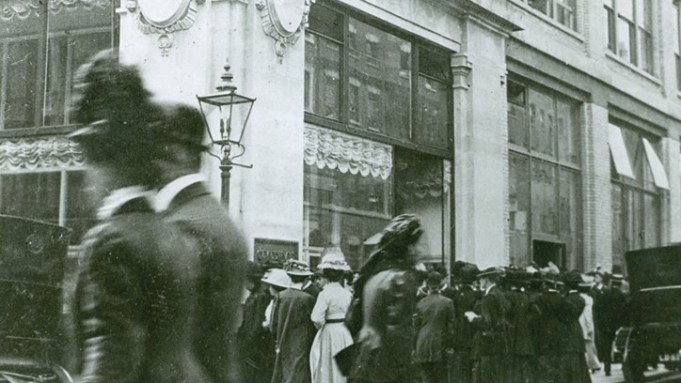 As Eugene Schueller laid the foundation of what would one day be a global beauty conglomerate, the world around him was on the cusp of radical change.

While a January 31, 1909, New York Times article carried the title “Feminine Mind Perplexed by the Question Whether Style in Gowns or Beauty Lends Most Distinction,” for instance, Emmeline Pankhurst and her following of suffragettes were making inroads into winning women’s right to vote. The National Association for the Advancement of Colored People was founded in New York in the same year.

The world was also growing and shrinking. Borders expanded, thanks to Ernest Shackleton’s unsuccessful attempt to reach the South Pole in January and Robert Peary claiming to have reached the North Pole in April (a declaration later disputed). Meanwhile, Louis Blériot became the first man to fly across the English Channel. Alice Huyler Ramsey made a splash by being the fi rst woman to drive across the U.S., and construction began on the Titanic.

Advances also were being made in science and technology. Søren Peter Lauritz Sørensen introduced the pH scale measuring alkalinity and acidity, and Guglielmo Marconi and Karl Ferdinand Braun were awarded the Nobel Prize for physics for their work on wireless telegraphy. In addition, Sweden’s Selma Ottilia Lovisa Lagerlöf won the Nobel Prize for literature, the first woman to do so.

And firsts in culture didn’t stop there. Serge Diaghilev began the Ballets Russes as a means to create a platform for Russian dance in the West, and London’s Victoria and Albert Museum’s Aston Webb building was opened. Singer Carmen Miranda and actors Errol Flynn and Douglas Fairbanks Jr. were born, the term “Cubism” was coined and Condé Nast took over Vogue magazine, all in 1909.

While Abraham Lincoln was making his debut on the U.S. penny, a flurry of retail activity was under way, including the opening of London’s Selfridges department store, Boston’s Filene’s Basement and Chicago-based Walgreens’ second drugstore.

Much like today, women agonized over how to maintain and improve their looks. An article from The New York Times dated January 10, 1909, entitled “A Message of Interest to All Women,” warned of the need to protect skin from the rigors of winter weather, for instance.

“One of the simple formulas used for many generations returns to favor every once in a while,” the article said. “It is made up of mutton tallow and lemon juice or glycerine. The best tallow is gotten from a reliable butcher, [dried] out on the stove, melted and mixed up with glycerine. When it cools, it is put aside in little jars or tin boxes and used every night through the winter.”