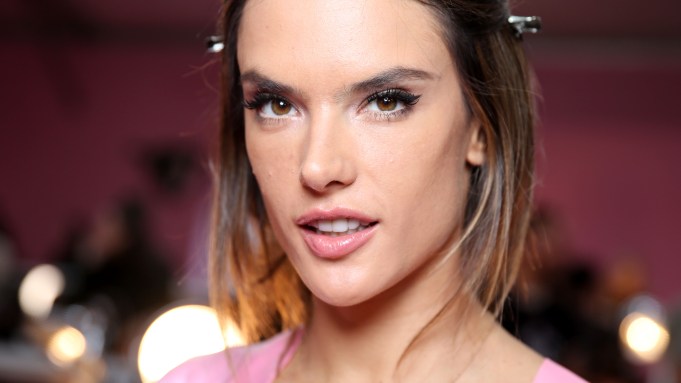 PARIS — “I wanted them to be my angel, too,” makeup artist Tom Pecheux said backstage prior to the 2016 Victoria’s Secret fashion show in Paris on Wednesday. So he crafted models’ eyelids with a winged flourish.

Pecheux gave a nod to America, where the brand originated, and to France, home of its show this year.

“So it’s very natural glowy skin — healthy, like the natural Parisian, the chic Parisian. But it’s also the glam of America,” he explained. “That’s where glamour started, with Hollywood and all the celebrities.”

Working with Max Factor products was in keeping with this. “He was the makeup artist of all the big stars, starting with Marilyn Monroe and Greta Garbo,” Pecheux said. “So I wanted to bring a little bit of glam to the face.”

Most of the models are set to have the same look, save for a few with no mascara, white eyeliner and a slightly longer wing.

Hairstylist Anthony Turner set out to put a new spin on the Victoria’s Secret woman. “It’s almost like [she] had a really fun night out,” he said.

“This is the day after the night before. I always love that — whatever I do, I try to put a touch of that kind of sexiness into it,” Turner continued. “I find that hair very sexy, when it’s a little bit lived in. It’s a bit worn in and doesn’t appear as glamorous, doesn’t feel as va va voom. It feels a little bit more disheveled, very kind of now, a little bit rock ‘n’ roll. There’s that touch of rebelliousness to it, which I always enjoy doing.”

He employed the Beachwaver tong to get a wavy effect, which he described as feeling “a little bit broken and very piece-y,” which is attained by alternating the direction of the curling iron. “It’s sexy and gorgeous,” he said.