Gender inclusivity has become a big part of the LGBTQ beauty story.

Fluide's latest campaign is meant to show gender as a constellation — a 3-D concept, versus a 2-D spectrum.

When Nikita Dragun, a trans woman, started her beauty influencer career a few years ago, she felt like sometimes the inclusivity conversation was forced.

“I was given, a couple of times, opportunities that sometimes I felt were just to check off the box, to have an inclusive LGBTQ campaign,” Dragun said.

Things have progressed today she noted, but they’re far from perfect. When she went to launch her own beauty brand, Dragun Beauty, trouble brewed before products were even available. 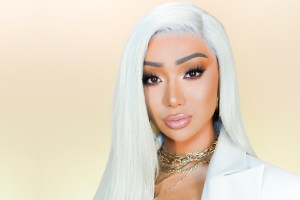 “Initially the reaction was very, very tough for my brand,” Dragun said. “It was, ‘Nikita Dragun’s brand fails before it even comes out.’ You had drama videos, and we had articles circulating around and comments — it was very surprising.”

Beyond confusion over the brand proposition, people on the Internet seemed hesitant to accept Dragun as a businesswoman.

“Everyone [was] like, ‘oh, you must have investors or someone who’s orchestrating or a sugar daddy in Dubai somewhere who is doing this,'” she said. “It’s an awful stigma that not only women have, but trans women in general, that have never been seen in this light.”

With more product education, users are starting to come around to the Dragun Beauty proposition, she said. And there are more launches on the way for the brand, which holds transformation and inclusivity at its core.

But Dragun is not the only one pushing the industry forward when it comes to meeting the needs of LGBTQ consumers — other brands, including Non Gender Specific and Fluide, are aiming to bring products to market that can be used by anyone, anywhere on the gender spectrum. 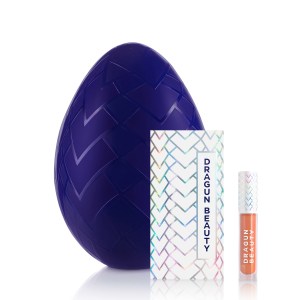 Nikita Dragun’s first two products are sold in an egg.

For her beauty line, Dragun pulled from her own experiences as a trans woman. Right now, the Dragun Egg Transformation Kit comes with two products, a color corrector and a powder.

Dragun said she used her own experiences applying makeup and seeking to feminize her face in the product development process. First, there’s a color corrector, which looks orange but can be used on any type of dark spot, she said. “It’s kind of like the primer to the primer.”

“For me, in my transition, I have difficulties with my five o’clock shadow girl — because I have a beard kind of thing growing — I have it lasered, but I have a little pigmentation,” Dragun said.

Then, there’s a brightening powder. “I learned through my transition that the way the light hits the face is what ultimately is the biggest key in order to feminize the face and soften it and have it look more beautiful,” Dragun said.

Future products are likely to be centered around the idea of transformation, she said. Dragun Beauty ships worldwide, and for Pride, is donating one egg to the Los Angeles LGBT Center for every egg that is purchased.

When Dragun launched, her first egg drop wasn’t to influencer friends or celebrities, it was actually to the LGBT center, she said.

“My perfect vision of the brand is to cater to what I would have wanted to give myself three years ago when I was unaware of the glam world,” Dragun said. “I do want, in a sense, to stay in the vein of transformation.”

When Andrew Glass launched Non Gender Specific in late 2017, he hadn’t seen anything else like it on the market. 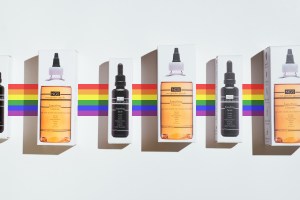 “I am a gay man, so equality has always been a big part of my life. At the time when I was starting to develop the concept, I didn’t know if the market was ready for a brand like this,” Glass said. He launched online, but now his line of natural, gender-neutral beauty products are carried at mainstream retailers like Credo and Nordstrom.

Product names are intentionally straightforward — Everything Serum, Everything Cleanser and Flooid, a gender-neutral fragrance — comprise the brand’s assortment. The line is also meant to be multifunctional.

Before Glass started the business, he’d been working at a men’s brand called EvolutionMan skin care, and before that, as a product development manager for Astral brands. He started to notice a polarization in the beauty sphere — men’s brands were going for a “manly man” vibe, while heritage brands seemed to declare gender neutrality, yet feature all women in the advertising.

“Our slogan is the brand for all humans,” Glass said. “We do focus a lot on social on talking about inclusivity and gender fluidity…people think gender-neutral, that it’s only for men or women, but we welcome and recognize all gender identities, not just male and female.”

At retail, merchants at first were not sure what to do with something like Non Gender Specific, Glass said. “When we first came out, buyers were really confused about where to put us in store. We ended up just being placed with other natural brands, which worked. It was a mental turn they had to take to see it as is.”

But, for some, it does help to talk to a different type of shopper. “They can get a much wider audience and more consumers if the products are less focusing on having a face,” Glass noted.

To that end, Non Gender Specific does not use any people in its promotional materials, preferring instead to focus on products and ingredients. “We don’t want anybody to feel like they don’t identify with us,” Glass said. 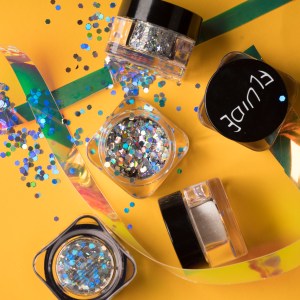 Fluide’s makeup products are meant for anyone, anywhere on the gender spectrum.

At Fluide, gender inclusivity is boldly at the center of the story. The brand’s latest campaign images feature models with colorful makeup and hair glitter — they’re modeling products, but they’re also depicting “gender as a constellation,” according to Fluide cofounder Isabella Giancarlo.

“There’s no two ways that you can connect the stars,” Giancarlo said. “I love the idea of gender as a spectrum, but I wanted to move into a 3-D space.”

Giancarlo and Laura Kraber started the brand after Kraber started noticing how Gen Z’s belief system varied from that of other generations. “Kids today are really moving forward, advancing our understanding of gender identity and sexual orientation and self-expression,” Kraber said.

They also happen to be super into makeup, particularly when it comes to self-expression. Fluide makes cruelty and paraben-free makeup and nail polish products, as well as glitter.

“Right off the bat we had a huge influx of people telling us about how seen they felt by having a brand like that take a hard stance on inclusion and gender identity and the gender-expression category. As a queer person, I always kind of roll my eyes when June comes around because everyone has their rainbow edition tote bag or a cast of a couple of LGBTQ people wearing a company’s product, and I’m like, ‘where are the queer people for the rest of the year?'” Giancarlo said.

“When we started we had people who inspired us. We had a first set of models who we worked with, but it’s really been a community that’s grown up around us,” Kraber said. “There was a big gap in the market. If you’re interested in the intersection of queer culture and beauty, you will find us.”

Right now, the brand is sold mostly on its own web site, but is also sold at The Phluid Project in New York.

Fluide aims for a non-prescriptive approach to beauty. “Makeup can be a really tricky thing for a lot of members of the LGBTQ community, whether you felt like you had to wear it or you couldn’t wear it or you couldn’t wear makeup in the way that felt good to you,” Giancarlo said. “We wanted to be this haven that said, ‘Hey, throw all that baggage away, and come to makeup with this clean slate where you can make up your own rules and make up your own self-expression in a way that feels good to you.'”