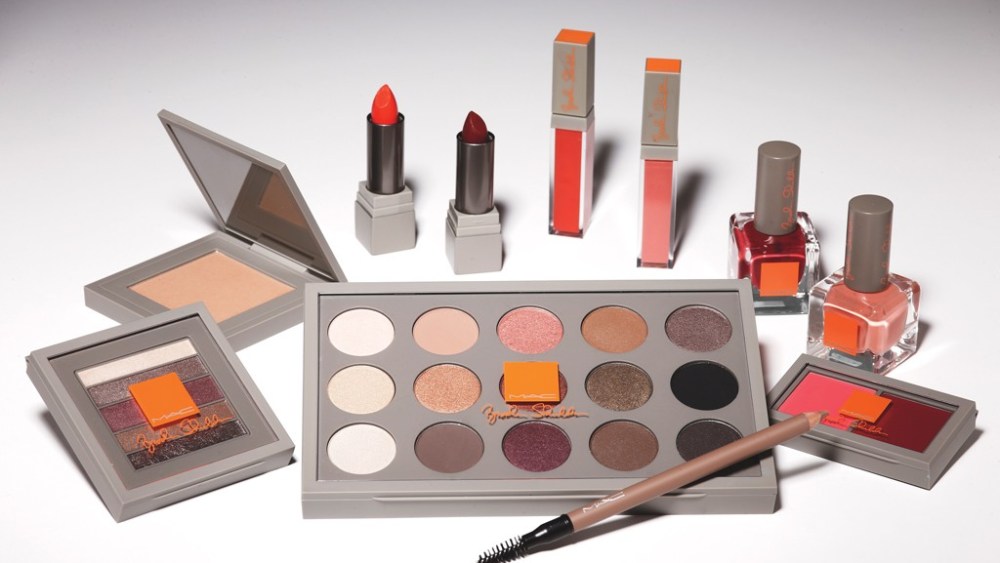 She’s been in show business since before she could crawl and no stranger to controversy (remember, nothing came between her and her Calvins at the age of 15), but don’t make the mistake of pigeonholing Brooke Shields.

The Princeton-educated model, actress and author is about to add another skill to her wheelhouse: makeup creator, in collaboration with MAC Cosmetics.

“There’s this little place I go to get coffee after I drop my kids [daughters Rowan, 11, and Grier, 8] off for school and after a yoga or spin class, where I think no one will see me without makeup,” she said with a laugh. “Of course, who do I run into but James [Gager, MAC’s senior vice president and creative director], Mr. MAC? After we talked a few times, he approached me about the next Icon line and asked if I would consider designing it with them.”

And Shields couldn’t wait to dive in. “I’m a perpetual student — I treat everything like homework,” she said. “The minute [James] planted the seed, I went to work on my [inspiration] book. I was smearing lipsticks and making smudges of products, tearing out ideas. I brought it to the first meeting, and the surprising thing is that they cared,” she said with a self-deprecating smile. “I was like, ‘You’re punking me.’ They were treating me as an equal, and it encouraged me to have my vision. I’m very accustomed to taking other people’s ideas and just making them work, because that’s what you do as an actor. Or being told to ‘wear this’ or ‘show this’ as a model. So it’s always about someone else’s needs that take precedence over what is natural to me. Even when I changed my mind, we found a through line.”

Next, Shields took a hard look at the products she already owned. “I went through all of my makeup, opened it all up, looked at it all and started to decide what of each product I loved — whether it was from MAC or some obscure brand I got on a shoot in Japan. I’ve always paid close attention on shoots — I love learning new techniques, and there’s always some trick you learn. I’m so used to having my makeup done by someone else — this was really my first time to delve in personally, rather than it being a mask that’s put on for a certain photo shoot. And so many times you get asked to ‘create’ something, but it ends up being ‘put your face on this.’ I got to run with this, and I loved every detail of it. I loved being a part of the process and having my taste incorporated into it. It’s not a frivolous process. There is real attention paid to quality and I’ve been spoiled by the people I got to work with and the freedom I was able to have. That invests you [in the project.]”

Click Here for a Slideshow of Brooke Shields Through the Years >>

Shields was so inspired that she created two cosmetics concepts. “One was this really fresh-faced, cleaner, daytime look and the other was much more vampy with a big focus on the eyes, and I’m both of these things,” she explained. “I like the natural part of myself, and I like the sexier side, too. James asked me what I liked best, and I just could not make up my mind between these two very diverse looks. So I thought, ‘Maybe they’ll like one better, or say this is the one for the market.’ It was like trying to pick a wedding dress.”

Instead, Gager and Jennifer Balbier, senior vice president of global product development, artistry brands for the Estée Lauder Cos. Inc., decided to move forward with both lines, which will make their debut in October. “We got into this conversation, and every woman we know, even if they have a predominant style, definitely has two sides,” said Shields. “So we decided to highlight the richness of both of those.”

It’s the largest Icon collection to date, Gager said, at 15 stockkeeping units which range in price from $17 to $85. The centerpiece is a 16-shade eye-shadow palette, the first time the brand has done a celebrity palette so large, Gager noted. The $85 offering includes shades ranging from Pretty, a soft golden peach beige, to Carbone, a matte black shade. She was adamant that the palette contain not only a range of finishes — from satin and frost to Veluxe pearl and shimmer — but a full complement of shades. “In every palette I’ve ever bought, there always seems to be something missing — like a highlighter or a crease color,” she said. “I always have to get a second one. So I wanted to make sure we got it all in one with this. The ability to vacillate between different parts of my personality — and a woman’s strengths in each — was important. Once women start having children, they seem to be lumped into this mom category, but some of the sexiest women I know have had children. I think beauty is seen in confidence — the confidence to be whatever they want to at that time.”

And how could the woman with arguably the best-known eyebrows of all time not have a brow product? Shields has that covered with Veluxe Brow Liner in a midtone muted gray, $20, and a brow set with clear gel, $17. Two Veluxe Pearl Fusion Shadows, $44 each, will be offered, as will a Cremeblend Blush Duo, $31; two shades of lipstick, $22 each; a bronzer, $27.50; two Lipglasses, each $22; two shades of nail lacquer, each $17, and Optimum Black Opulash mascara, $17.

The gray packaging with orange accents — a departure from the brand’s stark black compacts — was modeled after a recent redecorating project in the actress’ home in New York’s West Village. And the names? “I kept coming up with names and lists. I’d sit and have sessions with myself. Then, once you run through sort of your children’s names and your dogs’ names and your towns, it’s like ‘Now that I’ve got that out of my system, I can be creative.’” She passed on naming any of the shades after her daughters. “It felt a little too precious [to do that],” she said. However, the dog made the cut with Pepper, a dark charcoal eye shadow.

“Brooke resonates globally, and she keeps reinventing herself,” said Gager. “She’s an ageless beauty. She’s also a mom, an actress, a model with everything happening all at once, like most modern women.” Balbier agreed: “She’s the consummate all-American girl and a great role model.”

The collection will enter North American MAC stores on Oct. 2 and will be in international doors, in 76 countries, later that month.

Inez van Lamsweerde and Vinoodh Matadin shot the in-store visual. “I’ve done shoots for shows I’ve done in the past, but shooting this beauty look was like being back in the olden days,” she said, referencing her long and successful modeling career. “It was fabulous. It was the first time in nearly 50 years of modeling where I’d ever been on a photo shoot where they’d hired a ballet dancer. He was a friend of Inez and Vinoodh — and he danced behind them and acted out what I should do.” She leaped to her feet and demonstrated. “I almost died [laughing.] He was from the German ballet, and like 8-feet tall, just doin’ it. It was absolutely hysterical.”

While all involved declined to discuss sales projections, industry sources estimated that the limited-edition collection could do $5 million at retail in its time on counter.

Shields is currently writing another book, her sixth. Like 2005’s “Down Came the Rain,” it’s a still-to-be-titled memoir, expected from Dutton in November. “It’s not an autobiography — I figure I can do that in a couple of decades, I have a couple more rounds in me,” she said. “It’s a story about my mother and our relationship. I found it a topic fraught and wonderful to delve into.” Shields’ legendarily business-minded mother, Teri Shields, died in 2012. Shields also revealed that she and her husband, Chris Henchy, are developing a TV show, although she kept mum on further details.

Clad in Rag & Bone boots, Barbara Bui jeans and an orange Hugo Boss top as she spoke exclusively to WWD at MAC’s offices, Shields noted that her daughters were glad she “finally got some cool-mom clothes.”

“My daughter [Rowan] was, like ‘Two things. Mom, please wear makeup.’ She gets so mad at me if I take her to school without makeup. She’s like, ‘Mom, you really need to wear makeup.’ My response? ‘Well, I’m not working. I don’t really have to wear makeup.’ And she is like, ‘Um, you do.’ And I’m like, ‘How old are you?’ And if I wear funky boots, she looks at me and says, ‘Well, all right!’ She’s a tough critic. She came out of the womb that way.”