As designers were putting the finishing touches on their fall collections this week, work was just beginning on another front: figuring out the beauty looks. While makeup artists are famous for being quick-change artists, fashion week forces that... 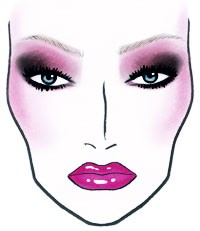 As designers were putting the finishing touches on their fall collections this week, work was just beginning on another front: figuring out the beauty looks. While makeup artists are famous for being quick-change artists, fashion week forces that ability to a whole new level — beauty tests, when hair and makeup looks are presented to a designer, nearly always take place just days before models march down the catwalk.

While it’s safe in any season to bet that you’ll see red lips, lip gloss and plenty of black mascara, there’s a real movement toward color on other parts of the face — a bold eye shadow, a flush of blush, a shimmery eyeliner. But don’t expect the clown-like looks this time around.

“The looks coming up are very easy to translate into ‘street’ makeup, something an actual consumer would wear,” said Gordon Espinet, executive director of makeup artistry for MAC Cosmetics. The company, a backstage powerhouse, will do upward of 40 shows — including Zac Posen, Catherine Malandrino, Oscar de la Renta and Carolina Herrera — in New York alone this season.

“You see brights like violet, pink and peach, but they are sheer and wearable, and worn with earthier colors,” Espinet continued. “Inspiration is coming from all eras, from the Fifties to the early Eighties. And there’s a movement toward playing up your makeup — not to mention using multiple products like a few eye shadows, eyeliner, multiple shades of blush. It’s about letting your inner child out.”

Here, just a few of the looks that were planned: