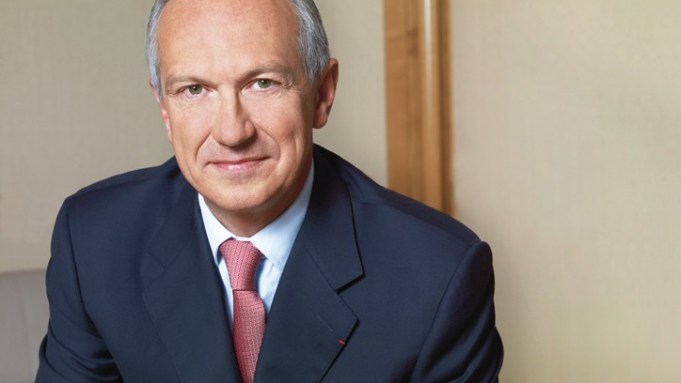 As an avid sailor, Jean-Paul Agon has learned from weathering past storms to keep an eye trained on the horizon.

But even as the recession holds its grip and archrival Procter & Gamble continues to challenge L’Oréal’s dominance, the company that helped define the modern beauty era is about to celebrate its centenary. Its 52-year-old ceo, though, is thinking ahead to the next 100 years and what it will take to sustain L’Oréal’s preeminent leadership position.

“We must prepare for what we will become after the end of the crisis, because the crisis won’t last forever,” he says, during a wide-ranging interview in his 10th-floor office in the Paris suburb of Clichy. “The big question is, what should we do in order to get out of the crisis even stronger than when we came in?”

Not only have L’Oréal’s fortunes changed in a relatively short period, but so has the industry around it. “Two years ago, the growth of the cosmetics market worldwide was at a peak, at plus-5 percent,” he says. “Now the business environment has changed completely.”

While declining to give a projection for L’Oréal, Agon ventures an opinion that the cosmetics market “as a whole will stay slightly positive worldwide this year, which would be something good.”

The question of L’Oréal’s position has become an issue of more than academic interest. Press reports have surfaced, quoting data from Euromonitor International, saying P&G has moved ahead of L’Oréal into the number-one position as the world’s largest beauty company. But once the figures are calculated to exclude product categories not traditionally counted as a classic definition of beauty — oral hygiene, bar soap, liquid soap and male and female razors — then L’Oréal remains on top globally, according to Euromonitor data. The consumer tracking firm certifi ed L’Oréal’s 2008 global ranking, with the exclusion of the four personal care categories. For 2008, the study shows L’Oréal with a 12.7 percent global share and P&G ranking second, with 9.4.

In addition, the NPD/IRI Cross Channel Monitor rates L’Oréal number one among corporations across both the prestige and mass channels in the U.S. for calendar-year 2008.

Looking ahead, Agon says he has identified the vital, core elements that drive the L’Oréal model, but there are other dynamics that need to be changed “to reinvent the company.”

His list of fundamental drivers are: L’Oréal’s focus on beauty; its quest for innovation and quality dating back to the founding days of Eugène Schueller; its international roster of brands and all-encompassing global reach; the company’s debt-free financial muscle, and, finally, its multichannel, multilayered worldwide distribution network.

Under the heading of what needs to change, Agon first zeroes in on product innovation. “We have to move more towards what I call ‘accessible innovation,’” he says, “targeting a very broad customer base.”

To that end, Laurent Attal, who has been president and ceo of L’Oréal USA for the last four years, is transferring back to Paris as executive vice president  and managing director of research and innovation. He will succeed L’Oréal’s retiring R&D chief, Jean-François Grollier. In addition to spearheading R&D, Attal will oversee the year-old innovation department.

“R&D is more than ever a priority,” Agon says. “We believe in quality, we believe in innovation, and the only way to have an advantage in terms of innovation and quality is to have better R&D. That’s why we have the biggest R&D in the world, the highest ratio in terms of investment and 3,000 scientists.

“We want our R&D to be focused on finding, inventing and discovering great innovations,” he continues, describing the innovation team as a squad of senior marketing people working in conjunction with R&D to identify the most interesting, biggest opportunities. “It’s very often in the confrontation of R&D — positive confrontation — between scientists and marketers that you find the great ideas.”

L’Oréal spent 3.3 percent of total sales on R&D last year, widely considered the highest ratio of research funding in the industry. With total revenues of 17.54 billion euros for 2008, the R&D budget would amount to about 580 million  euros, or $853.4 million at average exchange.

One avenue of great interest is natural products.“Green is the future,” Agon says. “It’s not the only future, but it’s a major way of the future. My dream is that one day we’ll be able to formulate a product with pure natural ingredients — well chosen, well identified, well formulated — that will be more efficacious than any chemical [product] existing today. It’s absolutely possible.”

Number three is to put the money and energy into bigger opportunities rather than fiddle with esoteric possibilities and long shots. Agon explains that he’s not just talking about focusing on big brands exclusively. Niche dwellers are worthy, if they demonstrate potential to grow significantly. “Some of our small brands are sometimes the most profitable, he says, singling out Kiehl’s, the fastest-growing brand in L’Oréal, as “extremely profitable.” Kérastase is another.

Since taking office in April 2006, Agon has hotly pursued a strategy of developing business in previously overlooked regions, which L’Oréal calls “the rest of the world.” Far from being deterred by the recession, Agon is accelerating the pace of globalization. “In past years, the growth that we had in the rest of the world — around 15 percent — was very solid,” he notes. “Every year the percentage of the rest of the world is growing by 2 or 3 percent, from 27 to 30 to 32.”

He speculates the recession will not slow the process of globalization in the world economy, so L’Oréal should step up its profile in already-tapped markets such as China, India and Brazil, while entering virgin territory. New targets on his list are the Middle East, the Gulf countries, Africa and Central Asia, where L’Oréal scarcely has a presence. New subsidiaries are being established in Egypt, Pakistan and Kazakhstan.

“The growth that you can get today is different from a few years ago because the market itself is not the same,” he says. “What I am sure of is that, in the total growth of the company, a very big chunk has to come from growing in the markets where we’re established and where our market shares are smaller. It’s obviously easier to grow your market share in a country where you have 8 or 9 percent market share than in a country where you already have 30 percent.

“That’s what we are doing in Asia, in Latin America, in India — where the potential is still huge,” he continues. These incremental markets still add total growth, he notes, pointing out that a country like Egypt is too big to ignore.

He adds that established and mature markets are not getting short shrift. “We are organized by zones and each has the mission to increase its market share,” Agon says. “So when you are in France and you have more than 30 percent market  share, you still have the mission to increase your market share. But the guy in China or in Thailand, when he has only a 10 percent market share, the potential for acceleration is definitely bigger, easier and faster. These incremental [markets] just add to the pie of the growth.”

The strategy for the mature markets “is to grow the position that we have in every channel with every brand and in every division,” he says. “Depending on the years—some years we are growing faster than others — but all in all, our positions are growing,”

He points to the U.S., which Agon describes as “a very tough, competitive, consumer products market.” Still, the company increased its market share, particularly in skin care thanks to the launch of Garnier’s Nutritioniste.

“All in all, last year our market share grew slightly,” Agon says. “Our growth in [sell-through] was a little bit above the growth of the markets.”

“It’s true that last year the luxury business in the U.S. was quite, quite tough,” he says. “The department store business was not really good. Our competitors have increased tremendously their promotional pressure. We lost slightly market share but our intention is to catch up and gain again.”

His final point of attack involves upping the ante in the market wars by fattening the war chest for media and promotion. “We want to strengthen our investment in business drivers — not only the media, but also everything that you invest in…like promotions, animations and promotional materials,” he says. “Our ambition is to increase the percentage spent [on] business drivers.”

He also expects to win some “very, very good deals” in this cash-starved business climate, when companies are slashing their ad budgets. “The media has never been so interesting to buy,” he says. “With the same money, you can get much more.”

But he adds that L’Oréal intends to lay down money “on the most productive bets in terms of products, brands or channels to get more bang for our bucks, as you say in the U.S.,” he says with a smile.

Agon also offered figures to refute a criticism made by one equity research firm, Sanford C. Bernstein & Co. LLC, that L’Oréal has shaved back advertising and promotional spending as a percentage of sales, thereby lessening the marketing muscle that the brands need for development. “It’s just wrong,” the L’Oréal ceo says, declaring that the percentage of sales spent on business drivers in the last four years was constant — 30.1, 30.3, 30 and 30.1.

L’Oréal also uses its marketing power for a host of more altruistic projects, such as the Women in Science Program, which Agon thinks of as a “kind of Nobel Prize for women.” He proudly mentions having received the Stanley C. Pace Leadership in Ethics Award in New York recently and the L’Oréal Foundation being cited for its work. Other initiatives are dedicated to fighting AIDS and reducing carbon emissions.

All this adds up to a determination by Agon to make L’Oréal a good citizen. “For a consumer goods company, it’s critical,” he says, because L’Oréal’s image hinges not only on quality brands, products and advertising, “but it will also depend on how the company behaves.”

This ties into Agon’s theory that what L’Oréal needs to succeed in the future is “to keep the spirit and the values that have been at the heart of the company for these 100 years. He mentions Charles Revson’s famous motto of “hope in a jar,” and says that L’Oréal’s answer, even back then, was “science in a jar.” That belief in research has been unshakable, he observes, and “it’s more than ever very important.”

“It’s about innovation,” he says. “But it’s more about the spirit — a passion for beauty, a quest for excellence in terms of science, innovation, quality and a real faith in research.”