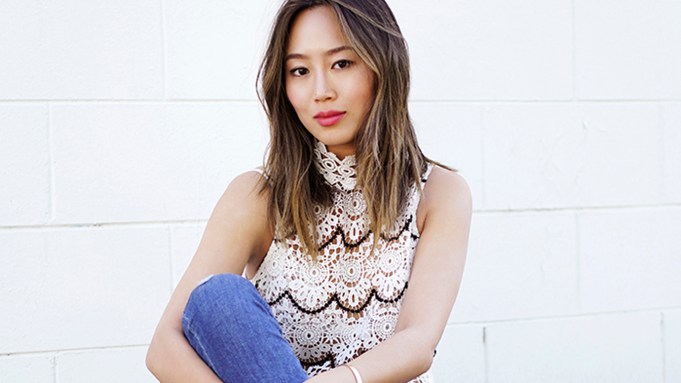 Song of Style’s Aimee Song is singing — all the way to the bank.

Song just signed up to be Laura Mercier’s newest brand ambassador and its first digital influencer, inking a deal that’s believed to be one of the largest to date between a beauty brand and a blogger.

“It’s the biggest deal ever — and it’s not just [the money]. It’s the deepest relationship I’ve ever had with a brand. Even though I continue to work with [many] of the same brands — it’s never been, ‘I’ll work with you for a year.’ That’s never happened to me,” Song told WWD. She declined to say how much she’s getting paid but a source close to the brand confirmed that the deal is worth more than $500,000.

The yearlong partnership has her creating content for her blog at songofstyle.com, posting Instagram images and making appearances at fashion and beauty events on behalf of the brand. She’ll also create video content for lauramercier.com and incorporate it onto her own social channels to elicit maximum engagement from her 3.4 million Instagram followers.

Song, who has worked with SK-II and Dolce & Gabbana fragrances previously, said she has a lot of creative control and plans to keep her content “as organic as possible.” She started using Laura Mercier long before the deal and will continue to use the other beauty brands that are part of her daily routine.

“There are very few brands that I just can’t work with,” Song said of the terms of her agreement.

“She’s not exclusive [to us]. We want her to be able to work with other brands,” said Nancy Bernardini, general manager and chief executive officer of Gurwitch Products, parent company of Laura Mercier, calling Song a “great example” of the Laura Mercier consumer. “We want it to be organic as well — and one of the reasons we chose her was because we knew she organically uses the brand already and is a brand loyalist.”

Song can create content that features other beauty brands and is allowed to contractually work with other brands during the course of the yearlong partnership, with the exception of a handful of competitive names.

“There is the most opportunity in beauty, and even if you pore through the pages of a magazine you see a large percentage of ads being beauty,” said Karen Robinovitz, cofounder of influencer management firm Digital Brand Architects, which represents Song, Chriselle Lim of The Chriselle Factor, Rachel Parcell of Pink Peonies and Julia Engel of Gal Meets Glam.

“When you look at digital advertising, you’ll definitely see more beauty [ads] than you do fashion. The beauty brands really like to speak to the fashion influencer because they are creating such a high level of editorial content and really motivating their audience to follow everything they do,” Robinovitz continued, noting that when a fashion influencer posts about beauty it quickly becomes one of their most engaged posts because of the accessibility of the category.

Laura Mercier is just the latest beauty brand to start thinking big when it comes to bloggers.

“All of the major beauty brands are starting to think about the large-scale deals and putting a digital influencer in advertising the way they would an A-list actress,” a beauty source said. “Everything they do needs to have a large-scale holistic integration for it to be successful.”

Kristina Bazan, who has 2.3 million Instagram followers, reportedly signed an exclusive one-year contract with L’Oréal in October that’s worth at least $1 million. The 22-year-old blogger’s ambassadorship reaches beyond the digital space.

“She’s a traditional ambassador,” said Jennifer Powell, head of Next Model Management’s influencer division, which orchestrated Bazan’s deal with L’Oréal. “Whenever you’re considering doing something at that magnitude it has to be exclusive. The brand must have depth of different products that they have so you’re able to produce a variety of content. But it also affords you more opportunity to do content.”

Bazan, for instance, is attending the Cannes Film Festive with L’Oréal, which presents a prime opportunity to produce content for her blog, Kayture, and her social channels.

While others are catching up, Bazan’s is still believed to be the largest beauty deal that a blogger has signed to date.

Chiara Ferragni of The Blonde Salad has beauty partnerships that span YSL beauty, SK-II, Eyeko, Ormana, Chanel, Dior, Kenzo and Pantene. The latter, inked at the end of last year, is the biggest deal of the group and rumored to be in the midsix figures.

Arielle Nachmani of Something Navy is reportedly earning between $200,000 and $300,000 for her work with TRESemmé, which now includes national TV commercials.

But these megadeals are still few and far between.

Similar to celebrities, yearlong ambassadorships are the holy grail of beauty deals for influencers — with one-off and short-term partnerships being the ticket to getting there.

A beauty insider said smaller deals surrounding a single product launch could equal a payout of just $5,000, but it’s common for “short-term” deals with top bloggers to fetch six figures if content features influencers with a substantial reach, several blog and social posts and a “decent level of production.”

For instance, Chriselle Lim of the Chriselle Factor worked with Dior surrounding the launch of Dior Prestige La Crème in November of 2015 and has also produced sponsored content around the brand’s Dior Addict lip colors. Like Song and Ferragni, Lim has worked with SK-II since last year, and in 2014 worked with Estée Lauder to create a series of videos.

Similarly, Danielle Bernstein of We Wore What had a contract with Maybelline during New York Fashion Week in February and Julie Sarinana worked with La Mer in a similar capacity earlier this year.

“I’m careful when girls start engaging with beauty brands because it could create conflicts,” Next’s Powell said. “A girl lost a hair deal because of something she did six months earlier in an advertorial with a conflict brand. The conflicts are real.”

Powell said a lot of the work she’s doing in the beauty space is about developing a relationship: “It’s like dating. It has to make sense and resonate with the brand and talent.”

Once the relationship has been established though, she cautioned that she never lets brands have approval of content produced by her talent. While she does “respect and wants to make sure the brand’s objective is represented,” Powell said the preservation of the content and the voice of the influencer always comes first.