The advertising campaign spotlights men in an effort to shift ideas surrounding men who wear makeup. 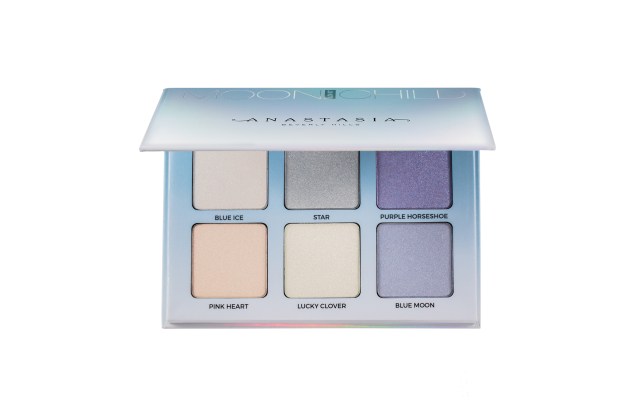 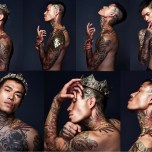 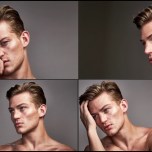 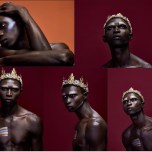 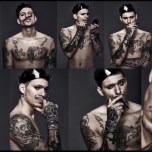 “When I was little in Romania, there wasn’t a lot of television and things like that, so I had two films — one of them was ‘[The] NeverEnding Story.’ It was very important to me,” Soare said. Moon Child is the name of the film’s protagonist.

“Everything about this highlighting kit is different,” Soare said. “It’s not what you would expect.”

Inspired by the colors in the movie, the highlighters come in Blue Ice, a diamond white with icy-blue reflect; Star, a moonstone fusion of mint, platinum and silver reflect; Purple Horseshoe, a glittering lavender with arctic blue reflect; Pink Heart, a pearl white with pink opal reflect; Lucky Clover, a green-infused gold with canary yellow diamond reflect, and Blue Moon, a blue with silver reflect. The palette will retail for $40.

“Sometimes makeup becomes very stagnant or very boring,” Soare said. “I wanted to make something that may not necessarily be mainstream…[just because] the line is becoming successful…the line is not moving [from] its core essence of caring about the artists.”

The campaign for Moonchild shines a spotlight on men — something Anastasia Beverly Hills launched with Darkside, its eyeliner. The idea is to highlight strong, male figures wearing makeup while maintaining their masculinity. “There’s this misconception that every male that wears makeup is a drag queen and I think that’s wrong,” Soare said. “Everything about this new product and this campaign represents the acceptance of yourself as being different, the acceptance of your creative self [and] creative freedom, which is a big thing for me.”

Moonchild is part of Anastasia Beverly Hills’ move from brows into other cosmetic categories. “Because our brow has coined a specific look, it makes sense then to trickle down to the rest of the face,” Soare said.

Soare declined to provide any financial details on the business, but industry sources estimate the brand is growing and sales hover between $125 million and $150 million. Anastasia Beverly Hills is trending up on social media, too, according to data from Tribe Dynamics — which said the brand’s earned media value, or EMV, increased 47.7 percent between May 2015 and May 2016.

“Anastasia Beverly Hills’ EMV dominance derives from the brand loyalty that it has fostered through consistent on-brand representation and attentive and inclusive interactions with ABH’s online community,” said Brit McCorquodale of Tribe. “The hyper-glam ABH ‘look’ and voice are well-defined, and the brand’s hero products enable loyal followers to easily create the look for themselves and join the community. ABH’s frequent and democratic reposting not only aligns the brand with the loyal and invested audiences of established influencers like NikkieTutorials, but also gives burgeoning influencers and followers the coveted feelings of reward and recognition.”

Anastasia Beverly Hills’ color cosmetics line launched in Macy’s Inc. and has since spread to Sephora and Ulta. It’s the brand’s second attempt at color cosmetics — after a deeper dive into the category didn’t pan out in 2000, Anastasia switched her focus back to the brow, she told attendees at the WWD Beauty CEO Summit in May.