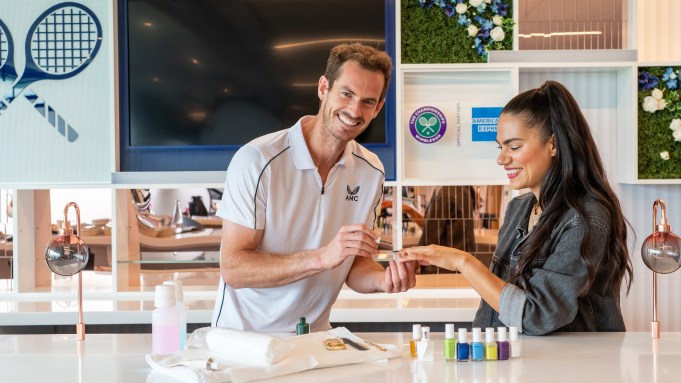 LONDON — It’s all about the power of the hand at the Wimbledon tennis championships.

“It was definitely a first for me, but it was interesting to hear about nail art from Michelle,” said Murray, adding that “it’s such an intricate process. I have three young daughters, so I am hoping my newfound skills will come in handy.”

The concept was off of Murray’s radar, but after Humphrey painted his nails with tennis balls, it was the conviction of his daughters that gave him the green light, he said, recalling that they “absolutely loved it.”

Humphrey took inspiration from the SW19 grounds and sport itself, which has become an online phenomenon on social media otherwise known as tenniscore.

“The designs are bold, abstract and make use of the popular negative space trend,” she said, revealing that “Andy has a great sense of humor and was really easy to work with.”

Nail art has always been synonymous with musicians and recently with male stars, too, such as A$AP Rocky and Harry Styles, who launched his own beauty brand in November called Pleasing, which sells nail polishes, skin care and apparel.

However, Mick Jagger, David Bowie and Lou Reed have been sporting nail art as early as the ’70s.

In 2020, Chanel added nail varnish to their Boy de Chanel collection in a bid to attract more male customers.

The malepolish trend has gone from niche to mainstream and soon, it may be the latest accessory that every male athlete will be sporting on their respective courts.