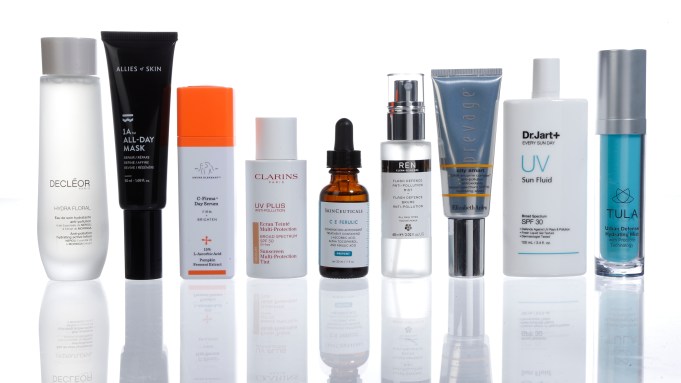 Antipollution is the latest buzzword in skin care.

And much like its buzzy predecessors — think BB creams and brightening products — the craze is starting with an Asian market that’s eager to defend their skin against high levels of ozone pollution.

“People are beginning to see the effects of pollution on their skin, and many are taking note from Asia, where in many places it’s highly industrialized and polluted. They want to have healthy skin and will take the extra time to apply products targeting antipollution,” said Dr. Sung Jae Jung, Dr. Jart’s lead dermatologist who is based in Seoul, Korea.

He stated that pollution levels are drastically higher in Asia, and it’s become a necessity to formulate skin-care products to address its detrimental effects on skin.

Dr. Jung is clear that this doesn’t just apply to those who live in urban areas or places with manufacturing factories. It affects everyone to a different degree, as there are various levels of ozone pollution (or what’s become knows as “ground-level ozone”) that includes a mix of sunlight and chemicals emitted into the environment, spanning exhaust fumes from vehicles, industrial smoke and secondhand smoke.

Dr. Jart’s latest product is a sun fluid that double blocks UV rays and fine dust. By mirroring the characteristics found in magnets that repel one another, the formula is designed to have the same electric charge as fine dust and ozone pollution in order to create a protective layer on the skin.

The threat posed by pollution is real, and experts are clear that using ingredients designed to target, address and defend the skin against environmental aggressors isn’t a fleeting trend in skin care. Whether these products have been on the market for years (SkinCeuticals or Drunk Elephant’s antioxidant formulas, for example) or they’re being developed specifically for this purpose, companies have decided it’s a growing category.

“A study in China that looked at women in a rural area and women in an urban area found that the ones in the urban area age 10 times faster — and these are actual facts,” said Dr. Leslie Gerstman, a board-certified physician who specializes in aesthetic medicine.

She explained exactly what pollution does to one’s skin: it depletes Vitamin E, cholesterol and squalene, a natural antioxidant found in one’s sebum. It also causes a surge in free radicals, which causes collagen breakdown, as well as a decrease in the skin’s pH balance, making skin more acidic. The sun and UV rays are still the most prominent pollutants — and the biggest cause of skin damage, accelerated aging and skin cancer.

“Products that defend against pollution do already exist, and brands don’t have to change their labels to say that it’s an antipollution product,” Dr. Gerstman said of formulas already on the market that are infused with antioxidants, natural oils, pH balancing ingredients, and most importantly, sunscreen.

But the influx of products labeled as “antipollution” can be beneficial to beauty brands from a marketing standpoint and help bring awareness to customers. The issue is fast becoming top of mind for brands and consumers alike, according to executives, and products promoted to specifically address these environmental factors could be an instant selling point — and ultimately result in a lift in sales.

This is the hope of Decléor, which has created two new product extensions that fall under its best-selling Hydra Floral line and given them an “antipollution” spin.

“To create a stronger formula and fight the side effects that pollution creates like inflammation and lack of radiance, we improved the existing formula — which was already rich with Neroli and other essential oils — with a few new ingredients,” said Jaklin Idris, Decléor’s national director of education, adding that the main purpose of essential oils, which have been the cornerstone of the brand’s formulas for over 40 years, is to stimulate cellular rejuvenation.

But for SkinCeuticals, whose best-selling CE Ferulic and Phloretin CF serums already contain a host of antipollution fighting ingredients such an antioxidants and Vitamin C, the company has more of an “if it ain’t broke, don’t fix it” approach.

This was the third phase in a multiyear study that looked at ozone pollution in cells, according to Harris.

“We were looking at it in cells, in vitro, and then moved to reconstructed models to further prove the concept,” she said. “Then we moved into people to see what it does to the skin. What really is the impact?”

Harris said the company has been looking to antioxidants for environmental protection for 15 years — and they are well aware of the power of the formulations. But an increase in pollution, climate change and a public that’s more cognizant about the impact of climate change has resulted in a desire to preserve the skin — which Harris called “your first line of defense.”

“Pollution is part of a larger field of atmospheric aging. It’s no longer just the sun that’s our enemy. It’s now more and more components of the atmosphere that our skin needs protection from,” Harris said.

She explained: Damage happens when ozone interacts with fatty acids that are naturally occurring in the skin. When ozone hits the skin it oxidizes the fats and lipids, and antioxidants — because they neutralize free radicals and prevent oxidation on the surface — can intercept the damage before it even happens.

Like SkinCeuticals, Elizabeth Arden also conducted in vitro research that looked at the effects of pollution while developing its City Smart formula.

The multipurpose product, which will retail for $68, was created with an Antipollution Shield Technology that filters out 98 percent of UVB rays and a patent-pending Antipollution Complex that contains Idebenone, billed as the most powerful antioxidant (and hero product of the Prevage collection). The 11-year-old Prevage range launched after it was found that environmental damage — from sun to pollution to oxidative stress — is the number-one cause of skin aging.

Lavinia Popescu, head of research and development at Elizabeth Arden, said an Urban Dust study was conducted to show exactly how City Smart protects against pollution in four global cities: Los Angeles, New York, Mumbai and Beijing. Urban Dust, she explained, is a time-integrated sample comprised of harmful nano-sized pollution particles that mirror the type of pollution found in major cities. Through in vitro testing, the viability of cells exposed to Urban Dust improved by five times when protected with City Smart. The control group, which contained 3-D skin cells that weren’t exposed to City Smart, started to die within 30 minutes of being exposed to the highly concentrated Urban Dust. The cells that were exposed to the product didn’t start to lose their viability until two-and-a-half-hours passed.

“Our skin is exposed to a lot more now. You may not be in New York, but if you’re in Tokyo or Shanghai or Sydney, you still face pollution and cigarette smoke and things that living in a city brings. Every product should protect the skin against pollution,” said Nicolas Travis, founder of Singapore-based brand Allies of Skin, which will launch in the U.S. next month.

Less than being a trend, developing a product containing antioxidants was a necessity — which is how his 1A All Day Mask came to fruition. The $88 mask forms a breathable, antipollution shield that is designed to prevent particles like cigarette smoke, smog and heavy metals from acid rain from doing any damage to the skin, according to Travis.

Designed to be as concentrated as a mask but absorb like a moisturizer, the product contains caffeine, 11 antioxidants, honey, phospholipids and aloe.

“If you’re outside and there is pollution, your skin will use the 11 antioxidants to fight that. The antioxidants will kick in,” Travis said.