Cate Blanchett, Catherine Deneuve and Nicholas Hoult were among the guests attending the intimate dinner party.

VENICE — “Simple and beautiful moments together, something to share,” was what Armani Beauty global president Véronique Gautier expected from the dinner party the brand threw here on Saturday during the city’s 76th International Film Festival. The beauty brand was this year’s main sponsor of the festival, yet there was nothing simple in the beautiful and elaborate frescoes of the 16th-century Papadopoli palazzo that houses the Aman Resort hotel where the dinner was held.

Guests gathered in one of the halls overlooking the Grand Canal after hitting the premiere of the “Joker” movie, one of the most eagerly awaited screenings of this year’s festival. Armani Beauty’s Sì fragrance franchise face and global beauty ambassador Cate Blanchett led the pack, switching the Armani Privé fall strapless black gown adorned with pearls she sported on the red carpet for a coral number belted at the waist with shoulder embellishments that she paired with black flats for more comfort. 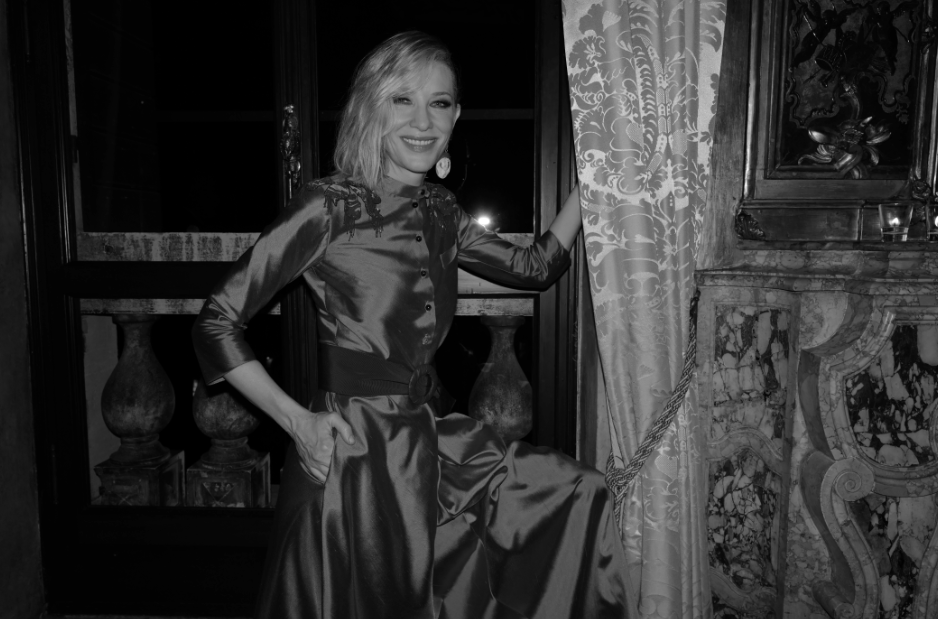 There was no time for an outfit change for Catherine Deneuve, who donned a black velvet jumpsuit bearing Giorgio Armani’s signature all over it and who defined her time in Venice as “quite busy,” before catching up with French actress Isabelle Huppert. Deneuve presented her latest film effort — “La Vérité” (“The Truth”), in which she stars with Juliette Binoche — on the festival’s opening day, offering a performance that left Barbara Palvin teary-eyed.

“Catherine Deneuve is still so gorgeous and she was amazing in it and Binoche made me cry in the movie, so I guess that’s good acting,” said the Armani Beauty face. Although intrigued by the movie industry, Palvin admitted she is “not ready for it yet.”

“But we don’t know what the future holds, if they come up to me [asking] to play Catwoman or a ‘James Bond’ girl, I’m not going to say no. I would try something that’s out of my character, that is a little bit challenging — and any Disney movie,” she added with a smile.

Musicals are more up fellow brand ambassador Sara Sampaio’s alley, as they “put everything that I love together: acting, dancing and singing.”

“I’ve been trying to get into acting more, it’s what I’ve always wanted to do.…There’s just something so awesome about movies, you get to be someone else every day, experience these many lives,” said the bubbly Portuguese model. “Even just doing acting classes has really made me come out of my shell and more confident, because you stop taking yourself too seriously.” 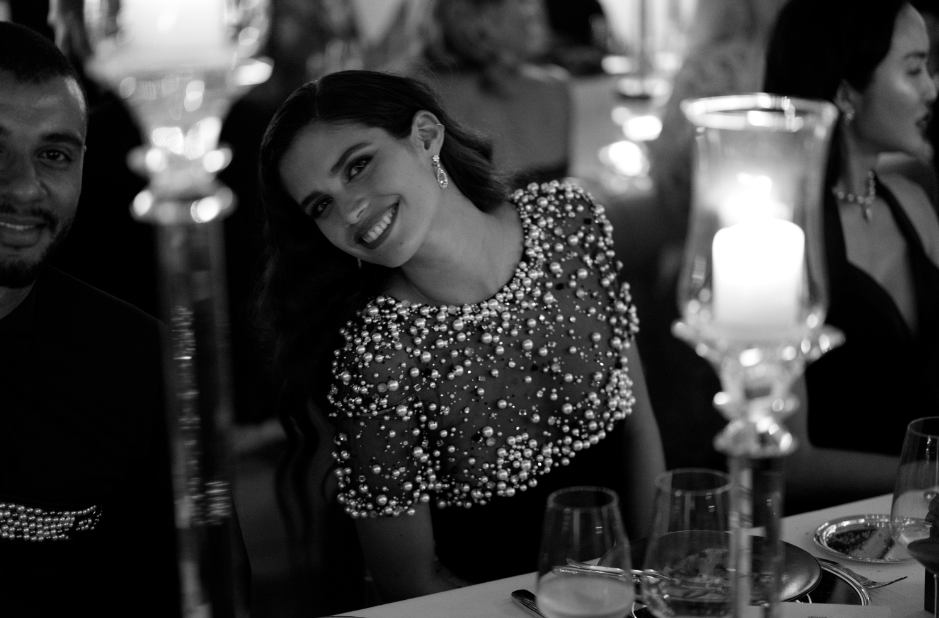 Asked about her favorite film, Sampaio had no doubts. “I freaking love ‘Moulin Rouge.’ I cry every time she dies. But then I also love ‘Mr. and Mrs. Smith,’ because Brangelina forever!”

Greta Ferro opted for “’Cloud Atlas’ with Tom Hanks and a great cast, it’s the movie that actually changed my life.…And I suggest everybody to see ‘About Time’ with Margot Robbie in it. I have a huge girl crush on her.”

The Italian model is already adding acting to her résumé. After starring in “Una Giacca” (“A Jacket”), a short film produced during the first edition of the Armani/Laboratorio free training course in the field of cinema, she will be one of the protagonists of “Made in Italy,” an eight-episode TV series set in the Seventies that spotlights the development of Italy’s ready-to-wear designers who have helped build the country’s fashion industry. This evolution will be narrated through the eyes of Ferro’s character, a young journalist working at a fashion magazine. As reported, the series will premiere this fall and Armani will be one of the designers portrayed, played by Italian heartthrob Raoul Bova.

“For this TV series, the character that I played was very similar to me…which made it easier for such a hard first experience, with five months of quite intense shooting,” explained Ferro.

Sporting a baby-blue Armani pantsuit, the model felt at ease chatting with Blanchett seated in front of her at the long, candlelit dinner table laden with red roses. Her dining companions included brand ambassador Madisin Rian and British actor Nicholas Hoult, who stood out in head-to-toe black among the female star-studded gathering. His attendance hinted he could be next to join the family of faces fronting Armani Beauty campaigns, flanking Ryan Reynolds in the role. 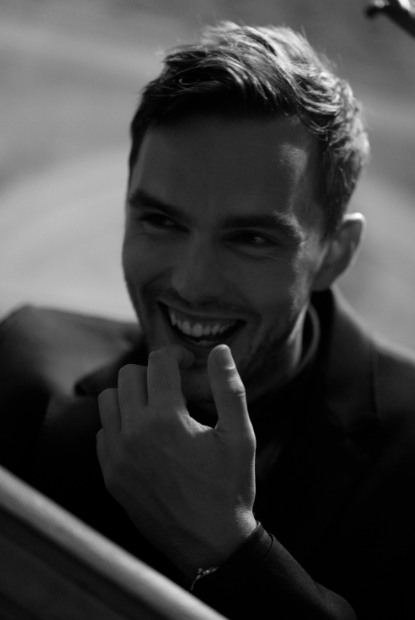 “We will reveal other actors to showcase our perfume,” teased Gautier in an interview with WWD before the dinner. The executive also revealed 2020 will be marked by “a strong renewing” of the Acqua di Giò men’s fragrance through “a new platform and newness in product” and the launch of a new scent for women.

The beauty label continues to bank on the appeal of faces from the world of cinema, but for Gautier the key is to find a balance between the accessibility the medium offers consumers as an art form and an elevated vision of femininity and masculinity. “When we choose actresses and actors we want simple people, and very often simplicity comes with talent,” she said, pointing to Blanchett and defining her as a “gift — she’s not any actress.”

The relationship between cinema and Armani transcends the beauty business, though. Over the years the designer has created the costumes for a range of movies, from most famously, “American Gigolo” in 1980, creating a wardrobe for Richard Gere, to “The Untouchables” and “The Wolf of Wall Street,” among others.

The brand’s sponsorship of the Venice Film Festival strengthens the bond, offering the company the opportunity to boast all its fashion and beauty assets at the same time via the celebrities donning full looks on the red carpet, as shown by Binoche and by the event’s godmother, Alessandra Mastronardi, at the opening ceremony.

“Why this festival? Because we are Italian, of course, but also because this is one of the most elevated cinema events,” said Gautier, defining the move as a natural choice.

In particular, the executive underscored how the event’s global impact has significantly increased year after year, mentioning the international guests appearing on the red carpet this time, including Brad Pitt, Joaquin Phoenix, Scarlett Johansson, Laura Dern, Kristen Stewart and Rooney Mara so far, and the strength of the films in competition. “It’s also one of the first festivals to include Netflix productions,” she added, highlighting the importance of showcasing diverse projects. 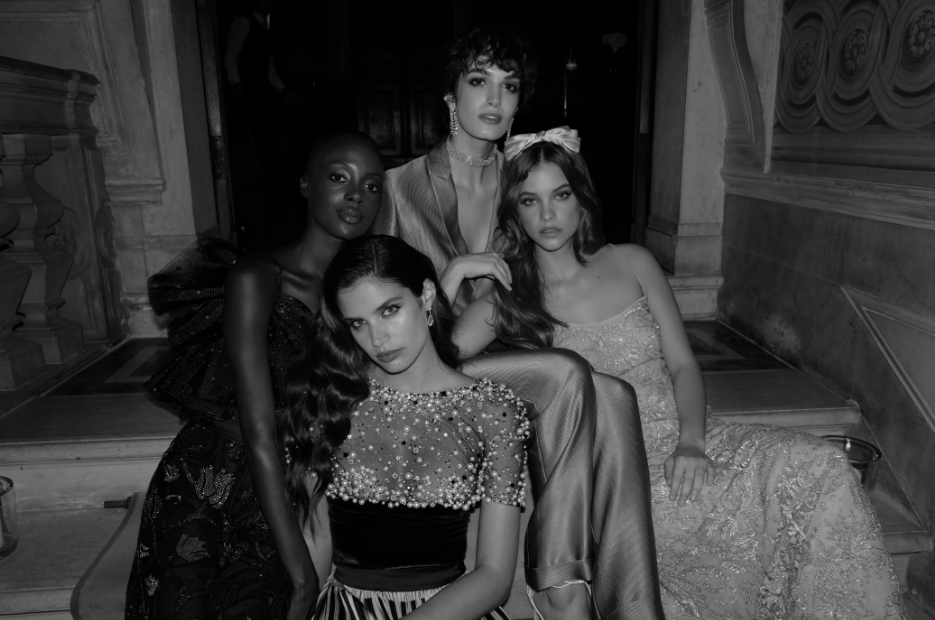 This is not the first time Armani Beauty has supported the festival, but this year marks its debut as the main sponsor, implying that it’s the official makeup provider for all the guests walking the red carpet. This required a stepped-up effort by the brand’s makeup artists in town, who render services both in actors’ hotel rooms and at the Armani Beauty Backstage booth staged inside the Palazzo del Casinò, where the film screenings are held. Partners and guests from more than 15 markets were also invited to experience the event.

Part of the operation’s benefit is the increased social media conversation around the brand. Gautier believes the film world is a signature asset of the label and generates a strong impact in terms of social buzz, as Armani Beauty platforms are registering the highest rate of engagement during the festival.

In addition to the Venetian event, the brand supports the Shanghai International Film Festival and the Hong Kong Film Awards. “Once again, Armani wants to be where the things are upping and we know Asia is moving so fast, plus the brand is very strong there,” said Gautier.

In particular, Armani Beauty’s makeup and skin-care categories are performing the best in the Asian market, while growth in Europe is driven by fragrances, led by the Sì Passione scent launched last year.

The feminization of the business was one challenge the company faced over the last years. “The brand has been very strong in the male fragrance market first. That gives you a strong, more masculine, identity, close to [the one of] Acqua di Giò. So we had to succeed in the other segments through makeup and perfume like Sì, and that’s what we have been doing since seven, eight years. Now the [next] step is skin care,” said Gautier, mentioning that increasing “really quickly in the new ways of talking with women” is another priority for the brand.

The Giorgio Armani Fragrances and Beauty business has been part of L’Oréal’s Luxury division since 1988. Asked about the secret behind the longevity of the brand, the executive credited the fashion house’s founder. “Everything we do and you see in the market is something Mr. Armani wanted, it comes from him and it’s done with him. He has a consistent vision, it’s his signature [on every product].”

As reported, last year the two companies agreed to renew their beauty license until 2050, which Gautier defined as a sign of confidence from both parties. “This gives us the opportunity to think and take the right decisions on a long-term basis,” she concluded.