Avon introduced three of its upcoming product innovations against the backdrop of a new Global Research & Development Center in Suffern, N.Y. 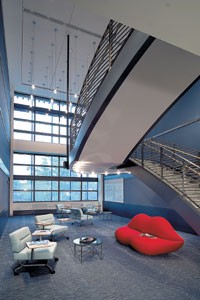 Avon’s 225,000-square-foot R&D center, which opened in April, occupies the same plot of land as the company’s first facility, built in 1897. The sprawling structure, which has a facade of glass and steel, houses more than 300 scientists and technicians, all of whom help to churn out 1,000 Avon products each year. It was designed by the architectural firm HLW International LLP.

“R&D is the heart and soul of the brand,” said Janice Teal, group vice president and chief scientific officer, Avon Products Inc., adding that the company invested $100 million to build the facility, which stands in the former parking lot of Avon’s former R&D center.

“We are truly committed to resourcing beauty,” noted Jill Scalamandre, senior vice president of global beauty brands Avon Products Inc. Referring to the new facility, Scalamandre said, “It solidifies and shows the commitment we have to beauty.”

During a tour of the center, Avon introduced three products, all slated to bow back-to-back in the fourth quarter. The first product, Anew Alternative Intensive Age Treatment, brings the Anew skin care franchise into the realm of Eastern healing. Described as an ‘herbaceutical,’ Anew Alternative was designed to meld Eastern plant therapies with pharmaceutical-inspired technology. Avon partnered with research institutions in Thailand and China to develop the formula, which includes herbs such as Szechuan lovage root and neem flower, as well as Glycation-Reversing Technology, a patent-pending complex said to undo skin damage caused by aging.

According to Avon’s consumer testing, 91 percent of women who used the product for two weeks saw more resilient skin. After continued use, 90 percent reported their skin looked and felt firmer. Anew Alternative will be available in September for $32, and supported by print and television ads, along with six million trial packets. Ad visuals will be used to convey product benefits by picturing two overlapping petri dishes — one containing an herb leaf and the other a molecular structure, along with the tag line, “Where Eastern Herbs Meet Western Technology.” A second Anew Alternative product is slated for early 2006. “We see Anew Alternative growing into a major franchise,” said Scalamandre.

Avon will use the September launch to kick off its new Preferred Customer Program. Customers will receive the Avon Preferred Customer Card when they purchase Anew Alternative, Shine Supreme or Avon Extraordinary. The card entitles customers to more than $100 in savings, beginning in late October.

Shine Supreme Lip Color will follow Anew Alternative. Shine Supreme answers two consumer needs by combining long-lasting color with shine, explained Scalamandre. In the process of developing the formula, Avon scientists found that even after wear and tear (drinking, talking, kissing, etc.) the shine continued to bounce back to the surface. The “self-renewing shine” formula will be available in 15 shades for $8 each. Avon will distribute 1.4 million samples of Shine Supreme and support the launch with TV spots featuring Avon spokeswoman Salma Hayek.

As it does each year, Avon will introduce a fine fragrance, which will launch after Shine Supreme. Called Extraordinary, the eau de parfum spray aspires to bring touches of the luxury world to the “ordinary woman.”

The fragrance, developed by Firmenich, has top notes of champagne and sparkling grapefruit, a heart of chocolate orchid and a drydown of chocolate truffle accord.

The flacon has a gold collar and top, and its back panel features a design reminiscent of etched artwork. The fragrance comes with a silver bracelet, inspired by the scroll-like illustration of the bottle. The launch will include ancillary items, such as a shower gel, body lotion and scented candle. The 1.7-oz. eau de parfum spray will sell for $25.

Avon will introduce Extraordinary on the front cover of its brochure, which will include a liquid seal tester of the fragrance.