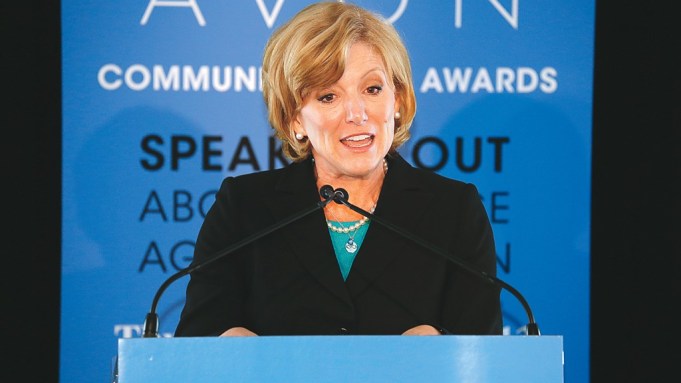 Avon Products Inc. is out to fix the U.S. first.

McCoy gave the most detailed account to date of the various elements of her turnaround plan for Avon in speaking at the Consumer Analyst Group of New York Conference in Boca Raton, Fla.

She wasn’t the only one to admit challenges either: Procter & Gamble Co. chairman, president and ceo A.G. Lafley spoke candidly about the company’s underperforming beauty business, saying “We’re putting [the beauty business] back together.” L’Oréal chairman and ceo Jean-Paul Agon reiterated that the leading beauty firm seeks to gain one billion new customers over the next 10 to 15 years. “We are still small,” said Agon. “There is still a huge potential for market share growth in the years to come.”

As for Avon, Pablo Muñoz, the firm’s senior vice president and president of North America, cited a shrinking pool of representatives, a crowded and difficult-to-navigate product brochure and a bloated cost structure as three big issues hampering the U.S. business. His plan aims to fix those issues with a spate of initiatives, ranging from recruitment and incentives to trimming the product assortment and number of pages in Avon’s brochure.

Muñoz noted that Avon’s product lineup is so vast that all the products would not fit into a year’s worth of the company’s brochures, which drop 26 times a year. “We have too many products,” said Muñoz, noting that going forward, the company will focus on high-value categories, such as skin care, an area where Avon has recently struggled. Nevertheless, the company will also tighten its Anew skin-care range to 31 items from the current 45. “We are creating a new Anew architecture,” said Muñoz, adding that a smaller assortment will allow Avon to return to previous strategies, such as sampling.

Its teeming assortment has lead to missed opportunities, he said. For instance, Muñoz said for the original launch of $4 Mega Effects Mascara in 2013, Avon featured the item in the back of a product brochure. The company took a different approach this year, nearly doubling its price to $7.99, moving the mascara to the front of the brochure and requesting that the representatives attend a training seminar for the new product. Muñoz said the change in approach boosted sales by 40 to 50 percent.

To further streamline the selling and shopping process, Avon will trim the number of pages in its brochure from 180 to 164 this year and to 152 by 2015, representing a total reduction of 15 percent.

Muñoz, who joined Avon seven months ago from Tupperware, said the company’s pricing on many of its products has not changed in five years. “At a minimum, we have to price with inflation,” he said.

Muñoz expects the overall strategy to take hold in 12 to 18 months, and said it also brings a short-term risk to sales as Avon works to reduce the assortment and size of the brochure.

“We think this is the right prescriptive approach to the business,” he said.

McCoy, who offered a more global view of Avon’s strategy, said the firm is working to modernize its business. She noted that Avon launched a mobile brochure app to eight markets in 2013, and will continue to roll it out to more markets this year.

Avon aims to continue to build its e-commerce infrastructure, and plans to relaunch its U.S. Web site, shop.avon.com, later this summer. The redesigned site will allow visitors to shop by category, as opposed to by brochure, and price points will match or exceed those in the brochure. A relaunched U.K. site will follow in 2015.

She also promised more of a focus on Avon’s core products, which in the past had been largely ignored in favor of launches. “We are a new-product machine,” said McCoy, adding that despite the company’s aggressive launch schedule, it had not been creating value. Going forward, McCoy said introductions will come with a three-year support plan. In terms of pricing, she said the company will take a more strategic view. For instance, it plans to put “pricing guardrails in place,” and not discount launches. She reiterated that Avon’s been most successful when it prices with innovation, pointing to the launch of the premium personal-care line Encanto in Brazil, the company’s number-one market. Encanto is now expanding to other markets in Latin America, where McCoy said Avon continues to invest.

On Thursday the company disclosed that it had signed a letter of intent with Coty Inc. — its onetime bidder — that would allow Avon Brazil to market and sell select Coty fragrances through Avon’s 1.5 million independent sales representatives in the country. The details of their commercial arrangement are being finalized, but the plan is for Avon to carry a collection of Coty’s celebrity and lifestyle fragrances in the direct seller’s brochure in Brazil.

“The Coty agreement is an opportunity for us to continue to strengthen our opportunity in Brazil,” said McCoy at CAGNY.

In a related move to leverage its direct-sales channel infrastructure — and its base of six million representatives across the globe — Avon also recently formed a partnership with the Greek brand Korres.

Earlier this month, Avon revealed it formed an alliance with Korres that grants the direct seller the exclusive right to develop and market Korres products in Latin America. The deal covers all major markets in Latin America where Avon operates. McCoy said Korres will help Avon reach new consumers and that the brand is “very well received in the market.” She added, “It fills a gap in terms of our overall skin-care portfolio and allows us to be there as people in Latin America trade up over time.”

In an interview with WWD, Fernando Acosta, senior vice president and president of Latin America, detailed the gaps that McCoy referred to.

Noting that Korres offers powerful natural ingredients and the “magical traditions of Greece,” he said the brand also will provide Avon with a presence in the upper price tier, or a “masstige positioning” over the top of Avon’s mass orientation. “The Latin American consumers have a little more money to access international brands, and we didn’t have a strong play on the top of the pyramid,” Acosta said. He added that Korres also brings a “pharmacy, high efficacy and natural positioning, which is unique in our portfolio.”

“For me, Avon was the perfect partner,” said George Korres, founder of the brand, who was reached in Athens. Korres noted that he had wanted a global partner that could build consumer awareness for Korres, which is now distributed in North America at Sephora, HSN and Shoppers Drug Mart in Canada.

The companies will work together in adapting products where needed. Korres added that as part of the agreement — if all goes well, after a couple years — “we will have the opportunity to buy this brand in Latin America, the whole trademark.”

McCoy told analysts at CAGNY, “This is a turnaround journey, but I am confident we can succeed.”

In other news from CAGNY:

• Procter & Gamble Co. is going back to its well-worn playbook to fix its beauty business.

“In the end, we win with product,” Lafley said. “Beauty is the great industry of promises made and never kept.” Referring to P&G’s success at tripling the growth of its beauty business between 2000 and 2007, he added, “Why did we do well for seven years in a row? We made some simple promises that she [the customer] wanted and we kept them. That’s our game. So, you’ll see us get back to the game.”

He acknowledged that P&G’s beauty business has been stuck at $20 billion. Its track record hasn’t been helped by the revolving door of top management.

“We had maybe half-a-dozen different leaders in the last four years, many of them had never spent a minute in the [beauty] industry,” said Lafley, noting that P&G’s belief in executive development led to an assumption that general management is “fungible.” Now he’s focused on restoring growth the same way P&G had in the past, which was by “building continuity, selectively bringing in people from the outside, people who really know the industry.” Lafley declared, “We’re putting [the beauty business] back together, we’re putting strategies and the business model back together, bringing key players back to the business and we are selectively looking for outside assistance where we want it.”

He continued, “We have more than our fair share of problems, but as I look at it, every one [of them] is an opportunity.”

Asked what role acquisitions may play in restoring P&G’s growth in beauty, Lafley said, “The last thing we need now is an acquisition in beauty. We have plenty of brands in the portfolio and we have plenty of product. We’ve just got to get the product through the pipeline…and we’ve got to get the brand portfolio organized by channel, country and region so it meets consumers’ needs and wants.”

He said the company is finally beginning to make progress in hair care, including with Pantene, but that a full turnaround will be slow. “We’re turning a flywheel here,” he said.

He emphasized that P&G would focus on its core strengths and said an important part of the strategy is choosing where not to play. When pressed by analysts to name its strategic core businesses, Lafley said, “In my view, about 90-plus percent of the portfolio is core.”

• L’Oréal used its CAGNY presentation as a victory lap, with Agon declaring, “We are the champion of beauty.…We are number one in this industry by far.” The beauty firm, which operates across all channels, categories and regions, aims to grow 1.5 times faster than the global beauty market each year. Agon said the company’s strategy relies on research and development, innovation and quality, noting that every year, the firm’s budget for R&D increases faster than sales.

But L’Oréal is far from complacent, he said, noting, “We are also transforming L’Oréal to adapt to the new world.”

In his view, the aim is to globalize while respecting the differences across the markets. Agon said the company continues to scout for new opportunities, noting that L’Oréal was built by acquiring brands. L’Oréal’s track record for its acquired brands is impressive, he emphasized, pointing to Urban Decay and Essie as two examples. He noted that Urban Decay, which L’Oréal purchased in 2012, grew by 42 percent in 2013. Since acquiring Essie in 2010, Agon said L’Oréal has grown the brand by 6.5 times. Agon, referring to L’Oréal’s global market share of 12 percent, said, “We are still small.…There is still a huge potential for market share growth in the years to come.”