NEW YORK — With a 27.3 percent gain in 2004 earnings and a fourth-quarter profit increase of 10.5 percent, Avon Products Inc. chairman and chief executive officer Andrea Jung made good on a prediction she made last April when she said the year... 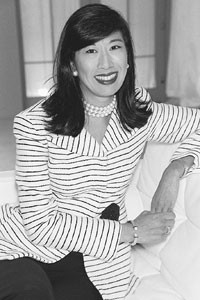 NEW YORK — With a 27.3 percent gain in 2004 earnings and a fourth-quarter profit increase of 10.5 percent, Avon Products Inc. chairman and chief executive officer Andrea Jung made good on a prediction she made last April when she said the year would “reflect the true impact of Avon’s transformation.”

And thanks to a bevy of product launches in the pipeline, including a venture into plus-size intimates, the beauty products giant isn’t planning to slow down in 2005.

“The consistent strength of our consolidated geographic portfolio, together with the tremendous level of cash that our business now generates — more than double the level of four years ago — should provide a very solid foundation for unleashing further growth as we continue to move forward with Avon’s transformation,” Jung said in a statement. The “transformation” refers to a strategy the company implemented in 2001 to improve efficiencies.

In the fourth quarter, New York-based Avon earned $288.8 million, or 61 cents a share, matching the Wall Street consensus, which compares with $261.3 million, or 55 cents, in the year-earlier quarter. Total revenues in the three months ended Dec. 31 were $2.3 billion, up 10 percent from $2.1 billion a year ago. By division, Avon said sales of beauty products increased 16 percent to $1.5 billion, while sales of Beyond Beauty dropped 5 percent to $375.7 million.

Regionally, total sales in the U.S. fell 5 percent in the quarter to $642.1 million due predominantly to a 16 percent decline in the Beyond Beauty category, whose toys and gifts categories will be repositioned in 2005. European sales, however, rose 26 percent to $694.7 million, with Central and Eastern Europe performing strong.

Beauty product sales accounted for 69 percent of the company’s total sales in the year. “The story in 2004 was clearly Anew Clinical, which continued to roll out globally supported by a number of successful line extensions. In total, the Clinical franchise alone delivered over $200 million in sales for the year,” Jung said on a Tuesday conference call with Wall Street.

Further, Jung confirmed that Avon will launch what it called a “foundations” business in the U.S. in the third quarter via a partnership with Sara Lee Corp. to offer Bally and Playtex bras.

Looking to financial results in 2005, Avon forecast earnings of $1.95 to $2.00, versus analysts’ expectation for $1.98. Results in the U.S. are expected to remain soft but ramp up in 2006, Jung said, as its repositioning takes hold. Revenues in 2004 are seen rising 10 percent, while sales are expected to grow over 20 percent in Europe.

In the first quarter, Avon forecast income of 35 cents, which meets analysts’ estimates,  compared with 31 cents in 2004.

Avon ended 2004 with a 18.4 percent jump in cash flow from operations to $882.6 million. Citing the cash flow increase, the firm raised its quarterly dividend by 18 percent and announced plans for a new $1 billion, five-year share repurchase program.

Investors rewarded shares of Avon, sending the stock price up 3.4 percent to close at $43.64 in Tuesday’s session on the New York Stock Exchange.