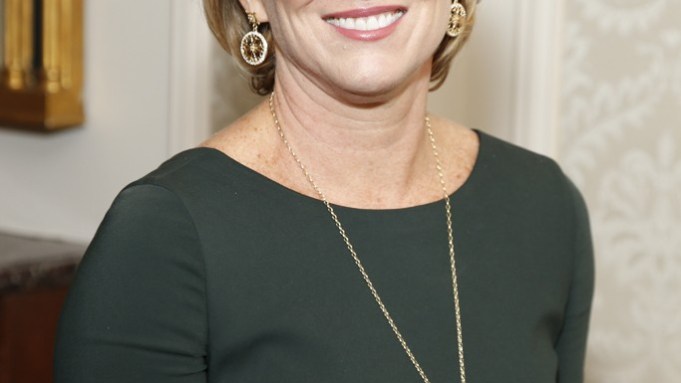 After a year and a half of crisscrossing the globe, Sheri McCoy is thinking locally.

McCoy, who took over the chief executive officer post at Avon Products Inc. in April 2012, aims to shift the company’s product and marketing efforts from one universal approach to more localized initiatives that share a common theme but vary in execution.

It’s a tactic that McCoy believes will keep a legion of more than six million representatives engaged and ensure that the direct seller’s products are just as relevant to consumers in Brazil as they are to consumers in Russia.

“At a micro level, market by market it’s making sure we have the right local insights,” McCoy told WWD. “A couple of years ago, we had a global celebrity who we would use for all our marketing. But today it is less expensive and it works much better to have local celebrities in the markets. We may have the same product and use the same advertising, but we position it differently.”

Avon is due to report earnings on Thursday and Wall Street analysts are waiting to see what impact McCoy’s changes may have on the top line. Nearly one year ago, McCoy set ambitious financial goals of achieving mid-single-digit revenue growth and low double-digit operating margin by 2016.

“The drivers of growth go back to making sure we have the right consumer proposition — that the products are great — to ensure we have the earnings opportunity for the representatives and that we make it easy for her to do business with us,” said McCoy. “It also means making decisions around how we prioritize our geographies, whether it’s where to invest more heavily or where do we exit. The combination of consumer focus, representative experience and geographic optimization are critical to drive our growth.”

Avon’s shift to looking at growth through a more local lens is already visible in the company’s You Make It Beautiful Campaign for the overhauled Avon Makeup Collection, which launched in Brazil in July featuring actress Camila Pitanga. It has since rolled out to 23 countries, including in the U.S., with several markets tapping local celebrities as spokespeople.

“As we’ve rolled out You Make It Beautiful, we are using different faces and different tones,” said McCoy. “So what you see in Turkey is different than what you see in Russia. They have a different ambience that is relevant to the culture.” But the message, she emphasized, is the same: “We give you the products, you make it beautiful.”

Avon is taking the same approach to product development, working to put a local spin on its latest innovations.

“You can’t assume that there is just one customer worldwide,” said McCoy. “There’s no such thing as an average customer.

“We have great products and research and development capabilities and technology,” said McCoy, adding that opportunity lies in tailoring the nuances of the products — the smell, texture and feel — to suit local consumer preferences across Avon’s key markets, which include the U.S. and Brazil, among others. “That’s a change that we’ve made,” she said.

Change is exactly what Wall Street analysts want to see.

McCoy took the helm after a roller-coaster year for Avon marked by a string of poor earnings results; a chorus of bad press directed at her predecessor, Andrea Jung; an unwanted takeover bid from its much smaller rival Coty Inc., and ongoing investigations by the Securities and Exchange Commission.

Since her arrival at Avon — following 30 years at Johnson & Johnson — McCoy promised to take a slow and steady approach to get the company growing. In November, she outlined a plan to cut at least $400 million in costs by the end of 2015.

McCoy’s efforts to cut costs and simplify the business have included unloading the Silpada jewelry business for $85 million — which the company acquired in 2010 for $650 million — and exiting a handful of markets, including South Korea, Vietnam and Ireland. Last week, news reports suggested that Avon also plans to shutter its business in France. McCoy declined to comment on France, but she did explicate the criteria the company uses when it decides to exit certain markets.

“We look at markets from a prioritization standpoint. Some markets we [exited] we’d have to spend a lot of money to be competitive, or we had challenges within the direct-selling areas in those markets. We look at market attractiveness as well as our internal capability, and we made some decisions to exit a couple markets based on the fact that there was lower growth or we didn’t think we could be successful for the long term.”

The theory is that Avon’s resources and focus can now be funneled to its key markets, particularly where the direct seller continues to struggle.

In Avon’s second quarter, total revenues in North America declined 12 percent to $380.3 million, due to a drop in active representatives and a 14 percent fall in beauty sales in the region; in Asia-Pacific, revenues declined 9 percent to $198.1 million, dragged down by its business in China. Avon saw gains in Latin America, where total revenues ticked up 1 percent to $1.25 billion, boosted by Brazil and Mexico, and in Europe, Middle East and Africa, with revenues up 2 percent to $678.4 million, driven by a strong performance in Russia.

As Avon works to catch up, its peers are charging ahead in its key markets, pointed out ConsumerEdge Research analyst Javier Escalante. “The markets where Avon has the most critical mass are the key focus markets for every multinational company,” he said, adding that the scenario forces Avon to defend its share there against both beauty firms and retailers, which ultimately puts more pressure on margins.

Escalante noted that Avon is losing share in Russia, Brazil and China because that’s where its stronger competitors are working to sharpen their edge with increased marketing spending. “The best [McCoy] can do in Brazil and Russia, for example, is stand her ground,” he said. “Avon needs to look for [other] markets where it can have a first-mover advantage, and then develop critical mass quickly,” he added, naming South Africa and Turkey as examples.

But Russia is proving to be a bellwether market for Avon on the digital front and on the product side. For instance, the company has had success in Russia, as well as other central and eastern European countries, moving consumers to a higher price tier with the launch of its premium-positioned cosmetics line called Luxe. The line, which Avon introduced late last year, is slated to roll out to the rest of Europe, including the U.K., by the end of this year.

McCoy pointed to Luxe as an indicator of Avon’s ability to move consumers up the price continuum. “We want to continue to support the base business, but also see where there are opportunities to strengthen the portfolio,” said McCoy.

“It’s about understanding who your representative is and making sure we have the appropriate product offerings and price points so that she has a range of products,” she continued. “It’s about getting the product portfolio right so that you have price points low enough that people will come in and try, but then you ideally want to move them up. That’s one of the benefits of having fashion and home in [the assortment]. She gets more money if she sells a handbag than she would selling a lipstick.”

As for how McCoy plans to surmount Avon’s challenges in key markets like the U.S. and China, she said the plan is to stabilize and then build.

“As it relates to the U.S., it’s clearly turnaround. We’ve struggled in the U.S. for a number of years. We are putting the focus back on the representatives. She’s the core of the company. We’re successful if she’s successful. The focus in the U.S. has been on how we fix the field, the store, which is our brochure, the representatives’ opportunity to earn money, and to look at how we can continue to improve the cost structure of the business.” To that end, Avon recruited former Tupperware executive Pablo Munoz as senior vice president and president of the North America division. He assumed the post in June.

“He has a lot of experience in direct selling and he has been very focused on how to diagnose the situation in the U.S. and figure out what the key steps are to turn it around,” said McCoy.

Turning to China, McCoy said Avon is working to stabilize the beauty boutique model, which has been a work in progress since Avon shifted away from direct selling in the country.

In a bid to accelerate growth across all markets, including Brazil, the firm last quarter said it planned to increase advertising spending in the second half of the year to support its launch program, which McCoy said was more heavily weighted in the back half of this year than in the prior year.

News of accelerated spending rattled some investors, many of whom are looking to see when the investment will be reflected in the top line.

“Last quarter, investors were definitely spooked that the company [forecasted] operating margin that would be flat in the back half of the year,” said Stifel analyst Mark Astrachan. “For shares to outperform, operating margin needs to improve from current levels, while sales growth also accelerates.”

“The board underestimated the importance of industry knowledge when appointing key executives,” said the source, who asked not to be attributed. “They need to first figure out the game before they can play it.”

McCoy sees it differently. “The area of opportunity as it relates to culture is how to become a more accountable culture so that we’re delivering on what we say we are going to do, how to become decisive and making sure that people understand we have a huge responsibility to our representatives because they have invested in this business,” she said. “I have a mix of new leaders who bring a fresh perspective, but we also have people who have been with Avon for a number of years who make sure we are keeping the company values.”

McCoy said the team she is building is the legacy she wants to leave at Avon. Asked what success to her looks like, McCoy said five years from now, she sees “a sustainable company with a sustainable pipeline of leaders. That it’s robust and that we are continuing to grow.…I believe people drive results, and if you don’t have the right people and you don’t develop people within [the company], you’re not going to have sustainability. That’s really a personal agenda of mine.”