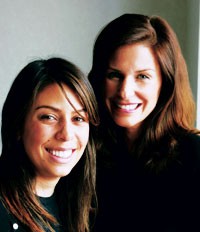 NEW YORK — It’s not like Dineh Mohajer to sit on the sidelines and watch newness and innovation pass her by. After all, the creator of one of the best-known nail polish brands to hit the beauty industry — Hard Candy — can’t help but be a part of something fast-paced, trendy, fashionable and otherwise beautiful.

On this day, Mohajer, 32, and her business partner, Jeanne Chavez, 42, — who joined Hard Candy a year after it launched in 1996 as vice president of sales — were driving from a manufacturing plant in New Windsor, N.Y., to Manhattan’s ultra hip Hotel Gansevoort. While in town from the West Coast, the two will field several meetings and likely spend most of their time in conferences with Bath & Body Works, their new retail partner for their latest venture: Goldie, a cosmetics line that looks to make their beauty comeback a big splash.

The duo are a complementary pair. Mohajer is Barneys New York-meets Indie rock. She talks a mile a minute and can’t help but evoke an image of a free spirit with an unusually high IQ as she jumps from topics such as music, art, fashion and lip gloss formulas. Chavez comes off as country-club conservative, the rock of the two, who may have built some muscle over the years reeling in her business partner’s wild side on more than one occasion.

It may be this blend of sweet and naughty, princess and punk, that helped the two create Goldie, which comprises feminine, edgy manicure kits, cosmetics bags, lip glosses, nail polishes, bronzers and face and eye makeup.

It’s important, too, to mention Leslie Faust, a crucial component in the creators’ business reappearance, who first became acquainted with them during her years as vice president and general merchandise manager for cosmetics at Neiman Marcus. Faust, who left the Dallas-based retailer in January 2004 for Bath & Body Works, was charged to help transform the chain into an apothecary of wellness and beauty. She is a main character in the script that brought the three together again early last year.

Chavez, who spent several years overseeing Hard Candy after Mohajer sold it to LVMH Moët Hennessy Louis Vuitton in 1999, left the luxury powerhouse in 2002 to spend more time with her three young daughters. She did keep her finger on the pulse of the beauty industry, however. Frequent calls were made to Faust to discuss new beauty brands she’d see in Los Angeles stores and boutiques near where she lived.

Meanwhile, Mohajer lasted less than a year as creative director of Hard Candy under LVMH. Rumors were that she didn’t function well in a corporate environment and soon ran off to make a dent in the fortune she accumulated from the sale of the brand, which she sold for an undisclosed amount. (Reports had the brand generating $12 million in wholesale sales the year before the deal was made.) A respite at a spa, travel, eating too much and racking up an estimated $16,000 hotel bill at The Peninsula in Manhattan were among some of her stints, but today the former medical student sees the value in keeping her mind busy.

“I hadn’t been in a place where I was expressing any creative juices because I was dormant for so long. Plus, I was pretty young to have a bank account like that. That was fancy for me,” she recalled.

And in March 2004, the seed for a new business plan was planted.

After Chavez got Mohajer “to buckle down and get motivated” the two came up with a concept that answered both their “cravings, needs and desires,” in terms of being a woman.

“It was just a merging of ideas,” said Chavez of their new line, which tends to appeal to women who are as much in love with fashion as beauty products.

Goldie, which “doesn’t mean anything,” is merely a name the two saw as ageless and nonspecific. “We didn’t want to overthink anything,” Mohajer said.

The line offers elegant color palettes that are wearable and functional, yet there’s something inherently refreshing about them. Packaging, for one, can be described as going head to head with what’s inside boxes: Kits feature sketches designed by Kim Petty, the daughter of musician Tom Petty, and were inspired by a short film she developed, “Alice Cooper in Wonderland.”

The duo spends a lot of time researching young new artists from London to Los Angeles to Australia to decorate their products’ boxes and bottles.

“We like to go to the edge. Some stuff is super sweet and just darling, then some is on the other side, like the Kim Petty stuff,” said Mohajer.

While Goldie is evolving into a 70-plus item collection, what’s most notable are its kits. Decidedly decorative and funky, the kit concept is one the duo will continue down the road, especially themed, seasonal kits that lend themselves to the artwork Chavez and Mohajer track down when scoping out new talent.

Faust, Mohajer said, heavily supported their initial beauty ideas for a line focused on the “Everywoman without boundaries” and in turn made an “enormous impact on our ability to bring it to market.”

Faust admits bringing in Goldie was “serendipity”, stemming from a casual conversation about what the three women loved in their beauty products to what could best fit in with B&BW’s new retail prototype of a beauty apothecary.

“We wanted to do beauty differently than how we were doing it before, which is why we supported the kits idea. We want it to be more of a fashion purchase than a beauty purchase. Why is it sometimes easier to spend $400 on a handbag than to decide on a lipstick? We wanted that ease and emotional appeal and Jeanne and Dineh just nailed it,” said Faust.

In turn, Goldie was meant to be drastically different from Hard Candy, which now has different owners (see related story, page 9.) Some star products in the Goldie line include Goldie Face, a double-decker compact complete with lip colors that can be mixed and matched, two eye shades and two face shades.

“It’s very gadgety,” said Mohajer, who said she tried to mimic the look of a minimalist iPod, both in beauty and in portability.

There’s also a Lip Kit that folds out into three layers and uses every part of the compact’s surface. There’s a lip exfoliator, a lip plumper, a lip hydrator, a treatment balm, a stain balm, a heavy lip gloss and a sheer lip gloss.

Formulas for bronzers were obsessed over, seeing that Chavez and Mohajer  wanted aspects of what was already available on the market combined with characteristics they loved, too. Months of revisions and testing and more revisions, they think, yielded the perfect Face Bronzer and Body Bronzer. Prices range from $9 for nail polish to $38 for a cosmetics bag. The Lip Kit costs $22, the Goldie Face Kit costs $28, and bronzers retail from $20 to $22.

Goldie is merchandised in B&BW’s Beauty Room and is part of their overall color assortment, which also includes products by Awake and Nars. Today, Goldie is featured in B&BW’s new C.O. Bigelow concept store in Columbus, Ohio, as well as in about 70 B&BW stores. Over the next few months, the line will roll out to several hundred more B&BW stores. B&BW has approximately 1,600 stores. Whether Goldie will launch chainwide is still being decided, Faust said, so annual sales are difficult to estimate.

What also sets Goldie apart is a lack of marketing plans: “We never really did that at Hard Candy,” Chavez said. And no, there aren’t plans to get into it now. Growing the brand slowly is how Chavez and Mohajer plan to proceed.

Do the two feel they limited themselves by choosing to launch in B&BW? Not at all.

“We feel that B&BW represents the best things in beauty right now. There is no better place to feature your products,” Mohajer said.

Indeed, the retailer is making inroads, first with its C.O. Bigelow effort, which opened in October and packs hundreds of beauty brands in one setting, such as Acqua di Parma, Biotherm, Slatkin & Co. and Mercier bath and body products. About six to seven C.O. Bigelow stores are planned to roll out in 2005.

Already Chavez and Mohajer are fielding calls from former retail customers looking to get their hands on Goldie, but Mohajer said Hard Candy taught them a valuable business lesson.

“At Hard Candy we grew distribution at such an alarming rate it came to bite us in the behind. We want to take care of this brand,” she said, referring to the former brand’s inventory shortages and distribution problems that once irritated retailers.