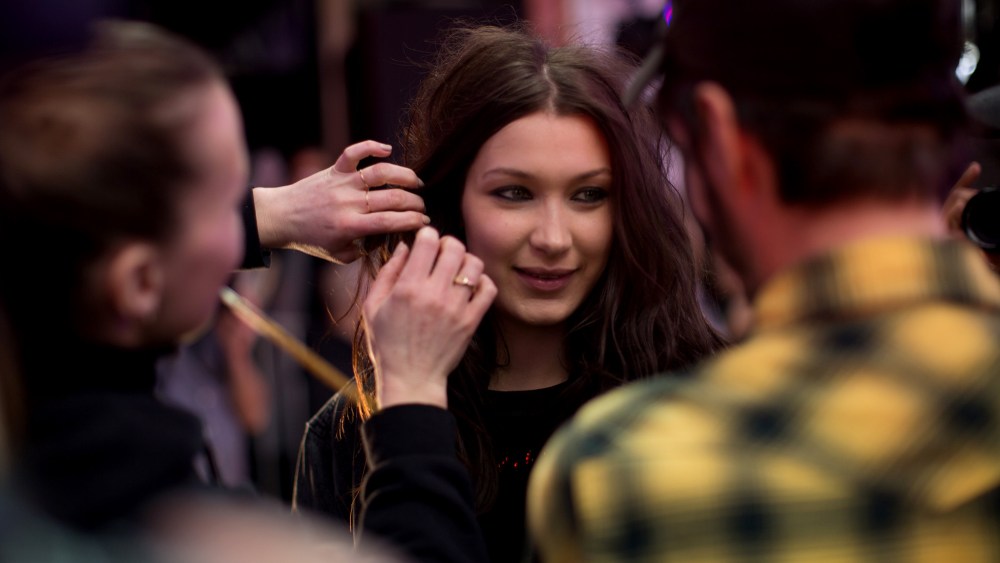 Taking a darker tone this season, the beauty look at Alexander Wang was made for the downtown party girl.

“The inspiration is nocturnal: the girls are out all night,” said Diane Kendal, who keyed makeup for Nars, backstage as models checked in with her for touch-ups. “They’re free-spirited, confident and powerful.” Makeup had a worn-in effect, focusing on moisturizing and toning the face using Nars Skin Luminous Moisture Cream and a new Velvet Matte Foundation Stick to give the skin a matte texture. To create the dark eyeliner, Kendal employed four different black pencils: Larger Than Life Eyeliner, Eyeliner Stylo, Kohliner and Velvet Eyeliner. She used the kohl pencil on the inside of the water line and lower lash line, then softly blended and diffused the color for a worn-in look that wasn’t too messy. She extended the eyeliner to the top of the lash line and filled in gaps where needed. The look was finished with a few coats of Nars Audacious Mascara and gloss over the eyelids. For some models with blonde hair or bangs, eyebrows were bleached.

Again this season, some of Wang’s models volunteered to get haircuts specifically for the show. The haircuts were boyish, some getting parts of their heads buzzed while others got blunt, short haircuts. The most drastic look was seen on model Cat McNeil, who had her long locks cut into a blunt boyish style reminiscent of Linda Evangelista’s look from the Nineties. “They just feel like a very cool gang of girls that you might really want to hang out with,” said Guido Palau, who led hair for Redken. “[The girl] feels very nighttime this time. This time she’s downtown at a party and she might have not gone home for a couple of days.” Aside from the haircuts, other models had their texture enhanced with Redken Wax Blast, which Palau worked into the hair to create a clumpy, messy look.

Going along with the industrial theme of the collection, nails were painted in a matte nude hue. “The look today was inspired by concrete,” said Rita Remark, who led nails for Essie. “I wanted to have the nails look cold, a little neutral, but not skin tone.” To create the warm, neutral color, Remark first painted one coat of a taupe hue, named Sand Tropez, and then went over with a sheer, candy pink color, named Sugar Daddy. She then went over the nails with a matte top coat to create the dry texture.