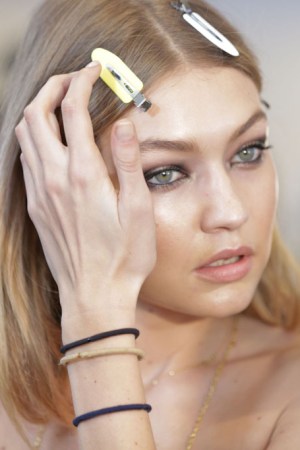 She made their skin appear fresh and highlighted, while lips remained nude.

“It’s very simple,” continued McGrath. “This is coming back again to strong makeup, but in a more wearable [way].”

She said the look was like something the models could do themselves.

“It is not the black eye of amazing, amazing skill,” she described. “It’s a much easier, fresh approach to glamour.”

Guido Palau gave a soft movement to models’ hair by creating bends in their tresses. “It’s not a bouncy curl,” he said.

To get the effect, he used a touch of Redken Wind Blown 05 Dry Finishing Spray and a large curling iron.