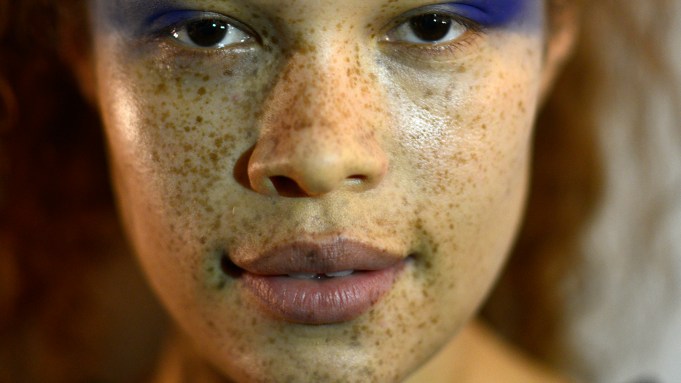 Known for its sporty looks, Chromat’s beauty this season alluded to an aquatic inspiration.

The makeup consisted of two looks focused on the eye. “This is a blue that I think me and the designer both really love and it seems to work on every skin tone,” said Fatima Thomas, who led makeup for MAC Cosmetics, on the cobalt blue hue used on the models. “It’s really a cobalt blue, but in my mind I just call it my Chromat blue combo.” The first look was a bold blue eyeliner drawn on the lower lash line. The line was first drawn with a lighter blue eye pencil, then emphasized with a darker blue eye shadow for a slightly smudgy yet defined eyeliner. For the other models, Thomas used the same products to draw a winged eye shadow from the end of the eyelid to the temple in a gradient pattern. The rest of the face was left as is, with minor touch-ups made where needed.

“We wanted a young girl with wet hair, kind of like she just emerged from the pool,” said Jon Reyman, who led hair for Aveda, on the three looks he created. Two looks consisted of shiny, slightly wet waves with one style emphasizing natural, fluffy curls made with a finger wave starting from the root of the hair. The last style was made to look extremely wet with the hair draped across the face with the help of oil and gel from Aveda.

A collaboration between Lady Fancy Nails and Floss Gloss, nails were painted in a way to reference the collection’s nod to safety wear. French manicures were applied to the nails with the tips in a murky green, gray or neon green. For some models, reflective tape was placed around the knuckles to catch light as they walked down the runway.