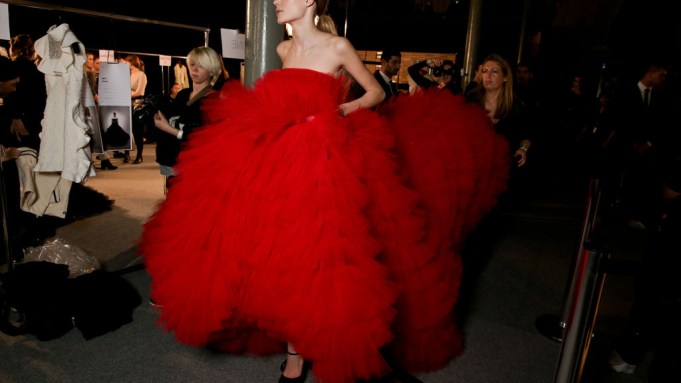 “We were looking at references from some shows during the Nineties, where the girls had more of a tougher tomboy look to them,” said hairstylist James Pecis.

Valli also wanted a just-out-of-the-shower feel to the models, prompting Pecis to use Oribe Maximista Thickening Spray and Supershine Moisturizing Cream to give tresses a heavier feel and lots of shine.

He parted hair to the side, sweeping it back into a low ponytail.

“We wanted to use these headbands in a very Nineties way,” he said, referring to grosgrain ribbon attached with elastic.

“So basically, it’s just about skin prep, about hydrating,” she explained.

Garland applied to models’ faces Lightful C Marine-Bright Formula Softening Lotion, serum, moisturizer and – in some cases – a touch of oil as a highlighter and Studio Waterweight SPF 30 Foundation. She also rubbed lips with a Q-tip to bring out natural color, then applied a balm.