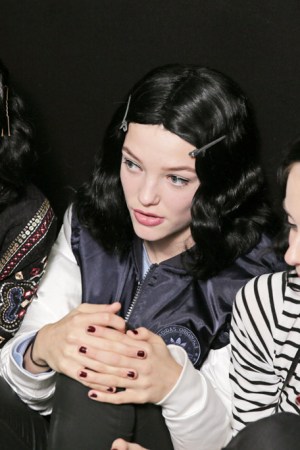 In fact, it is a product that was concocted especially for the show.

“Mr. Armani said he wanted a shiny liner, so we called the labs,” said Cantello.

The product was used close to models’ lash lines as well as along their eyelids’ top arcs, as was more the fashion in the Thirties or Forties than it is today.

“The lips are just dabbed on, it’s just this stain,” she continued. “It’s like a perfect lip.”

Inspiration for the wavy black hairstyles (each model wore an identical wig) was Greta Garbo and Mata Hari, said Orlando Pita. He used hairspray to make tresses shiny without a gelled effect.