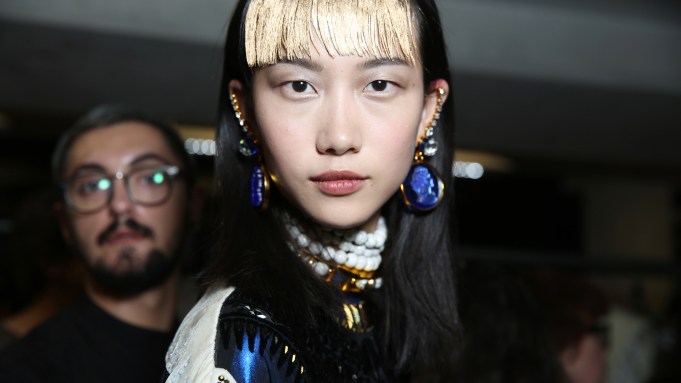 The “ice girls,” he explained, for instance, had very pale skin with eyelids awash with a sparkly cream to be reminiscent of water or ice. “It’s really, really shiny,” he said, adding the models also got oodles of mascara and a hint of flush on their cheeks.

Another set had darker eye makeup applied and more color on their skin.

Odile Gilbert said there were numerous hairstyles conceived for the show. “We have partings that are like a V, as in victory, and we have very sleek, super shiny low chignons that are supposed to look like lacquer. Another [look is] like a little hood with a pompom done in braids. A few girls are also natural,” she explained.

In models’ parts, Gilbert added a gold-colored pigment. “They’re tiny heads with a lot of shine,” she said.