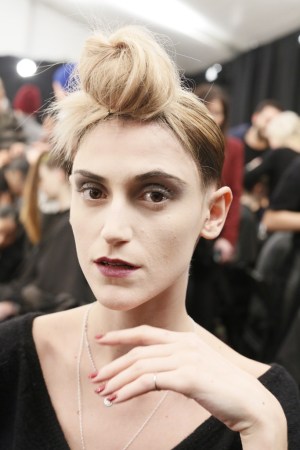 “This season, there’s makeup,” François Nars said wryly backstage at Marc Jacobs. (For those not in the know, last season, he sent the entire cadre of models down the runway sporting only moisturizer.)

This season, Nars built the cosmetics look around a strong lip. “Marc’s idea was to have a very strong, elegant, sophisticated woman, like Diana Vreeland,” said Nars.

After prepping skin with NarsSkin Multi-Action Hydrating Toner and NarsSkin Luminous Moisture Cream, he used his Sheer Glow Foundation, Radiant Creamy Concealer, Stick Concealer and Soft Velvet Loose Powder to ensure skin was matte and perfect. Next, he swept a gray-taupe eye shadow from his Paris Duo Eyeshadow across the eyelid, topping it with gloss to catch the light as the models headed down the runway. Nars then used his Train Bleu Velvet Matte Lip Pencil — a deep eggplant shade — on the lips. “It’s very matte, almost like velvet, and that feels contemporary to me,” said Nars. He skipped mascara, putting extra emphasis on the gloss on the eyes — “the only shine on the face at all,” he noted. “It’s always about balance. If you do a strong lip, you don’t want to overdo it elsewhere.”

Guido Palau, working with Redken at the show, fashioned a chic topknot at the top of the forehead. “It’s intended to be a very chic uptown girl, very considered,” said Palau. “This isn’t easy-breezy.” He began by saturating hair with Redken’s Guts 10 Root Volume Spray, then blew hair dry from the nape of the neck upward. He gathered hair into a ponytail at the top of the forehead and twisted it into a knot, securing it with pins, while leaving the tail of the pony free. He then used Redken’s Control Addict 28 High-Control hair spray to lacquer the back of the head and also used it on the tail of the pony to fashion chunky pieces.

Jin Soon Choi, working with Marc Jacobs Beauty at the show, used two upcoming shades of the designer’s nail polish at the show: Poison Apple, a candy-apple red, and White Snow, a semisheer white. Some girls had one shade on both hands and toes, others had a mix — Jacobs’ choice.