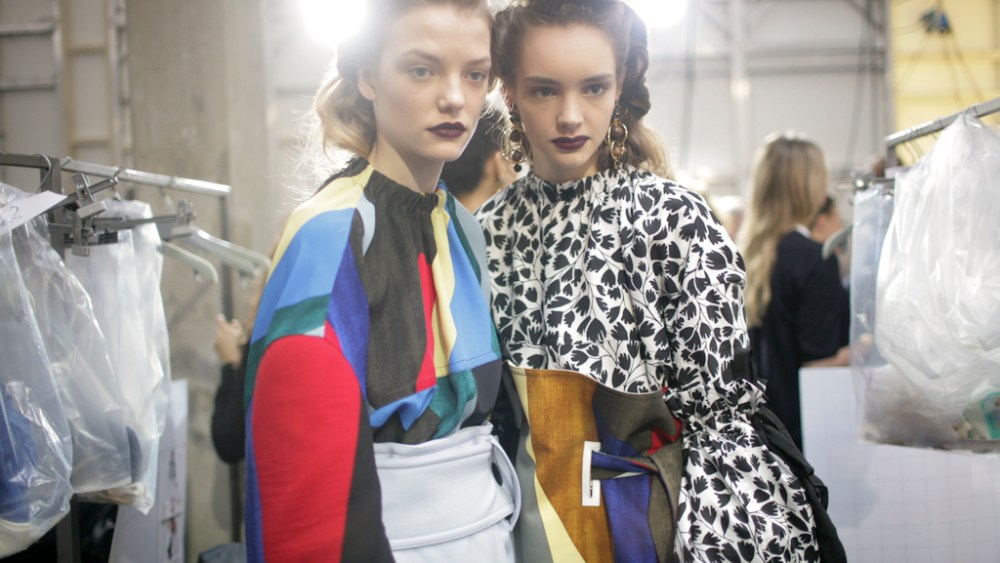 “The look is totally inspired from the black-and-white movie, ‘Rebecca’ — a sophisticated, but very intriguing woman,” makeup artist Tom Pecheux said of the Marni show. He singled out a focus on “dark, prune lips, but a very fresh and glowing face.”

Using MAC Cosmetics, Pecheux applied Studio Water Weight Foundation to the skin and color corrected with Prep and Prime Highlighting Pen. On cheeks Pecheux used Tight and Tawny Studio Quik Trik Stik for contour, and set highlights with Mineralize Pinwheel In Transformer. On eyes, he used Just Maybe Cream Color on the lid and Parisian Nights Lipstick in the tear duct for a little sparkle. Lashes were curled.

For the dark lip – requested by Marni designer Consuelo Castiglioni – Pecheux started out with Blind Score Casual Color, followed by Nightmotch Lip Pencil which was applied to the entire lip and blotted for a velvety texture.

Hairstylist Paul Halon referenced the Forties and actress Joan Fontaine’s perfect waves. “You have this real control in the front with very deep sprayed waves, and then in the back it evolves into slightly slept-in-bed hair,” he said.

Employing “lots of mousse and lots of L’Oréal Elnett,” Hanlon set hair in the front with a small curling iron. In the back, hair was twisted into knots to make it not too curly, then brushed out and secured with clips. Small strips of hair donut fabric were tied around the hair, which were later cut out, leaving an indentation in the hair.