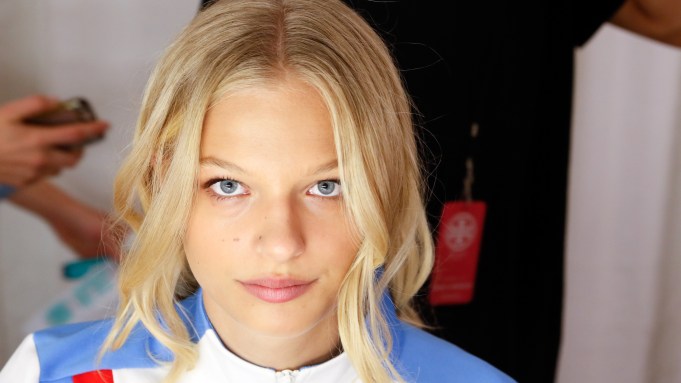 As the early morning sun shone through the windows of the Whitney Museum, makeup and hairstylists were bustling around to create a fresh, sun-kissed look that emulated an East Coast meets West Coast vibe at Tory Burch.

To bring the two inspirations together, makeup mixed bohemian style with some modern sophistication. “The girl is very confident with how she looks,” said Diane Kendal, who led makeup for Honest Beauty. “The West Coast is the bohemian part, but the East Coast is doing the eyes a little bit more and brushing the brows out.” For the bohemian look, Kendal used two natural blushes on the cheeks for a soft flush and then applied a taupe eyeliner to create faux freckles over the cheeks and nose. The eyes were enhanced with a brown eyeliner applied over the lash lines and blended outward for a sophisticated look that still looked fresh and youthful. A natural matte color was also applied to the lips to finish the natural look.

Guido, who led hair for Redken, interpreted the sophisticated bohemian inspiration with a classic half ponytail that emphasized texture. He created soft, beachy waves by using a texturizing shampoo and slightly curling the hair with a curling iron. Once the hair had a natural texture, he pulled a half ponytail from the temple for an easy style that looked refined and sophisticated. “That’s the appeal of hairstyles like this,” Guido said. “There’s a softness and a naivety to the simplicity which is very appealing. These hairstyles are the ones that real women want to try and replicate.”

Nails, which were led by Kim D’Amato for Priti NYC, were painted in a light pink with hints of beige for a soft, sophisticated color.