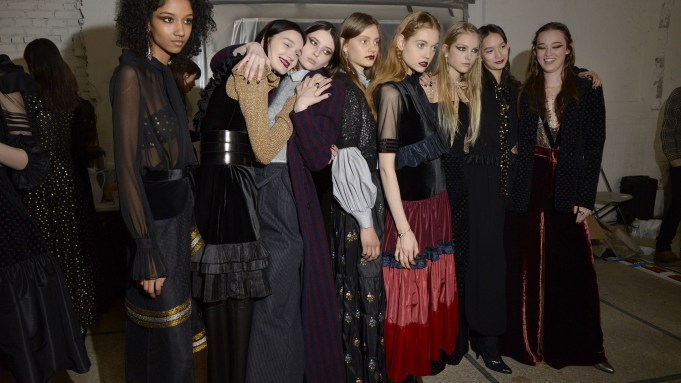 “It’s wintertime, so things are a little heavier,” said Aaron de Mey, who keyed makeup for Jill Stuart Beauty. “There are a lot of blacks in the collection and the accent color is a deep, rich burgundy plum, so basically I’m using that to influence the makeup.” To tailor to each model, de Mey created two looks for the show. The first look was a smoky cat eye in a chocolate brown instead of the traditional gray or black to balance out the heaviness of the collection. De Mey created the look using a brown eye shadow, blending it outwards to create the cat eye effect and then adding a metallic sparkle for some highlight. He topped off the look with a heavy gloss on the eye lids to juxtapose the skin’s matte texture. The second look consisted of a glossy deep burgundy lip to match the collection. De Mey also added a glossy eye lid to complete this look.

Hair was about highlighting each model’s natural texture, enhancing curls and adding volume where needed. For girls with longer hair, a loose, messy braid was made on the side of the head to play up the texture. “Basically the idea is that they did [the braid] themselves,” said Didier Malige, who led hair for René Furterer. “She doesn’t look like we’ve been spending too much time with her.”

For some models, a custom blended murky green color was painted on the nails. “It’s not a hunter green, it’s not even a taffeta green and it doesn’t have shimmer,” said Naomi Gonzalez, who led nails for Zoya, on the color which she blended with the brand’s Shawn and Willa hues. Because burgundy was the accent color for the collection, some models sported a similar hue on their nails for a regal touch.