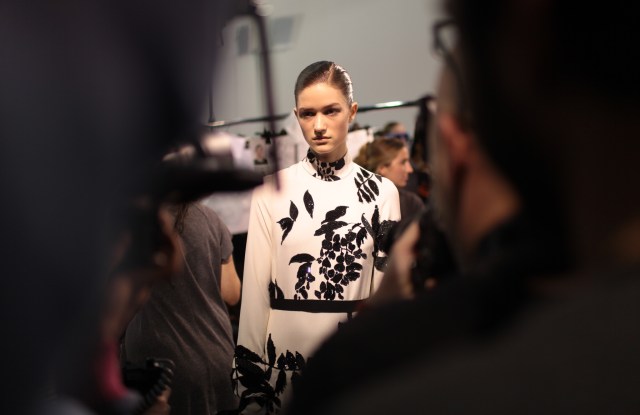 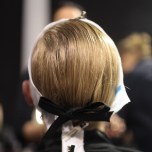 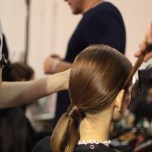 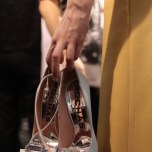 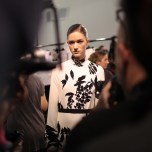 The beauty look for Rochas took a dandy-boy cue. Makeup artist Lucia Pieroni said she envisaged a “principle schoolboy meets prince charming” with a 17th-century twist thrown into the mix.

Pieroni used a new creamy burgundy-colored shadow from Clé de Peau Beauté, where she is makeup creative director. “It’s a soft, blended-out eye. But it’s supposed to look slightly tougher, a bit more sinister, less pretty,” she said. “There are gorgeous eyebrows, quite boyish and natural.”

Models’ skin was given a creamy texture, too, and their cheeks were highlighted. Lips got a lashing of nude hued lipsticks.

“It’s all very toned and soft, with a little bit of an edge,” she continued.

Rochas’ creative director Alessandro Dell’Acqua wanted models’ hair off their faces, Hanlon explained. So their tresses were parted to the side.

“It’s very boyish, kind of like Bowie almost [in] the front,” he described, explaining in the back of heads was fashioned a very tight low ponytail that’s rolled up on itself, like tails of Dressage horses. Then a fine net was wrapped around it to keep the shape contained.

“When they move, it looks very done,” said Hanlon.

Then the last step was looping hair around the net and elastic, and fretting a black bow higher up on models’ heads. “When you tie it, it pulls the back of the hair,” he continued. “We’re just trying to give it a little bit of refinement.”