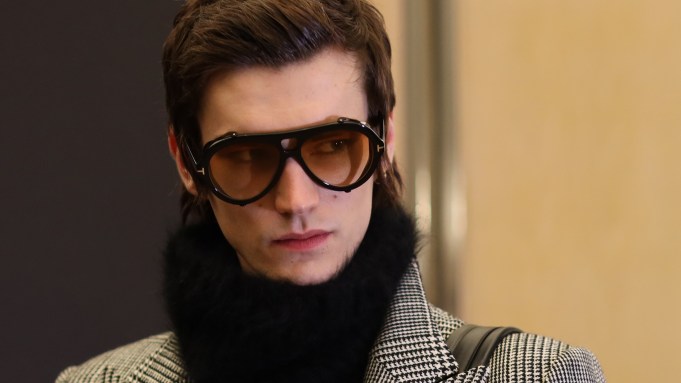 Backstage at Tom Ford’s Oscar weekend show in Los Angeles, hairstylist Duffy described the look as “masculine, tight and tailored.” Sleek with a deep side part, the hair is folded, “not rolled” he underlined, “to emulate the shape of a boy’s head.” There was a touch of softness, however; every girl wore a flower created out of feathers that Ford had made.

“It’s the classic Tom woman,” he said of inspiration. “She’s strong, independent. It’s the idea of a tailored haircut and more tailored shape, which is always something he’s worked with.”

The makeup — using all Tom Ford Beauty — was Hollywood glam, shared makeup artist Diane Kendal. Her focus was on prepping “gorgeous skin,” she said. For a dewy finish, she applied the “Shade and Illuminate Soft Radiance” foundation with SPF, as well as the duet shading and highlighting palette. Using warm tones of golds, browns, reds and purples, she customized each model’s eye shadow look.

For all, she used a brown pencil “to line the top of the lid, underneath and into the [crease].” She then blended it out, used varying eye shadows on top of the line and applied a gold color at the center of the lid. To finish off, black eyeliner was used on the inside of the waterline, and mascara was put on the top and bottom eyelashes. Lips were kept minimal — covered in foundation and lip gloss — as were the eyebrows, which were filled in where needed.

“We don’t want to make them too defined,” she added. “And when the girls are in lineup we’re going to apply a little bit of lip gloss just on the lid…to give that sensuous feel.”