LAS VEGAS — In a city given to spectacular promotional overtures, Evelyn Lauder pulled off a stunt last week that stopped casino-bound tourists in their tracks when she and her crusading partner, Elizabeth Hurley, bathed the Venetian Resort here... 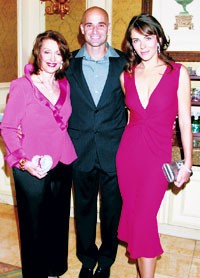 LAS VEGAS — In a city given to spectacular promotional overtures, Evelyn Lauder pulled off a stunt last week that stopped casino-bound tourists in their tracks when she and her crusading partner, Elizabeth Hurley, bathed the Venetian Resort here on the Strip in a pink afterglow of light.

“We want people to look up and say, ‘Why is it pink?’ And the answer is that it signals the beginning of breast cancer-awareness month,” Lauder, who is senior corporate vice president of the Estée Lauder Cos. and founding chairman of the Breast Cancer Research Fund, said while walking from the canal bridge where the lighting took place and the Venetian for a cocktail party.

The pair flipped the ceremonial pink light switch in front of hundreds of supporters, Hurley fans and surprised passersby as one of the last events in a day crammed with public appearances and TV interviews designed to spread their message of prevention.

Lauder and Hurley first arrived at Neiman Marcus at the Fashion Show Mall for a noon personal appearance with the store’s VIP customers, complete with pink champagne and roses. Sales of the company’s fund-raising merch was brisk: the $250 crystal-decorated silver compact that benefits BCRF 100 percent, as well as Lauder’s book of photographs, “An Eye for Beauty,” went quickly as fans lined up to have their multiple buys autographed.

Ninety minutes later and a quarter of a mile away at the Estée Lauder boutique at the Forum Shops at Caesar Palace, the scene was repeated with hundreds gathered around a pink-carpeted stage to witness Mayor Oscar Goodman hand the city’s golden key to Hurley, Lauder and her husband, Leonard Lauder, chairman of the Estée Lauder Cos.

Evelyn Lauder stopped by the Coach store nearby, where several of the items specially made to raise funds for BCRF were on display. Brands including DKNY, Burberry, Wolford and Keds participated in this year’s catalogue.

At Coach, Lauder pulled out her platinum American Express and snapped up the $398 hot pink and mother-of-pearl watch the company created for the foundation.

A fashion show with more pink product and bubbly started the evening at the Venetian. Then came the lighting, which was part of the BCRF’s fifth annual Global Landmarks Illumination Initiative. This year, the program includes Graceland in Memphis; the city hall in Vienna; Niagara Falls in Ontario, Canada, and the Royal Opera House at Covent Garden in London, among 20 other landmarks worldwide.

“This is the first time we’ve been to Vegas and the enthusiasm and support from the people here has been so heartwarming,” Lauder said in between the silent auction and fund-raising dinner at Bouchon, the French restaurant at the Venetian.

The fund-raising and education concern Lauder founded in 1993 has raised more than $97 million so far toward clinical and genetic breast cancer research.