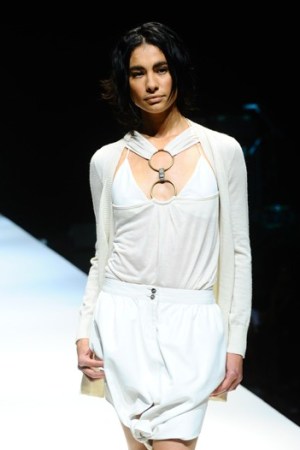 AnnaRose Kern and Robert Ramos helmed the makeup and hair teams, respectively, at the shows put on by BOXeight from March 13 to 15 at the Los Angeles Theatre. Kern employed cosmetics from a BOXeight line slated for release in the summer, and Ramos used his namesake hair care line launched last year to service the 20 or so shows.

Hewing to the Goth theme of several shows, Kern pointed to a strong, black eye as chief among the makeup trends. Another trend, foundation-covered matte nude lips, made the dark eyes pop. Ramos highlighted braids and faux bobs constructed by tucking under long locks as recurrent hair concepts.

A few of the standout shows for beauty were Smoke & Mirrors, The Battalion, SkinGraft and martinMartin, which Kern called her most challenging. At martinMartin, both sexes sported short, fringe bangs and dramatic, geometric eye makeup.

“We created uniform androgyny,” said Kern. “It got a lot of attention because typically you don’t see a lot of theatrical makeup on male models.”

Smoke & Mirrors’ partners, Emily Brandle and Michelle Chaplin, opted for two makeup choices. Half of the models wore thick glasses and the makeup focused on bright red-orange lips. A considerable helping of black mascara and a green cat’s eye shape blended with black at the eye creases drew attention to the eyes on the models without glasses.

Hair was looped into bows atop models’ heads with loose hair below that Ramos described as “teased out, but not too teased out.” “They wanted it not too edgy, but not too pretty. It had to be on that fine line,” Ramos said.

Three makeup varieties were presented at The Battalion: a natural, sun-kissed look to fit a Native American inspiration; creamy skin, lip color rosettes and gray eyes for a militaristic look intended to evoke centuries long past, and deep smoky eyes harkening back to Eighties-era punks.

“The Battalion was one of my favorites,” said Ramos. The hair drew upon the Native American inspiration with braids in the back of the hair and on two sides, and the rest straight down. “Very Pocahontas,” mused Ramos.

At SkinGraft, the hair was parted in the middle and down, and texture was manufactured by flat ironing pinned hair fashioned into loose figure eights. The dark eyes returned for the show, where they were rimmed in black. “I got a lot of reactions to the SkinGraft show because it was very intense,” said Kern.

With fashion week ending, Kern, along with BOXeight creator Peter Gurnz, will resume work finalizing BOXeight makeup. It will launch on BOXeight’s Web site initially with eight items — bronzer in two shades, liquid eyeliner in two, lip gloss in three and an eye shadow quad — ranging mostly from $14 to $30.

“The thing that I want to do with BOXeight is marry fun and function,” said Kern. The eyeliner contains an algae complex called BioBoost to encourage lash growth. The lip gloss has 24-karat gold to enhance fullness.

Ramos is adding Styling Spray, at roughly $20 for 10 oz., to his product assortment next month. He said the lightweight spray came in handy during the shows. “It will hold, but you can work with it, and it won’t build up,” he explained.