Aramis is playing a match of mixed doubles with Always, a new fragrance duo for men and women. 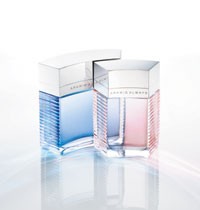 MUNICH — Aramis is playing a match of mixed doubles with Always, a new fragrance duo for men and women.

Aramis Life spokesman Andre Agassi is back on the court for the new project, this time joined by his wife, tennis legend Steffí Graf, who now goes by the name Stefanie.

Aramis will market the duo, which includes Graf’s first scent, as the epitome of the pair’s life and love story.

“It’s about their loyalty and commitment to each other,” Fabrice Weber, president of Aramis and Designer Fragrances, said at the Always launch in Munich Monday, “and the Aramis initiative is to reflect this true story.”

The duo worked closely with Raymond Matts, vice president of corporate fragrance development for the Estée Lauder Cos., and Firmenich on the creation of the scents.

While Aramis produced women’s scents in the Seventies, the 41-year-old Lauder-owned brand has its roots firmly in the men’s market. For the last 10 years, it has had a men’s-only focus.

The reentry into women’s “is a huge deal,” Weber said, but it had more to do with opportunity than strict calculation.

“The concept was stronger than any consideration of strategy,” he remarked. “When you have someone like Steffi Graf and Andre Agassi literally volunteer to do a fragrance project, it’s something you go for. It’s almost self-explanatory. Plus, consumers recognize genuine stuff, and they’re genuine,” he stated.

Aramis Always for Him and for Her will be launched in all markets outside the U.S., except Italy, in early February. Aramis’ full distribution, not including the U.S., has been placed at between 10,000 and 12,000 perfumery and department store doors. The timing of a rollout in America has not yet been determined.

Although Weber would not put a figure on first-year sales goals, industry sources estimated the scents could generate $50 million to $60 million at retail, excluding the U.S.

The men’s fragrance makes a fresh initial impression through nuances of lime and ginger combined with lemon and mandarin. Its heart is cool and minty, touched with marigold and cardamom, whereas cedar and vetiver are intended to leave a memorable, lasting impression.

This story first appeared in the October 26, 2005 issue of WWD. Subscribe Today.

Always for Her is a soft, floral scent, with a head note of mandarin, citrus and watercress, a heart of magnolia and hibiscus and a soft bottom note of milk, Chinese incense and exotic woods.

The pale blue men’s scent and pale pink women’s fragrance shimmer through ridged, glass bottles, which are designed to form a ring — think wedding band — when several sizes are combined. Platinum caps are a nod to the rings with which Agassi and Graf plighted their troth.

Photographer Peter Lindbergh shot the print ads for Always in Paris, which feature the couple in black and white and the bottles in color. Agassi said the City of Light was chosen “because that’s where it started for us.”

To promote the scents, sampling will be heavy, Weber said, with both fragrances packaged together. “Our job is to make sure they’re merchandised together in-store, which will be a challenge” as men’s and women’s fragrances are not usually shelved together, noted Weber. “But these two scents are linked at the hip.”

With three months to go until the masterbrand is launched, promotional activities at point-of-sale are not yet fixed, but both Agassi and Graf have agreed to dedicate some time to personal appearances, the company said.

As for the Aramis brand, Weber said it’s “doing well in the current men-only position. Bringing Andre on board made it easy to create new territory and attract new customers. The overall [Aramis and Designer Fragrances] division has had a very fortunate two years, with the success of Donna Karan Be Delicious and the continued evolution of the Tommy Hilfiger franchise, which really added a new community of customers.”

Industrywide, however, he said fragrance is “a challenged industry. We’re all suffering from the excesses of too many launches, the demands of consumers for too many new developments and the tendency to massify at distribution. But there are high rewards for quality and concepts that resonate with the customer. The industry may be going through a year or two of clarification, but there’s hope.”