Beauty Bars Popping Up in Paris
PARIS — Without even so much as a drop of free-radical-busting red wine in sight, people are nevertheless acquiring a taste for beauty bars here.

Shu Uemura and Frederic Fekkai have... 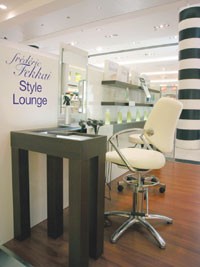 Beauty Bars Popping Up in Paris
PARIS — Without even so much as a drop of free-radical-busting red wine in sight, people are nevertheless acquiring a taste for beauty bars here.

And industry insiders don’t think this is just a flash-in-the-pan phenomenon.

“More and more, women need personalized service,” Vergely added. “They want us to take care of them because they’re tired of going to shelves and having to find things by themselves.”

When French hairstylist Fekkai teamed with Sephora to open his so-called Style Lounge, the idea was to create a lather of excitement in the LVMH Moet Hennessy Louis Vuitton-owned perfumery chain’s Champs-Elysees flagship.

Going back to his roots, Fekkai set up a pied-a-terre in the boutique in May. With sessions lasting between 10 and 20 minutes, the Style Lounge is designed to be a hairstyling pit stop for young Parisian men and women alike. From 9 a.m. to 9 p.m., clients can be pampered by stylists using products from the Frederic Fekkai hair care line.

Natalie Bader Michel, Sephora’s European marketing manager, said the perfumery wanted to “offer a new, trendy and practical service to our customers. The first idea was to enter the hair business [in a high-end way], meaning we wanted to propose very selective products linked with luxury and fashion. After that, the idea was also to propose innovative new services that really correspond to the needs of today’s woman.”

Such a woman is in a hurry — so much so that Sephora extended its existing beauty bar concept earlier this month by grouping services, including manicures and skin analysis, into one space.

Back on Boulevard Haussmann, at its flagship address, PPR-owned department store Printemps will unveil a skin care bar, dubbed Beauty Lounge, in October. The 538-square-foot area is to feature 27 treatment brands, including Doux Me, Erbaviva, Ethos, Nuxe and Caudalie, for easy consumer access.

“It will make a difference because we have the biggest beauty space in the world,” claimed Fabien Petitcolin, Printemps’ makeup and skin care buyer. “It’s so big, with so many brands and so many stands, that a certain type of customer needs bars as a way to access beauty initially and experiment with brands.”

Petitcolin noted that customers are less intimidated by smaller, more intimate beauty bar concepts and those staffed by nonbrand-specific employees. There, he said, consumers tend not to feel pressured into buying.

The opening of Beauty Lounge follows on the success of the store’s Makeup Bar, which was unveiled last year.

Here, a taste of the services and products that are offered in some of Paris’ recently opened beauty bars:

— By Jennifer Barton and Veronica Gledhill with contributions from Brid Costello

Carlson to Exit NPD Beauty
NEW YORK — Timra Carlson is stepping down as president of NPD Beauty U.S., an organization that she has led since its inception in 1996.

Carlson, who said she was leaving to relocate to New England to be closer to her family, is being succeeded by Diane Nicholson, effective July 1. Nicholson has been with NPD for more than seven years. She launched NPD’s Fashion Footwear business and rose through the ranks to become president of NPD Fashionworld. Most recently, she headed NPD’s Financial Services business.

Before joining NPD, Nicholson had 12 years of experience in manufacturing and retailing, at R.H. Macy’s, May Merchandising Co. and Liz Claiborne.

Carlson joined NPD 17 years ago as an analyst in the footwear division before switching to beauty, where she built the fledgling tracking service into the indisputable authority in the prestige fragrance and cosmetics business. Before joining NPD, her first job out of college was in the financial department of Wang Laboratories in Lowell, Mass.

She is returning to that area, having bought an 1850 farmhouse, complete with pond, near North Andover, Mass., where she will live with her husband, Rich, and their two-year-old daughter, Lily.

Dennis G. Brown, group president of beauty, house and fashion at NPD, stated, “We will miss having Timra at the helm, but I am pleased to let you know that she will continue to be involved in the business in an advisory capacity as we continue to expand the service.”
— Pete Born