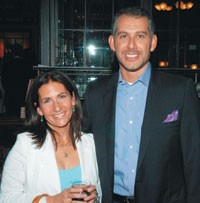 Brown, Klein Feted By Friends In Deed
NEW YORK — Makeup artist Bobbi Brown, chief executive officer of Estee Lauder Cos.-owned Bobbi Brown Cosmetics, was honored Monday night by Friends In Deed, the 14-year-old organization dedicated to supporting those with AIDS and cancer, their caregivers and those dealing with grief and bereavement.

Ross A. Klein, president of W Hotels Worldwide, was also honored during the cocktail party and dinner held at Balthazar.

“They are both profoundly generous human beings in many ways [and] totally in line with Friends In Deed,” said Cynthia O’Neal, the organization’s president. “They are givers and care about other people.”

Organizers pointed to Brown’s efforts with Dress for Success; she recently joined the board of the organization, which helps low-income women make transitions into the workforce by providing them with professional attire. Also cited was Brown’s involvement with Jane Addams Vocational High School in the Bronx, where, in the past few years, Brown began regularly donating discontinued makeup and magazines from her company to the school’s cosmetology program — and supplies like baby formula, diapers and blankets to its day-care center.

“I’m overwhelmed and humbled,” Klein said. “When I was thinking about my association with Friends In Deed, [I realized] it’s been 12 years. They were there for me 12 years ago and now I’m here for them.” Originally, Klein volunteered with Friends In Deed. Then, speaking frankly, he said, “someone close died and I became a client.”

Brown, who said she doesn’t often talk about it, mentioned a stepbrother who died of AIDS more than a decade ago. “[Friends In Deed] is about people who help people. It’s not corporate. They just get into it — doing [services] for people with AIDS and their families.”

During a lighter moment in the evening, a magician performed a card trick for Brown, which resulted in the six-of-hearts — with “Bobbi” scrawled on it — stuck to the ceiling of the restaurant. “I already hired him for my kid’s bar mitzvah,” said Brown, adding, “come into Balthazar, see my card.”

The soiree aimed to raise $300,000 for Friends In Deed via table bookings and a live auction of five luxury packages that featured travel, theater, and sporting events. Since 1991, Friends In Deed has raised as much as an estimated $15 million.
— Matthew W. Evans

The namesake grandson of the diversified Italian fashion house’s founder stopped by Neiman’s to meet fragrance fans and celebrate the latest vintages from his family’s Il Borro winery — which includes the brands Il Borro, Pian di Nova and Polissena — as part of Neiman’s “Taste of Tuscany” event.

The Ferragamo family owns a 2,000-acre country estate and winery in the lush Tuscan hills, a short distance from company headquarters in Florence. Salvatore Ferragamo, who is 32, oversees the estate, its winery, cattle business and 29 rental villas located on the property, which includes a medieval village. His twin brother James is director of Ferragamo’s women’s leather goods.

Subtil Pour Homme has top notes of mandarin, lotus leaves, cardamom and ginger; middle notes of coriander, bay rose, macy, davana and violets, and a base of patchouli, dry amber and musk. Its packaging includes a twisting, slate-blue and silver bottle. Retail prices for the line range from $23 for a 2.6-oz. deodorant stick to $72 for a 3.4-oz. eau de toilette spray. Other products include aftershave lotion and shampoo and shower gel.
— Rusty Williamson