By Nina Jones and Stephanie Epiro and Brid Costello and Michelle Edgar on December 5, 2007
View Slideshow 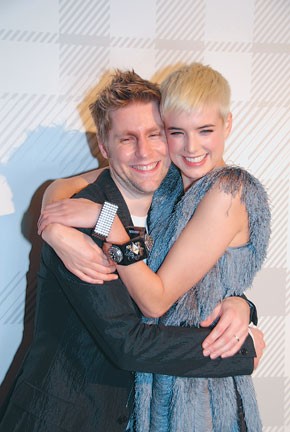 LONDON — Christopher Bailey sure knows how to set pulses racing. The Burberry designer strategically placed a 3-ton chandelier featuring hundreds of cascading bottles of The Beat, the brand’s latest fragrance, above a dance floor throbbing to the beat of rock band The Fratellis on Monday night.

“He’s a genius,” chimed Daisy Lowe, referring to Bailey, who, with Agyness Deyn, the face of the scent, hosted the soiree in London’s Koko club. If the tinkling installation wasn’t enough to keep the crowd moving, giant prerecorded images of a dancing Deyn were projected onto screens around the boîte.

“I was dancing to all my music, so it was great,” said the model, who has a penchant for the Sex Pistols and The Libertines. While Deyn’s good looks and stamina may have helped her cinch the contract with Burberry, it seems geography also might have played a part. “She’s a northern girl like I’m a northern boy,” said Bailey with a smile.

U.K. Airport Retailer Up for Sale

Airport Development and Investment Ltd., a consortium led by Spanish infrastructure group Ferrovial, which acquired the British Airports Authority along with its WDF division last year, is looking for a buyer for the retailer, according to a statement released by WDF Tuesday.

“Following its acquisition by the Ferrovial-led consortium ADI in June 2006, all BAA’s noncore airport activities, including World Duty Free, were placed under a strategic review,” the statement said. “This review has been ongoing and the group’s recent decision to seek a buyer for World Duty Free is the outcome of that review.”

WDF has 62 stores in seven U.K. airports. As reported, rumors surfaced earlier this year about a possible divestiture.

MILAN — When it comes to his fragrance manufacturing, distribution and licensing firm, Roberto Martone, president of ITF-ICR, likes to keep it in the family. Martone has announced that his eldest daughter, Giorgia Martone, has taken on a new role as marketing director for Lodi, Italy-based ITF, the licensing arm of ITF-ICR.

Giorgia Martone returned to Italy last year after a stint in New York working for Symrise and ITF’s U.S. affiliate. She has worked on the company’s Dsquared2 fragrance license, and helped launch the brand’s first scent, called He Wood, earlier this year. She will remain brand manager of the Dsquared2 fragrance brand, but also will manage marketing strategy and product development for ITF’s other fragrance licenses, including Blumarine, Ferré and Roberto Cavalli.

“I am excited to be working on the set of fantastic fragrance projects we have lined up for 2008,” said Martone.

ITF-ICR is on track to record a 7 percent increase on total consolidated revenues for this year.

LONDON — Topshop is channeling the boudoir this Christmas. After the success of its in-house salon, The Blowdry Bar, the store has launched a temporary grooming station in its Oxford Circus flagship called The Powder Room.

The girlish space, which launches today and is open through to Dec. 16, will offer makeovers by Shu Uemura makeup artists, treatments by Dermalogica and hairdressing by John Frieda stylists, alongside manicures and eyebrow threading — all free of charge. A spokeswoman said the room is designed for customers heading out to post-shopping parties during the festive period.

There will also be a miniature store in the area, where customers can buy accessories to complement their party outfits.

It’s not Topshop’s only show of Christmas spirit — the store is doing its bit for charity, too. Topshop will offer charity water at 10 British pounds, or $20 a bottle, sales of which are earmarked to fund fresh water projects in Africa, and charity Christmas cards, whose sales will go toward AIDS charity the Terrence Higgins Trust and Fashion Targets Breast Cancer.

NEW YORK — A new Web site called Totalbeauty.com aims to present product information, videos on beauty how-tos and communication among consumers all in one place when it goes live on Thursday.

The site’s founder, Emrah Kovacoglu, who most recently worked for two years as vice president of new media in Procter & Gamble’s beauty division, said she saw a need in the marketplace for a product library covering beauty items in the mass, prestige and spa markets that acted as a consumer’s personal beauty consultant.

“I wanted to create a comprehensive one-stop shop beauty portal resource that provides answers to any beauty question from a consumer standpoint,” said Kovacoglu. The site already boasts 35,000 members and ratings and reviews on 35,000 products from more than 220 brands by both industry experts and consumers.

Totalbeauty.com also features more than 50 interactive video demonstrations. Visitors can fill out a questionnaire that’s designed to tailor a skin care regimen for them and recommend certain products based on skin type. The site also features chat rooms where consumers can connect with each other to discuss beauty issues.

As an incentive to sign up, members receive product samples and coupons from retailers. In addition, a sweepstakes will be held to help generate product reviews.