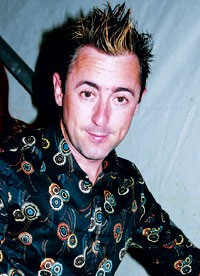 Samaritaine’s Beauty Floor Is the Biggest in Continental Europe

“Alan’s always been an extremely good client, and making this fragrance was the perfect scenario,” said Brosius. “It’s very smart, witty, amusing, versatile and very sexy — like Alan himself.”

The scent’s small distribution will generate “easily” $500,000 in first-year retail sales, said Jason Schell, marketing director for Christopher Brosius Studio and Perfume Gallery. “It will be sold in independent beauty stores like A Beautiful Life in New Hope, Pa., and possibly Barneys or Sephora,” he noted.

Brosius won’t do traditional advertising, preferring instead to do launch parties — like the one planned for Monday night at Space Downtown to unveil Cumming’s new scent. Promotional support for the fragrance will come through press on Cumming’s upcoming films, including this year’s “Mr. Ripley’s Return,” next year’s “Son of the Mask,” and “X-Men 3,” coming out in 2006.

NEW YORK — The doctors are in — Henri Bendel, that is. On Tuesday night, dermatologist skin care brand Rodan + Fields celebrated its launch at the specialty retailer with personal appearances by dermatologists Katie Rodan and Kathy Fields, who signed their book, “Unblemished.” More than 200 fans dropped in over the course of the day.

“It’s great to meet everyone, hear their concerns and give them advice,” said Rodan. “Bendel’s is known for the new, as being more of a risk-taker and it’s exciting to be part of their vision to expand into skin care.” Fields agreed, saying, “If [consumers] have clear skin, all of the other glamorous beauty products will work better,” she said.

Rodan + Fields general manager Shashi Batra, who joined the company early this year after it was acquired by Estée Lauder Cos., cited the importance of building the brand’s presence in New York. “We were looking for a presence in New York and Bendel’s is known for nurturing brands,” said Batra. “We think it’s a wonderful platform that really speaks to our customer base.”