The Italians showed their love for Tom Ford on Wednesday when a crowd of more than 700 fans gathered for a personal appearance by the designer at La Rinascente's Piazza Duomo store here. 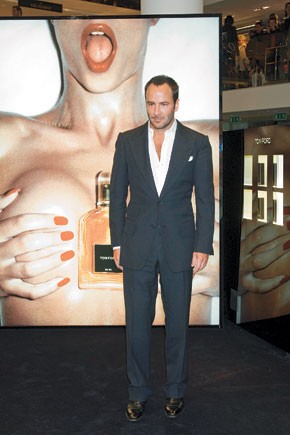 Fans Come Out for Tom

MILAN — The Italians showed their love for Tom Ford on Wednesday when a crowd of more than 700 fans gathered for a personal appearance by the designer at La Rinascente’s Piazza Duomo store here.

Ford was on hand at the store to promote the European launch of his Tom Ford for Men scent and to autograph bottles for customers.

Spilling out onto the street from the beauty department’s ground floor and packing the balcony of the floor above, Ford’s fans queued for hours to meet the designer. At the event, Ford posed for cell phone photos, blew kisses and signed not only his scent, but also the inside cover of his biographical tome “Tom Ford,” and Gucci merchandise from his era as creative director for the company.

“It’s always great when people turn out and respond to what you’re doing and show you they like what you do,” Ford said. “It’s also always a little surprising.”

His personal appearance was called a “spectacular event” by the department store’s management. In Ford’s two-hour appearance, La Rinascente sold 500 flacons of Tom Ford for Men — in 50-ml. versions for 52 euros, or $74.75 at current exchange, and 100-ml. bottles for 75 euros, or $107.85, and stocks of the scent had to be replenished during the evening, according to a La Rinascente spokeswoman. The event generated sales of roughly $46,000.

After launching 15 scents in the past year and continuing a collaboration project with the Estée Lauder Cos. Inc. on color cosmetics, Ford said he had other beauty projects in the pipeline. The designer hinted that a men’s skin care and grooming line would be added to his portfolio but declined to give specifics.

Meanwhile, Ford’s other scents continue to perform well, said a Tom Ford Beauty spokeswoman at the event, who added the glassblowers creating the flacons for his Private Blend Collection were struggling to meet demand.

“It is a constant, consistent stream of sales,” Ford said of the high-end, custom juices, adding that although more units of Tom Ford for Men are being sold within his eponymous New York store, Private Blend accounts for more dollar sales.

This story first appeared in the October 29, 2007 issue of WWD. Subscribe Today.

“All the fragrances are doing really well. We launched Black Orchid Voile de Fleur, an eau de toilette, and we actually thought that it would become bigger than Black Orchid because it’s more commercial. What’s happened is that it’s just reenergized Black Orchid and our sales have gone up dramatically, which you usually don’t see in a second year of a fragrance when you launch 12 different private blends along with the men’s scent,” said Ford.

More than 1,000 fans (some who had been on line for more than 24 hours) showed up to greet Carey, who arrived in a black Bentley Phantom convertible. Fifty of those customers popped for a $305 gift set, which entitled them to a photo op and autograph at a private session held after Carey left the sales floor.

“Mariah Carey’s personal appearance at Macy’s Herald Square on Tuesday generated a tremendous amount of excitement from her grand arrival at our Broadway entrance to her walk down our main aisle with a drum line playing,” said Micheline Jordaan, vice president and divisional merchandise manager of fragrances for Macy’s East. “We are very pleased with the performance of the fragrance. This truly has been one of our best events.”

“While we expected the personal appearance to go well, especially considering that fans camped out to buy the $305 package that sold out in 10 minutes, the appearance exceeded all expectations,” said Joel Ronkin, executive vice president and general manager, North America Fragrances, of Elizabeth Arden, Carey’s fragrance licensee. “This was a great team effort from all.”