And, carrying light opening notes of coriander, pear and pepper, the "soft oriental" goes almost straight to its heart of exotic iris and Bulgarian rose, with a soft... 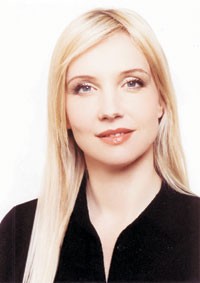 And, carrying light opening notes of coriander, pear and pepper, the “soft oriental” goes almost straight to its heart of exotic iris and Bulgarian rose, with a soft drydown of musk, Tonka bean and cedar.

Composed by Firmenich’s Oliver Cresp, Jette will hit the shelves of about 2,000 selective perfumery doors in Germany as well as Lancaster’s full selective distribution in Switzerland, Austria, Benelux, and duty free in August. A rollout will follow about six months later in the Mideast, Australia, the Canary Islands, and in eastern and northern Europe. Industry sources estimate the fragrance could generate first-year sales of $20 million.

Lancaster, which signed this second generation Joop license last year — it also holds the fragrance license of Jette’s father, Wolfgang — is banking on Jette to win over a younger clientele to the glamour and accessibility of its well-known namesake. No stranger to the society pages, 37-year-old Jette Joop is also a multifaceted designer of everything from jewelry and jeans to bathroom fixtures and a prefab house, a business that generated revenues of about $75 million last year.

But Jette Joop is more than the face behind the scent — or the body in its ad, photographed by Laurie Bartley and slated for single- and double-page exposure in German magazines this fall. The Oxford- and California-trained designer was also art director for the overall launch campaign. She also designed Jette’s skewed heart-shape bottle of pale purple glass.

The scent, too, has a lilac hue, a color Joop summed up as “a very European and elegant color. It reminds me of the 1930s, and it’s a tiny bit retro, but subtle,” she said, as is the heart-shaped shadow on the box.

This story first appeared in the May 11, 2005 issue of WWD. Subscribe Today.

Françoise Mariez, senior vice president of fragrance marketing for Lancaster, termed the Jette launch “the most important event of our second quarter.” She expressed aims for the scent to quickly achieve a place among Germany’s top 10 fragrances. “Our distribution is really behind this launch, as Jette is very well-known in Germany,” said Mariez. “And there’ll be high pressure in terms of sampling, windows and special personal appearances in Germany’s major cities” — to which Joop emitted a good-natured groan.

“I just did personal [appearances] for the fashion part [of the Jette business], and it’s tedious but wonderful,” she remarked. “It’s so important to be in dialogue with the consumer, and you get so much back. Maybe it’s something some designers don’t do, but it’s the best one can do.”

Despite many years spent in the states, neither Joop nor Lancaster have the U.S. in their sights, at least for the scent. “Everyone dreams about the American market, but it’s very tough, and the merger of Federated and May just made distribution tougher,” said Mariez. “Advertising is extremely expensive, too,” she added.

“I like the U.S. personally, having lived there for over 10 years,” Joop said. Automotive design was among her studies in the U.S., and she also worked for Neiman Marcus and Bergdorf Goodman before designing jewelry for Barry Kieselstein-Cord — and then briefly for Ralph Lauren. But Germany is her home market, she stressed, and it needs to be fully developed first.

Still, her line of in-line skates, produced in cooperation with K2, seems to have made inroads into the States, she reported. “Shoes and sneakers will follow,” she noted. “If I get in [to the U.S.],” she predicted, “it’ll be via accessories and jewelry.”